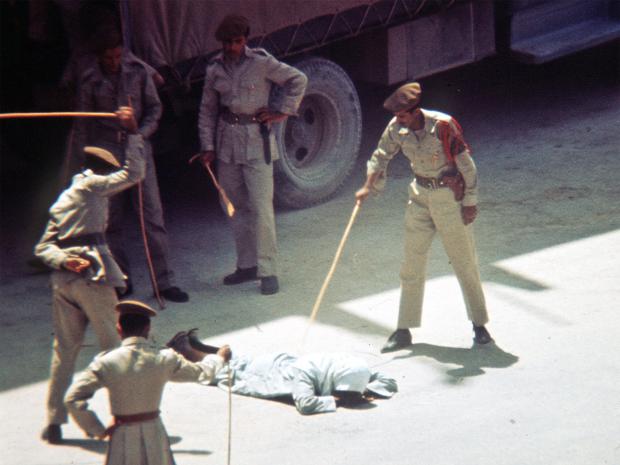 Professional executioners in the kingdom at times behead multiple victims in a single day, most often for the crime of free expression, human rights activism, or other forms of dissent against despotic rule.

Religious police perform public whippings for not praying at designated times when in public, improper dress code, non-observance of gender segregation, breaking into private residences violently on suspicion of illicit behavior, and other nonconformity with Wahhabism.

It's the most extremist form of Sunni Islam, calling Shias and other non-Wahhabis "infidels," encouraging intolerance, supporting terrorism, what Saudi Arabia is all about, the most despotic Arab state.

It's unconcerned about horrendous human rights abuses, only about how it's perceived by the international community, mainly the US-led West.

Saudi minors found guilty of nonviolent offenses can be beheaded, whipped or stoned to death brutally.

The State Department's annual report on human rights in the kingdom explains the same violations each year, the latest report saying:

Other human rights violations include "arbitrary arrests and detention; political prisoners; arbitrary interference with privacy; criminalization of libel, censorship, and site blocking; restrictions on freedoms of peaceful assembly, association, and movement; severe restrictions of religious freedom; citizens' lack of ability and legal means to choose their government through free and fair elections; trafficking in persons; violence, official discrimination against women, and prohibition of trade unions."

The Saudis partner in US regional wars of aggression, notably in Syria, Yemen and Libya. They spend billions of dollars for US weapons, billions more for US investments.

According to the Saudi press agency, "(t)he death penalty was implemented...on a number of culprits for adopting extremist terrorist ideologies and forming terrorist cells to corrupt and disrupt security as well as spread chaos and provoke sectarian strife."

Public executions were carried out in Riyadh, Mecca, Madina, and elsewhere, most often by beheading. Since January, there were 100 or more executions in the kingdom, around 150 in 2018.

It's not a pretty picture, including the absence of judicial fairness in rubber-stamp Saudi courts, proceedings mocking fairness.

On January 2, 2016, one of the largest-scale mass executions occurred in recent memory - 47 in a single day for the crime of terrorism, including prominent Muslim cleric Nimr al-Nimr — mostly by beheadings, several by firing squad, done inside prisons instead of public squares, Riyadh's usual procedure.

The mass executions were the largest on a single day since 63 victims were put to death in 1980. Sheikh Nimr was brutally treated for criticizing repressive Saudi rule – harassed, beaten, shot, arrested, tortured, denied vitally needed medical treatment, then extrajudicially executed.

In October 2014, he was sentenced to death on spurious sedition charges, for "seeking foreign meddling in (Saudi affairs), disobeying its rulers, and taking up arms against the security forces," according to Riyadh.

He told supporters that Riyadh "depend(s) on bullets and killings and imprisonments. We must depend on the roar of the word, on the words of justice."

He rejected violence, relied on the "weapon of the word," predicted rebellion if authorities continued their ruthless oppression.

His trial was a travesty of justice – rubber-stamp guilt by accusation with no chance for a legitimate defense, execution assured by kingdom diktat.

Riyadh operates like ISIS, the terrorist group it supports. Both specialize in outrageous atrocities, notably beheadings and other high crimes.

Academic Madawi al-Rasheed writes extensively about Saudi Arabia. Men and women are now equal in the kingdom "when it comes to prison torture," she explained, adding:

"Many female activists have languished for months in jail, where they describe cruel treatment at the hands of Saudi authorities."

They face "vague (or) false charges," including "undermining Saudi internal security," acting as a foreign agent, treason, and other accusations.

Loujain al-Hathloul was imprisoned for campaigning to allow women to drive. When the ban was lifted last year, she "other activists were rounded up and jailed," al-Rasheed explained, adding:

"The shocking details of the horrific state violence inflicted on Hathloul attests to the dark side of a regime determined to silence dissent."

She was "beaten, waterboarded, given electric shocks and threatened with rape and murder" — countless other men, women and children brutalized the same way.

Carrying out multiple executions by beheadings or other ways during a 24-hour period is all in a day's work by the Saudis.

Ruling authorities are intolerant of criticism, activists for democratic rights and justice, dissidents, and nonconformists.

They're a family dictatorship, masquerading as a nation state. As long as they retain US support, they can do whatever they please with impunity.