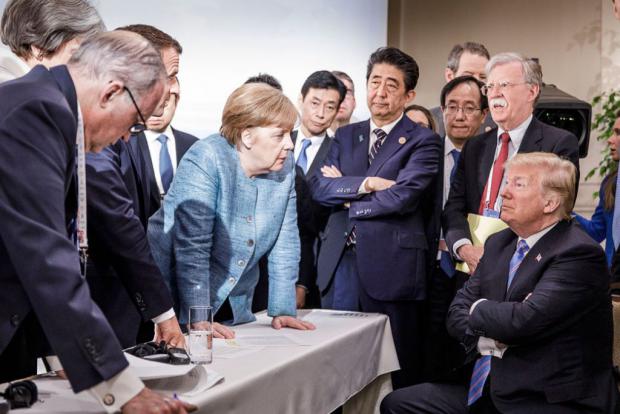 The NYT and Wall Street Journal addressed the same issue.

According to the Times, "Rogue nations (sic)" Trump vowed to "tame (sic)…are challenging him," referring to North Korea, Iran and Venezuela, omitting China and Russia.

There's nothing "rogue" about these nations. The designation applies to the US, its NATO partners, Israel, and other regional "rogue" states, waging endless wars on humanity, committing the highest of high crimes.

A common theme defines the above nations, as well as Russia, Syria, Cuba, and Nicaragua.  They're independent states, refusing to subordinate their sovereign rights to US imperial interests — nor should they or any other countries.

They support world peace and stability, mutual cooperation among all nations, and the right to remain free from control by any foreign power. International law backs them.

They oppose what the scourge of US imperialism is all about, a menace threatening humanity at home and abroad.

According to the Times, "North Korea, Iran and Venezuela… decided…they could take on" the Trump regime, adding:

They're "betting that (DJT) is neither as savvy a negotiator nor as ready to use military force as he claims. Each also poses a drastically different challenge…"

As usual, the Times has things backwards. These and other independent countries want normalized relations with the world community,. They pose no threats to their neighbors or other nations.

They're threatened by bipartisan hardliners in Washington, wanting their sovereign independence eliminated, in the case of Iran and Venezuela, their vast oil and gas resources handed to Big Oil for looting.

Heightened tensions are driven from Washington, not from their capitals. Phony claims of an Iranian threat are worrisome. Do Trump regime hardliners intend war on the Islamic Republic?

Its a concern I've addressed in recent and earlier articles, a lunatic scheme if things go this far. I consider it unlikely but possible because of the rage by Pompeo and Bolton to return the Islamic Republic to US client state status.

The same goes for Venezuela, both countries in the eye of the Trump regime's created storm, going all out for toppling their legitimate governments, so far short of military intervention.

As for North Korea, Pompeo and Bolton aim to subjugate the country as a US vassal state. Along with wanting it denuclearized, it's part of Washington's strategy to isolate China regionally, what hasn't worked so far and won't likely ahead.

The same goes for sticks over carrots tactics against all US adversaries. Its hostile agenda against sovereign independent states consistently fails. It does more to alienate allies than solidify relationships.

The Times repeated the Big Lie reportedly created by Mossad, alleging Iran and/or its Middle East partners were planning attacks on US regional forces.

The claim turns reality on its head. Pentagon troops, Israel, and their Middle East allies aren't threatened by Iran or any other countries.

Claims otherwise are Big Lies, reminiscent of mass deception in the run-up to US-led aggression on Iraq, Libya, Syria, and other countries earlier.

For centuries, Iran never attacked another nation. Throughout the Islamic Republic's history, it's been at peace with its neighbors, never threatening hostile US regional forces other than indicating it'll defend its sovereignty if attacked, its right of self-defense, affirmed by the UN Charter and other international law.

As for Venezuela, the Times is as flustered and frustrated as Trump regime hardliners for failing to topple Maduro and eliminate Bolivarian social democracy.

The coup plot failed. Efforts persist to try achieving what only military intervention might accomplish, by no means easily if the Trump regime recklessly goes this far against Venezuela and/or Iran.

The Journal did the Times one better, saying "Trump's 'America First' foreign policy (agenda) is being challenged on four fronts at once," adding China to the countries cited by the Times.

Neither broadsheet explained that US foreign policy is all about controlling other nations, their resources and population, what imperialism is all about, what sovereign independent states resist.

The Journal saying "no president has the luxury of choosing what crises may emerge on his watch" failed to explain the US manufactures its own at a time its only enemies are invented ones.

What the Journal called "upheaval" in Venezuela was all about the US wanting control over its vast oil reserves, along with aiming to eliminate the hemisphere's preeminent social democracy.

Establishment media suppress cold hard truths, pretending democratically elected and reelected President Maduro is "autocratic," a bald-faced Big Lie, along with virtually everything else reported about the country.

The Bolivarian Republic, Iran, North Korea, China, and all other sovereign independent states want US hands kept off their countries.

Rule of law principles support them, what the US repeatedly breaches, what the Times, Journal and other establishment media never explain — supporting what demands denunciation.