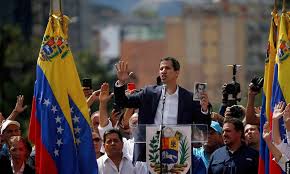 Since initiated in January by Trump regime hardliners, everything tried to topple President Maduro and eliminate Venezuelan social democracy failed.

Are nearly four months of utter failure enough to deter them? Not a chance! Their aim for regime change rages.

They're supported by US establishment media, backing their aim to gain another imperial trophy at the expense of the Venezuelan people, the rule of law, and regional peace — along with control over Venezuela's vast oil reserves, their same aim for Iran.

Differences between the US and Russia on these and other major issues were clear during Pompeo's talks with Vladimir Putin and Sergey Lavrov Tuesday in Sochi.

US designated puppet/usurper in waiting Guaido follows orders from Washington. He has no say over anything. His US handlers script his remarks and control his actions.

Reportedly, his subordinate puppet in Washington Carlos Vecchio will meet with USSOCOM commanders at the State Department next Monday, discussing possible military intervention in Venezuela.

If the US goes this far, it's the White House's call, not SOCOM, Guaido or his henchmen. The meeting is all about theater, not substance, but indicates unrelenting Trump regime hostility toward Venezuela, its failed regime change plot continuing.

SOCOM commander Admiral Craig Faller said he'll discuss how the Pentagon can help "restore constitutional order" in Venezuela (sic) — code language for wanting US control over the country replacing it.

Venezuelan Vice President Delcy Rodriguez reacted strongly to Guaido's call for US military intervention, acting on behalf of his handlers.

Calling it "repulsive (and) doomed to fail," she said Maduro "reject(s) (the request) for (US) for military intervention in Venezuela on behalf of a group of coup plotters who carry out terrorist activities to create confusion and destabilize our homeland."

Polls show the vast majority of Venezuelans want US hands kept off their country, especially by military intervention they strongly oppose. So does the world community, notably European and regional countries.

On Tuesday, Venezuela's Supreme Court announced charges against four more opposition lawmakers for treason and conspiracy against the sovereign state, calling for the National Constituent Assembly to strip them of immunity so they can be prosecuted.

Twelve others face similar charges, for involvement in the failed April 30 tempest in a teapot coup plot, foiled in hours after initiated.

Separately on Tuesday, Venezuelan soldiers and police sealed off parliament over an alleged bomb threat, according to media reports.

Are these organizations covert CIA assets? Are they bribed to support the imperial state, overlooking its highest of high crimes?

John Bolton "is headed for the exits, having flown too close to the sun on his regime change efforts for Iran, Venezuela and North Korea," citing an unnamed Trump regime official, adding:

Bolton and Pompeo are "fighting all the time," according to an unnamed former White House official now at the State Department.

In a Spectator USA piece, Bolton critic Douglas Macgregor called him "the problem" among Trump regime officials, pushing for war on Iran and Venezuela.

Sacking him, Pompeo, and Elliott Abrams would go a long way toward pulling back from more wars than already.

US Court Approves Sale Of Venezuela-Bound Gasoline From Seized Ship

Venezuela Has Gone Cashless (And That's Not All)