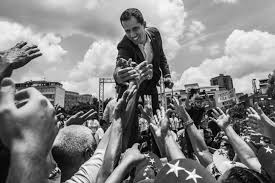 Trump Regime in Bed With the Devil to Topple Maduro

Its coup plot to topple President Maduro failed, achieving nothing but harshness inflicted on ordinary Venezuelans — showing contempt for people its hardliners claim to support.

In June, Trump regime hardliners opened a new front in their Latin American war on the sovereign rights of nations it wants forced into US client state status by  crushing their economies and immiserating its people — banning US tourist and educational travel to Cuba, an illegal hostile act like countless others.

The State Department lied claiming the action was taken for Havana's "interference in Venezuela (sic), and its direct role (sic) in the man-made crisis led by Nicolas Maduro (sic)" — ignoring the Trump regime's full responsibility for inflicting enormous harm on the Bolivarian Republic and its people.

US claims about Venezuela and Cuba destabilizing the Western hemisphere are bald-faced Big Lies — what US imperial rage is responsible for.

Governance in Cuba and Venezuela operate by higher standards, serving the rights and welfare of their people, seeking peace, equity, justice, and cooperative relations with other countries.

On the regional and world stage, Cuba's principle exports are doctors, other medical professionals, teachers, and good will.

Leading US exports are death, destruction, human misery, and fantasy democracy, the real thing abhorred at home and abroad.

Venezuela and Cuba work cooperatively to benefit both nations and their people — what  Trump regime hardliners are hellbent to eliminate.

They're working with fascist extremists in Venezuela to accomplish their aims, elements similar to Nazi-infested ultranationalist, xenophobic despotic elements the Obama regime used to eliminate democratic freedoms in Ukraine.

Controlling the likes of these figures isn't easy. According to a neocon/CIA-connected Washington Post "exclusive" report, a recording it obtained of comments made by Pompeo at a closed-door Conference of Presidents of Major American Jewish Organizations last week revealed his frustration over the Trump regime's failure to topple Maduro after months of trying.

"Our conundrum, which is to keep the opposition united, has proven devilishly difficult," Pompeo lamented, adding:

"The moment Maduro leaves (sic), everybody's going to raise their hands and (say) 'Take me, I'm the next president of Venezuela.' It would be 40-plus people who believe they're the rightful heir to Maduro."

Omitted from Pompeo's remarks was explaining that none of these unnamed hardliners are legitimate, none elected president by the Venezuelan people, most or all likely with little public name recognition, all backing exploitive fascist rule.

The vast majority of Venezuelans knew nothing about Guaido until he illegally self-declared himself interim Venezuelan president in January, following orders from Washington, including the script written for him to follow.

After months of WaPo press agent services for the coup plot, the broadsheet expressed frustration over failing to topple Maduro.

It noted that Pompeo's "remarks provide a rare window into the challenges the Trump (regime) faces as the momentum to oust (Venezuela's legitimate president) stalls, and some of the countries (pressured, bullied, and bribed into) back(ing) (imposter Guaido) explore alternative diplomatic paths to resolve the (made in the USA) crisis."

Rogue elements most everywhere are out for their own self-interest exclusively, operating extrajudicially for personal gain — in Venezuela, their eyes on the prize of the country's oil wealth and how they can profit hugely from it.

It's unclear how many countries still back the US coup plot to replace Bolivarian social democracy with US-controlled fascist tyranny, many perhaps having second thoughts about being on the wrong side of trying to topple a legitimate government enjoying popular support.

WaPo quoted an unnamed Guaido supporter, turning truth on its head saying he's "the most popular local figure in the country right now" — a bald-faced Big Lie about an overwhelmingly reviled nobody artificially elevated to prominence, awaiting his day of reckoning for treason and complicity with the Trump regime's sanctions war on the Venezuelan people.

As CIA director and Secretary of State, Pompeo has been hellbent to topple Maduro, the plot to replace him flagrantly breaching international law, opposed by most Venezuelans, wanting US dirty hands off their country.

As CIA director, Pompeo notoriously said "(w)e lied. We cheated. We stole. We had entire training courses" on how to do it.

As secretary of state, he operates the same way, a figure to be reviled, never trusted. The White House and vast majority of congressional members are no different.

The same goes for US departments and agencies, run by right-wing extremists — how all rogue states operate, none more ruthlessly dangerous than Washington.

Both extremist right wings of its war party operate the same way.