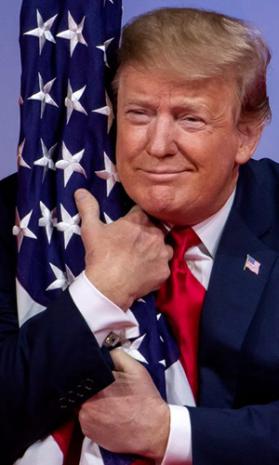 On Saturday, Trump said he's "all in" for a constitutional amendment, making it illegal to burn or otherwise desecrate the flag, calling it a "no brainer."

Flag burning, offensive language, and other actions deemed objectionable by some members of society are legal forms of free expression under the US Constitution's First Amendment.

In Matal v. Tam, the right-wing Roberts Supreme Court ruled against so-called "hate speech" laws that violate free expression — stressing the importance of "protect(ing) the freedom to express" views even when hateful or otherwise offensive.

In Palko v. Connecticut (1937), the Supreme Court called "(f)reedom of thought the matrix, the indispensable condition, of nearly every other form of freedom."

In Texas v. Johnson (1989), Justice William Brennan, writing for the majority, said "if there is a bedrock principle underlying the First Amendment, it is that government may not prohibit the expression of an idea simply because society finds the idea offensive or disagreeable."

According to the High Court ruling, the right to peaceful protests includes public flag-burning or other actions desecrating the flag — symbolizing what Mark Twain called "the eagle('s) talons," representing what its destructive imperial agenda is all about.

Dissent is the highest form of patriotism. Thomas Jefferson said  free speech and other fundamental rights "cannot be limited without being lost."

Former Supreme Court Justice Thurgood Marshall stressed "(a)bove all else, the First Amendment means that government has no power to restrict expression (regardless of its) ideas…subject matter (or) content."

"Our people are guaranteed the right to express any thought, free from government censorship," along with all other constitutional protections – eroding toward disappearing altogether.

In New York Times v. Sullivan (1964), Brennan said "…debate on public issues should be uninhibited, robust, and wide-open, and it may well include vehement, caustic, and sometimes unpleasantly sharp attacks on government and public officials."

"The argument against censorship is clear: no person should dictate our tastes, ideas, or beliefs. No official has the right to say what is trash or what has value."

Justice Louis Brandeis called called free speech and assembly fundamental to societies. No one on today's Supreme Court approaches the stature of these jurists.

Almost no one in Washington represents what governance of, by, and for everyone equitably is all about — just the opposite.

In November 2016, Trump said "(n)obody should be allowed to burn the American flag. If they do, there must be consequences — perhaps loss of citizenship or year in jail!"

No one, not even supporters, will confuse Trump with Jefferson, DJT a geopolitical know-nothing/serial lawbreaker surrounded by warmongering extremists.

An amendment banning flag burning is highly unlikely. It requires support from two-thirds of House and Senate members, then ratified by three-fourth of the 50 states.

The first 10 amendments constitute the Bill of Rights, the 27th originally proposed in 1789 ratified in 1992.