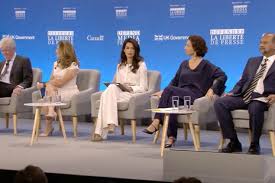 London Media Freedom Conference in a Nation Abhorring the Notion

On July 11 and 12, Britain and Canada co-hosted what was billed as a Global Conference for Media Freedom, adding:

It's "part of an international campaign to shine a global spotlight on media freedom and increase the cost to those who are attempting to restrict it" — notably the conference's co-hosts and their imperial partners.

Britain, Canada, the US, and other Western nations abhor speech, media, and academic freedoms, wanting them eliminated.

Their establishment media suppress what conflicts with the official narrative, providing propaganda services for their ruling authorities.

While the conference was ongoing, Britain indefensibly defended its right to electronically spy on its citizens and others before the Grand Chamber of the European Court of Human Rights (ECHR) — wanting control of the message, what totalitarian rule is all about.

The Bureau of Investigative Journalism and other organizations brought the case before the court, arguing that mass surveillance violates privacy, free expression, and media freedom rights.

RT and Sputnik representatives were barred from the conference for providing truth-telling news, information and analysis Western authorities want suppressed.

Justifying what's unjustifiable, a UK Foreign Office statement falsely said "(w)e have not accredited RT or Sputnik because of their active role in spreading disinformation" — a bald-faced Big Lie, how Western media operate, serving as press agents for powerful interests.

Outgoing UK Prime Minister Theresa May outspokenly opposes online freedom. She and other Tory hardliners earlier called for regulating its content, a regime thought control scheme, allowing what it considers acceptable, prohibiting what it wants suppressed.

May's 2017 Tory Manifesto called for Britain to become "the global leader in the regulation of the use of personal data and the Internet," adding:

"Some people say that it is not for government to regulate when it comes to technology and the internet. We disagree."

Britain's Investigatory Powers Act requires Internet companies to maintain records of customers' browsing histories, along with ministerial power to breach online privacy, including encrypted content – on the phony pretext of assuring no "safe space for terrorists to be able to communicate online."

They exist because the US, Britain, other Western nations, Israel, and their imperial partners support them.

May and other UK hardliners want government empowered as an online content gatekeeper, the way all police states operate.

The US, Britain, and their imperial allies want speech, media, and academic freedoms stifled, using the ruse of global terrorism they support as a phony pretext to suppress criticism of their agendas.

Their ruling authorities want ISPs cooperating to help advance their agenda. With police state laws already enacted by these countries, they're pushing the envelope further toward greater suppression of free expression and other fundamental rights.

US mistreatment of Chelsea Manning, other heroic whistleblowers, and Julian Assange for truth-telling journalism is all about wanting unchallenged control of the message, divergent information and views eliminated.

While rhetorically championing media freedom, Britain actively supports stifling it — in cahoots with the US doing the same thing.

The forcible arrest and imprisonment of Assange, holding him for extradition to the US at its request (unless judicially overruled) is one of numerous examples of UK contempt for speech, media, and academic freedoms — while piously expressing support.

Its glaring hypocrisy needs no elaboration.