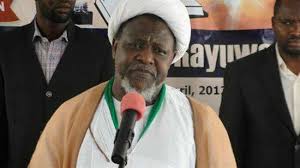 His February re-electoral triumph was dubious at best, critics citing voter-suppression and vote-buying.

Political violence occurred in the run-up to the election and its aftermath, soldiers and police responsible for human and civil rights abuses.

According to human rights activist Anietie Ewang, Buhari's earlier tenure was marked by "political violence, as well as lack of accountability for rights abuses."

His brutality includes arbitrary arrests and imprisonments for political reasons, notably targeting human rights activists, academics, students, independent journalists, and clerics like Zakzaky opposed to his despotic rule. More on him below.

Oil-rich Nigeria has the world's 10th largest reserves, second only to Libya among African nations.

He's been brutally mistreated by Nigerian regimes since the 1980s. In December 2015, soldiers stormed his home, seriously injured him, arrested and imprisoned him and his wife, while killing hundreds of his followers.

His IMN called it a massacre. Zakzaky and his wife remain imprisoned under deplorable conditions — despite ordered release by Nigeria's High Court in December 2016.

His severe mistreatment violates international law and Nigeria's Constitution, upholding the right to freedom for the country's people.

Throughout most of his illegal detention, Zakzaky and his wife have been denied proper medical treatment, despite their failing health.

Earlier this year, he suffered a debilitating stroke. Releasing him for vital medical care is essential to save him, his condition steadily deteriorating.

Weeks earlier for the first since his December 2015 imprisonment, foreign doctors were allowed to examine him.

The diagnosed him with severe lead and cadmium poisoning, left ventricular hypertrophy, malignant hypertension, spondylitis, anophthalmia in one eye, open-angle glaucoma in the other, PTSD from protracted trauma, and other debilitating effects of stroke.

For each of these conditions, Zakzaky requires hospitalization and expert medical care. His wife Zeenah suffers from severe osteoarthritis.

She's wheelchair bound for transport, no longer ambulatory. She also suffers from hypertension, hyperthyroidism, gastrointestinal ailments, and other health issues.

They're slowly perishing painfully and will die if not released and able to get proper medical care.

Days earlier, Zakzaky reportedly  suffered a second stroke. The deplorable mistreatment he and his wife are enduring amount to slow torture.

The repressive Buhari regime hasn't yielded to Nigeria's High Court release order, nor calls by the country's parliamentarians, and human right activists domestically and abroad, urging the release of Zakzaky and his wife.

Their imprisonment is unconstitutional and unlawful under international law. Given their precarious state, they could perish in days or weeks if remain behind bars.

I was requested to add my name and did, supporting the release of Zakzaky and his wife for the urgent medical care they need.

The petition said the following:

We write to demand that Sheikh Zakzaky and his wife Mallima Zeenah be allowed to leave the country for urgent medical treatment.

In the last few days, Sheikh Zakzaky's health has further deteriorated. Last month doctors examining the leader of the Islamic Movement of Nigeria have renewed pleas for him to be released in order to access medical treatment after finding high levels of lead toxicity in his body.

The continued detention of both of these figures as well as hundreds of others has been a huge stain on the reputation of Nigerian government.

The health of Sheikh Zakzaky and Mallima Zeenah health continues to severely deteriorate as a result of injuries THAT APPEAR TO BE inflicted by THE Nigerian authorities.

By not allowing them to get the medical treatment they need, the Nigerian President is adding further evidence of his government's inhumanity and cruelty.

As you know the Nigerian people struggle peacefully to attain their own sovereignty for years and are expecting the organizations linked to Human Rights to help them.

During these years they have been permanently oppressed as they were and still are demanding to have access to their basic citizenship rights.

As the UN has been mainly established to provide peace and security across the globe and according to the article 21 of Universal Declaration of Human Rights (UDHR), which recognizes the people's will as the basis and source of governing power, the demand of Nigerian citizens on having a democratically elected government in which the majority rules the country is a very elementary request.

Why this primary demand for achieving the minimum social rights should face the government's atrocities including imprisonment, torture, and assassination?

According to the UDHR's articles 1, 2, 3, 5, 6, 7, 8, 9, 10, 11, 12, 13, 17, 18, 19, 20, 21, 22, 25, 29, the behavior of this autocratic regime toward his own people including; destruction of the hussainiyas and the mosques, preventing the Nigerian people who are mostly Muslims from establishing both Friday and congregational prayers, suspension of citizenship and deportation of opponents of Nigerian undemocratic and totalitarian government, is considered as a crime and UN is responsible to condemn those acts which violate international laws.

You know well that these mentioned crimes don't match with the essence of Human Rights.

The silence of world powers and the so-called defenders of Human Rights toward these anti-human crimes, is not surprising as the authorities of Nigerian tyrannical regime are acting under their support and they are allowed once the West's interests are achieved!

But as the one who should unveil the criminals and has to intervene and to protest against the oppressors, your silence is significant and shocking.

Remember that you're responsible for maintaining a peaceful and secure world and as the person in charge of performing the UDHR content, you're condemned in the presence of free consciences and human history.

According to the religious teachings and the unchangeable divine traditions; whatever you, other international officials and those so-called defenders of Human Rights, accomplish your legal, human and moral duty or not, the oppressed nations particularly the Yemeni, Syrian, Palestinian, Iraqi, Afghan and Nigerian peoples will win as they have decided to be free and not to accept any type of injustice and they stand on this issue.

But that is a historical privilege for you to be honored by supporting them, thus we undersigned, ask your Excellency to carry out the following issues as soon as possible:

1. Launching urgent measures in order to stop the actions which oppose the international standards and violate the UDHR's article 25 regarding the sensitive health situation of his eminence Sheikh Zakzaky;

2. Providing necessary and ensuring arrangements to establish the democracy and to implement the UDHR's article 21 by making possible a referendum through which every single Nigerian citizen has one vote;

3. Initiating emergency measures to stop the tyranny of Nigerian dictatorial regime which threatens the security and freedom of people and jail, torture and assassinate them;