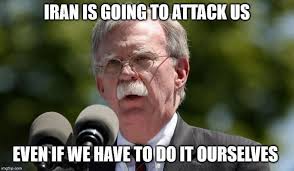 Iran Provoking the US and Britain?

Truth-telling isn't a Western attribute by its authorities, just the opposite, turning it on its head to serve their interests — an agenda hostile to world peace, equity and justice.

Instead, it turned truth on its head about Iran's lawful interdiction of a UK-flagged vessel, getting its facts wrong in the following statement, saying:

"We condemn the seizure of two commercial ships in the Strait of Hormuz (sic). This represents a clear challenge to international freedom of navigation (sic)."

"We urge Iran to immediately release the ships (sic) and their crew. The UK has made clear that their priority is to address the situation through dialogue and diplomacy (sic).

Fact: Iran legally acted against one UK vessel, the Stena Impero, not two, the second one briefly stopped before heading to its destination.

Fact: Britain's detained tanker breached UNCLOS' Article 19 by turning off its transponder, endangering seaborne traffic, along with willfully and provocatively violating the right of "innocent passage."

The incident was a US-orchestrated action of malign intent against Iran and other Persian Gulf seaborne traffic. See below.

Fact: Hostile actions by US and UK regimes represent "a clear challenge to international freedom of navigation" and a whole lot more.

Fact: The US, UK, along with other key NATO nations, Israel, the Saudis, and other despotic regional regimes represent an unparalleled axis of pure evil.

Fact: Just societies demand that Britain immediately release Iran's Grace 1 tanker and pay compensation for any damage to the vessel or harm to its crew.

Fact: Britain's seizure of Iran's vessel was made in the USA, Trump regime hardliners ordering its authorities to breach maritime law against Tehran with malign intent. More on this below.

Fact: The US and UK appendage to its imperial agenda deplore "dialogue and diplomacy" the way it should be — why engaging with their authorities this way is a waste of time, force the only language they understand.

Fact: NATO is an appendage of US foreign policy, a mass slaughter and destruction machine, prioritizing aggression against sovereign independent states after Soviet Russia's December 1991 dissolution.

Fact: Destabilization globally is how the US and its imperial partners operate, not nonbelligerent Iran.

Fact: NATO secretary general Stoltenberg is a US-installed puppet serving its interests. The same goes for most of his predecessors.

The principle "is well-known in international law which is used against the foul measures of a government."

Their actions were and remain in cahoots with their hardline Trump regime counterparts, showing beyond a shadow of a doubt that Britain is as hostile toward Iran as the US.

Both nations want the JCPOA eliminated as a pretext for escalating hostile actions against the Islamic Republic. Britain pretends otherwise.

Via Twitter, Baeidinejad added: Anti-Iran officials in London "want to escalate existing tension between (Tehran's ruling authorities) and the UK well beyond the issue of ships."

"This is quite dangerous and unwise at a sensitive time in the region." The Islamic Republic is "firm and ready for different scenarios."

Just societies shudder at the prospect. Theresa May disgraced the office of prime minister. Johnson's ascension to the post may have Brits yearning for her return.

The broadsheet supports illegal Trump regime "maximum pressure" war on the country by other means, supported by Britain, France, Germany, and the EU.

He "cares little who gets hurt." He was "directly involved in" Britain's illegal July 4 seizure of Iran's Grace 1 supertanker.

Iran retaliated legally by seizing the UK-flagged Stena Impero. According to Tisdall, "Britain has been plunged into the middle of an international crisis it is ill-prepared to deal with" because of Bolton's manipulation.

"The Grace 1, which flies a Panamanian flag, had been under surveillance by US satellites since April, when it was anchored off Iran," adding:

"The supertanker, full to the brim with crude oil, was too big for the Suez Canal, and so it sailed around the Cape of Good Hope before heading for the Mediterranean."

Despite no evidence of its destination, "US intelligence services (claimed) it was headed for the Syrian oil refinery of Banias."

"Washington advised Madrid of the arrival of the supertanker 48 hours ahead of time, and the Spanish navy followed its passage through the Strait of Gibraltar."

Spain took no action. Bolton got Britain to seize the vessel. "Iran's retaliation in snatching the Stena Impero has further exposed Britain's diplomatic isolation and its military and economic vulnerability," said Tisdall, adding:

Britain was manipulated "to blindly (dance) to the beat of Bolton's war drums."

Geopolitical know-nothing Trump is manipulated the same way. Will he attack Iran preemptively, risking potentially devastating regional consequences if he goes this far?

At a time when the US badly needs a statesman leader, it's got an intellectual pigmy  businessman focusing on profit-making/reality TV president instead — mocking and disgracing the office he holds.