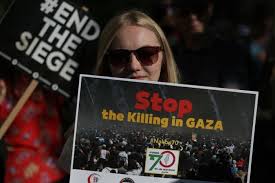 Systematically denied their fundamental rights, the world community supports Israel, ignoring its high crimes of war and against humanity — Gazans under suffocating blockade suffering most of all.

From pre-school to higher education, Israeli students are taught to hate Arabs.

State-sponsored brainwashing begins at a very young impressionable age, why most Israelis believe the disinformation and Big Lies taught them — compounded by indoctrinating children to be warriors on the phony pretext of hostile enemies surrounding the Jewish state.

Its only enemies are invented. No real ones exist. Soldiers in schools and classrooms reinforce a warrior ethic.

War is considered natural, military service considered a right of passage, Arabs viewed as enemies of the state, treating them violently OK.

Notions of victimization, a siege mentality, uncompromising patriotism, belligerence, self-righteousness, dehumanization of  Palestinians, and insensitivity to their suffering is drummed into the public mind before able to know right from wrong.

Jews from young children to the elderly are exposed to mind-manipulation daily — at home, in school, at work, in public places, during religious activities, in symbols and imagery, as well as through state-sponsored propaganda.

A dum dum bullet was used, a terror weapon, exploding into dozens of shrapnel pieces in his brain.

According to international humanitarian law, "(t)he anti-personnel use of bullets which explode within the human body is prohibited."

The ICRC explained that "the UN Secretary-General's bulletin on observance by United Nations forces of international humanitarian law, which is not limited to international armed conflicts, prohibits the use of bullets which explode in the human body," adding:

"The effect of bullets which explode within the human body are much worse than that of expanding bullets, which are also prohibited."

They're an Israeli munition of choice against defenseless Palestinians. The Jewish state does what it pleases because who'll challenge its barbarity.

Miraculously Shteiwi survived but may be brain dead. In intensive care, he was placed in an induced coma, one or more family members with him constantly, hoping for a miracle revival.

B'Tselem condemned what happened, calling him "the latest victim of the reckless open-fire policy that allows soldiers to use live fire (against defenseless Palestinians) even when neither they nor anyone else is in any danger."

Brainwashed to hate Arabs, they're trigger-happy on patrol. B'Tselem explained what preceded the cold-blooded shooting of Shteiwi, saying:

Residents of Kafr Qaddum, an occupied West Bank village, protest weekly on Fridays against closure of the main access road to Nablus, "forc(ing) (them) to use a bypass road that lengthens the journey by about half an hour."

Despite posing no threat to Israeli soldiers or settlers, they face tear gas, rubber-coated steel bullets and live fire.

Around 100 meters from the protest, a village resident "was sitting under an olive tree with his two 10-year-old children."

"(A)bout 10 meters away…Shteiwi…was…playing with a piece of wood," threatening no one.

In early afternoon when demonstrators began dispersing, "a soldier fired a live bullet. It hit the boy's head, and he immediately fell to the ground."

An ambulance on the scene took him "unconscious to Rafidia Hospital in Nablus (where he) underwent head surgery."

"Two days later…sedated and ventilated, he was transferred to the intensive care unit at Sheba Hospital in Tel Hashomer."

It "rejected any responsibility for the incident," said B'Tselem, adding: "A response the military released claimed that the soldiers had used 'various crowd-control methods' and that 'a report was received of an injured boy aged around ten.' "

"…Shteiwi's injury is a direct result of the open-fire policy implemented by the military in the Occupied Territories."

"This policy illegally and without any justification permits the use of live fire against Palestinians who are not endangering anyone."

"The policy remains in force despite (its responsibility for) hundreds of Palestinian deaths and thousands of injuries."

The IDF falsely claims that soldiers violating laws and/or regulations will face appropriate punishment, what's hollow and meaningless in reality.

Palestinian lives, rights and welfare don't matter. They're vulnerable at all times for what ever harshness Israel inflicts on them.

Israeli law-enforcement is "a whitewashing system intended to create the illusion of investigations" and justice, B'Tselem explained.

Friday Kafr Qadum village demonstrations are peaceful. An IDF spokeswoman falsely accused dozens of its residents with taking part in a "riot."

Israel confronts nonviolent Palestinian protesters with a shoot to kill or maim policy, including young children, paramedics, and truth-telling journalists.

Barbarism is official Israeli policy toward Palestinians and other Jewish state adversaries, what the scourge of Zionism is all about.

It's tyranny by another name – extremist, undemocratic, hateful, ruthless, racist, destructive, and hostile to peace, equity and justice.

It's contemptuous of fundamental legal, moral and ethical principles – a cancer infesting Israel, America, other Western societies and elsewhere.