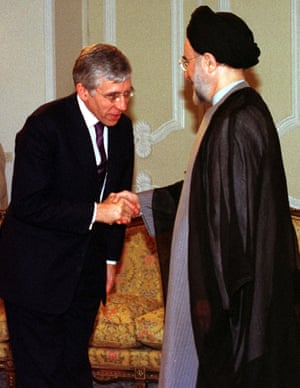 The same goes for their US counterparts Straw didn't address in his opinion piece. More on this below.

The bandit act was an example of how now-former UK envoy to Washington Kim Darroch described Trump regime actions on the world stage — calling them "diplomatic vandalism."

It's that and a whole lot more by GOP and Dem commanders-in-chief of the US war party and their accomplices — waging perpetual wars against nonbelligerent states threatening no one, abhorring peace and stability.

John Bolton likely represents this extremism more than any other high-level US official in memory. Straw called him "off the wall" when it comes to Iran.

He never met a sovereign independent country he didn't want to bomb. He earlier called for military action on Iran and North Korea.

"The inescapable conclusion is that Iran will not negotiate away its nuclear program. Nor will sanctions block its building a broad and deep weapons infrastructure."

"The inconvenient truth is that only military action like Israel's 1981 attack on Saddam Hussein's Osirak reactor in Iraq or its 2007 destruction of a Syrian reactor, designed and built by North Korea, can accomplish what is required."

In an earlier article on the psychopathology of Trump's geopolitical team, I stressed that he surrounded himself with monsters — headed by Bolton and Pompeo, a recklessly dangerous duo.

They exhibit "dissocial personality disorder," including "coldheartedness," a "callous unconcern for the feelings of others," a lack of remorse, shame or guilt, irresponsibility, an extremely high threshold for disgust, impulsiveness, emotional shallowness, "pathological lying," a "grandiose sense of self-worth," an incapacity for love, a "parasitic lifestyle," among other abnormalities.

Their minds don't work like normal people. They "con others for personal profit…pleasure," and power over others they seek to dominate.

The Trump regime geopolitical team is run by a gang of recklessly dangerous psychopaths — threatening nations, their authorities, and people everywhere.

Judge them by their extremist rhetoric and actions on Iran, Venezuela, Russia, China, North Korea, and other nations — longstanding US policy calls for transforming into vassal states.

Preemptive wars are the favored strategy of America's military, industrial, security, media complex, its members abhorring peace, stability, and the rule of law.

In his Sunday opinion piece, Straw said on an October 2015 holiday visit to Iran with his wife and friends, they were met by IGRC members.

They presented Straw with a two-page petition, saying:

" 'Although it is in our tradition as Iranians to welcome guests, this 'welcome' gesture does not apply to you!' it began."

" 'The people of Iran do not have good memories about you and the British regime…'You know better than us about the crimes and the ample plots that were orchestrated by your country against the people of this land.' "

"The document then set out in detail all the terrible things Britain had done to Iran, going back to the 1857 Treaty of Paris and the Anglo-Persian war," Straw added.

Because he and his entourage were unwelcome, they cut short their visit "four days early." Hostile to Iran current and former UK officials are persona non grata in the Islamic Republic for good reason. The same goes for their US counterparts.

Commenting on the ongoing Persian Gulf crisis, Straw said "it is crucial to understand" longstanding UK actions against Iran to know what's behind its actions toward the country.

"They have good cause to be resentful against the 'cunning, colonial fox,' as they describe us. Iran never was a British colony but that didn't stop us exploiting the country for treasure and power."

"We bribed and cajoled Iran to do our will throughout the 19th Century and early part of the 20th Century and, if that didn't work, we landed troops."

"We invaded Iran in the First World War, helping cause a catastrophic famine in the process. In the Second World War, with the Russians, we jointly occupied the country for five years from 1941-6."

Britain was complicit with the CIA's first ever coup — in 1953, ousting democratically elected Mohammad Mossadegh, a fascist dictatorial regime replacing him until Iran's 1979 revolution restored its sovereign independence.

Straw reinvented the disastrous 1980s war between Iraq and Iran, Jimmy Carter's proxy war, he failed to explain, supporting Saddam Hussein to smash Iran, along with wanting both countries to smash each other.

Hundreds of thousands of combatants and civilians perished on both sides — from September 1980 - August 1988, a UN-brokered ceasefire ending the carnage.

US/UK hostility toward both countries persisted. The rest, as they say, is history, Iraq especially devastated by endless US direct and proxy wars for nearly 40 years, including over a dozen years of genocidal sanctions.

Millions of Iraqis perished. Their suffering continues because of US, UK, NATO policies.

US sanctions war on Iran since its 1979 revolution harmed the nation and its people, especially all-out Trump regime actions to make the Islamic Republic's economy scream and immiserate its people.

Bolton and Pompeo falsely believe that all-out sanctions war will make its ruling authorities "come begging for a deal," as Straw put — showing their ignorance of Iranian resolve.

Straw admitted it, saying their "approach won't work. It is based upon a complete misunderstanding of the Iranian psyche," including the nation's people, Straw calling them "unified" against hostile America and Britain, adding:

"After two centuries of humiliation, what Iran seeks above all is respect and recognition."

Their ruling authorities and people want no foreign interference in their internal affairs, what international law mandates. They want regional peace and mutual cooperation with other nations.

"(I)f Iran is shown that respect, a deal is possible," said Straw. "Without that, the cat and mouse game in the Gulf and continued instability in the wider Middle East will continue."

According to Mehr News, "(a) senior official at the Iranian Intelligence Ministry has given details about another heavy blow that Iranian intelligence forces have inflicted on the US by busting and charging 17 spies affiliated to the country's (CIA) spy agency."

They're charged with "capital crimes" against the nation…threaten(ing) (its) social and political well-being."

"The news follows Tehran's announcement on June 17 that the country had dismantled a CIA-run 'large US cyber-espionage' network," Mehr News reported.