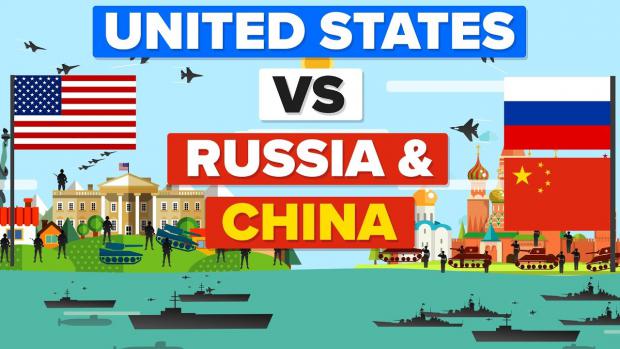 NYT editors addressed the issue, falsely calling both countries "adversaries." Indeed they're "growing closer," both nations portrayed as strategic threats to US rage for global dominance.

The Times: "(S)ince Western nations imposed sanctions on Russia after it invaded Ukraine in 2014 (sic), Chinese and Russian authorities have increasingly found common cause, disparaging Western-style democracy (sic) and offering themselves as alternatives to America's postwar leadership."

"Now China and Russia are growing even closer, suggesting a more permanent arrangement that could pose a complex challenge to the United States."

Fact: No Russian Federation invasion of Ukraine or any other country occurred — a US/NATO specialty, not how the Kremlin operates.

Fact: The US poses an imperial threat to Russia, China, and other countries, not the other way around.

China's Xi Jinping earlier called Sino/Russia ties stronger than ever, the "best in history," both nations "each other's most trustworthy strategic partners," adding:

Leaders of both nations regard each other as key strategic allies — a vital counterforce to endless US aggression, threatening world peace, stability, and security.

The 2,500 mile Power of Siberian pipeline, linking Russia's Far East to China to be completed this year will supply around 38 billion cubic meters of Russian natural gas to China annually for 30 years, according to agreed on terms between Gazprom and the China National Petroleum Corporation.

Construction of the Power to Siberia-2 pipeline will deliver another 30 billion cubic meters of Russian natural gas to China via a Western route – both projects and other major ones of huge importance to both countries.

Putin and Xi have met face-to-face around two dozen times — testimony to their longterm strategic partnership and friendship.

China is an economic powerhouse, Russia the world's dominant military power, its super-weapons exceeding the best in the West.

Russia is rich in what China needs most — oil and gas, technological expertise, industrial equipment, and state-of-the-art weapons.

Sharing a common border, both countries want them for defense, not offense like the US, NATO and Israel operate.

It promotes and facilitates cooperation in technology-intensive industrial, financial, commercial, and military areas.

Both nations are increasingly trading in their own currencies, bypassing dollar transactions. Global de-dollarization is an idea whose time has come.

Ending dollar dominance would be the political, economic, financial, military equivalent of cutting the biblical Sampson's hair, eliminating his strength.

According to the DOD/Pentagon white paper, the US and its allies aren't acting effectively enough to counter Sino/Russian aims — falsely accusing both countries of using "gray zone" tactics to foment instability.

It's how US-dominated NATO, Israel, and their imperial partners operate, not Russia and China.

They're growing world powers, the US a nation in decline politically, economically and militarily — despite spending countless trillions of dollars to maintain global supremacy.

The myth of American exceptionalism, the indispensable state, an illusory moral superiority, and military supremacy persist despite hard evidence debunking these notions.

The US has been declining for decades. The late Gabriel Kolko believes it began during US aggression against North Korea, continued during a decade of Southeast Asia war, and accelerated post-9/11.

It's the same dynamic that doomed all other empire in history. The US is declining  because of its imperial arrogance, hubris, endless wars against invented enemies, and unwillingness to change.

The US ruling class serves privileged interests exclusively at the expense of peace, equity and justice.

Its power and influence are waning on the global stage while Russia and China are rising — especially united for common longterm constructive aims.

People are panic buying homes as prices skyrocket around the world