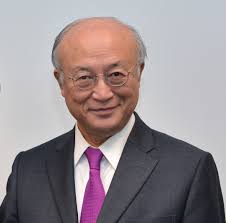 On Monday, an IAEA statement said the following: "The secretariat of the International Atomic Energy Agency regrets to inform with deepest sadness of the passing away of Director General Yukiya Amano."

On July 18, he died at age-72 after heading the organization since 2009, no cause of death explained. Was it natural or otherwise? More on this below.

It's believed Amano intended to step down before his third term expired in November 2021.

Reportedly he had health issues from an unspecified illness. Last September, the IAEA said he'd undergone an unexplained medical procedure, no further elaboration given about his health status.

His death came at a time of heightened tensions between Iran and the West because of Trump regime-led hostility toward the country.

During his tenure, he oversaw the landmark JCPOA nuclear deal's adoption by its signatories and Security Council members, making it binding international law.

"My deep condolences…We worked very closely" during JCPOA negotiations. "I commend his skillful and professional performance (that) resulted in complete closure. May the Almighty bless his soul."

Vladimir Putin said he "always admired his wisdom and foresight - his ability to make informed decisions in the most difficult circumstances."

It's unclear who'll succeed him. Deputy director general Mary Alice Hayward is serving as acting IAEA chief in the interim.

No nation is more intensively monitored, none more scrupulously in compliance with Nuclear Non-Proliferation Treaty (NPT) provisions and its other nuclear obligations.

"The agency sends inspectors to sites and locations only when needed. The agency uses all safeguards relevant to information available to it but it does not take (so-called intelligence) at face value."

Without mentioning Israel or Netanyahu by name, Amano added that "(a)ll information obtained, including from third parties, is subject to rigorous review and assessed together with other available information to arrive at an independent assessment based on the agency's own expertise."

"In order to maintain credibility, the agency's independence in relation to the implementation of verification activities is of paramount importance."

"Since 16 January 2016 (JCPOA Implementation Day), the Agency has verified and monitored Iran's implementation of its nuclear-related commitments in accordance with the modalities set out in the JCPOA, consistent with the Agency's standard safeguards practices, and in an impartial and objective manner."

"The Agency reports the following for the period since the issuance of the Director General's previous quarterly report."

"Iran has continued to permit the Agency to use on-line enrichment monitors and electronic seals which communicate their status within nuclear sites to Agency inspectors, and to facilitate the automated collection of Agency measurement recordings registered by installed measurement devices."

The report, others preceding and following it, found Iran in full compliance with its JCPOA obligations, stating:

"Iran is implementing its nuclear-related commitments under the Joint Comprehensive Plan of Action."

That status has not changed to this day. The Arms Control Association affirmed Iran's compliance with Nuclear Non-Proliferation Treaty (NPT) and JCPOA provisions.

Based on Iran's fulfillment of its NPT and JCPOA obligations, no justification exists for imposing nuclear related sanctions on the country — by the Security Council, the only body authorized to impose them, not individual nations on their own.

The Security Council is empowered to decide what actions may be used to enforce international law — including "complete or partial interruption of economic relations and severance of diplomatic relations," other than use of military force.

When Article 41 steps don't work, Article 42 authorizes Security Council members to "take such action by air, sea, or land forces as may be necessary to maintain or restore international peace and security" — by use of "demonstrations, blockade," or military intervention.

The Security Council alone may authorize going this far — not presidents, prime ministers, lawmakers, or judicial bodies of member states.

"Informed sources have speculated that late chief of the International Atomic Energy Agency (IAEA) Yukiya Amano was assassinated by Israel in collaboration with the US for refusing to give in to pressures to raise new fabricated allegations against Iran's nuclear program," adding:

"Informed sources told Tasnim that Amano is thought to have been 'eliminated' by the Israeli regime so that the UN nuclear agency could have a new chief."

He "was reportedly standing against the US and Israeli 'heavy pressures to open a false case against Iran on the nuclear issue,' the sources said."

"There is evidence that the (US and Israel) were constantly pressuring Amano to accuse Iran of violation of the 2015 nuclear deal…contrary to all technical and legal reports by the IAEA that confirmed Iran's compliance with the JCPOA, as a leverage for implementing Donald Trump's 'pressure-talks' scheme, they said."

"The sources also said that the US and Israel had kept the news of death of Amano in the dark for a couple of days after his funeral."

The CIA and Israel's Mossad have long disturbing histories of assassinating individuals for political reasons.

In his book titled "Inside the Company: CIA Diary," former agency case officer, the late Philip Agee exposed Langley dirty linen he was aware of.

Interviewed after the book's publication, he said: "Millions of people all over the world had been killed or at least had their lives destroyed by the CIA…I couldn't just sit by and do nothing."

Former CIA Cairo station chief Miles Copeland said the book is "as complete an account of spy work as is likely to be published anywhere," adding:

It's "an authentic account of how an ordinary American or British 'case officer' operates…All of it…is presented with deadly accuracy."

He denounced its "Phoenix operation during the Vietnam War, when the agency ran a paramilitary campaign of interrogation, torture, and assassination that targeted many innocent victims."

The late William Blum said he "believe(d) that Hugo Chavez was murdered by the United States," CIA operatives likely involved.

In an earlier article I titled Mossad Assassins at Work, I discussed its covert assassination program, operating like a global Mafia hit squad, I said — on the phony pretext of defending national security.

Former IDF chief of staff General Dan Haluts once said "(t)argeted killing is the most important method in the fight against 'terrorism,' " – meaning anyone considered an enemy of the state, international and Israeli law ignored.

Credible information on (his) death surfaced years ago. It wasn't natural. Evidence suggests he was assassinated. Israel most likely was responsible.

He likely died from polonium poisoning. He was in good health until suddenly and mysteriously falling ill on October 12, 2004." Weeks later he was dead.

Polonium traces were found on his clothes, kaffiyeh and toothbrush. On examination, his body showed traces of the poison.

He fell out of favor for non-compliance with Israeli authorities, eliminated and replaced with longtime Jewish state collaborator Mahmoud Abbas.

US and Israeli officials wanted him eliminated and replaced. He went from enemy to ally back to enemy, Mossad likely responsible for his death.

Was IAEA chief Amano targeted for elimination by the CIA and/or the Israeli spy agency?

Was his illness prior to death natural or induced? Will an autopsy be conducted to determine what took him?

If he was assassinated by the CIA, Mossad, or jointly, US and Israeli pressure no doubt will want his cause of death suppressed.

His family should get to the bottom of it and make the information public.