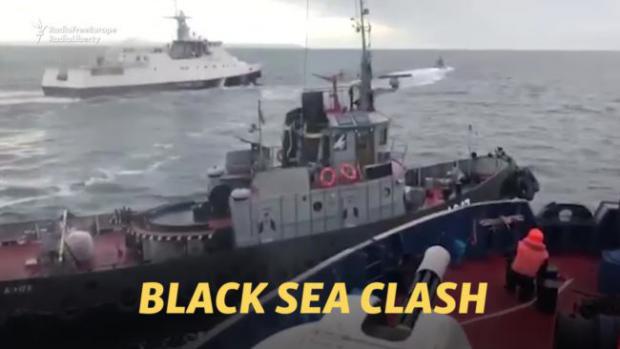 Ukraine is a US vassal state. Vladimir Zelensky's April election, taking office on May 20 as president changed nothing.

Serving at the discretion of his US master, his choice is obeying or ducking for cover. The fate of deposed President Viktor Yanukovych showed the price for disobedience.

The SBU "and Military Prosecutor's Office have detained Russia's Neyma tanker that blocked the movement of Ukrainian ships in the Kerch Strait," adding:

"A pre-trial investigation made it clear that Russian FSB border guards had carried out an act of armed aggression against Ukraine's Nikopol and Berdyansk warships and the Yany Kapu tugboat in the Kerch Strait at the direct order of senior FSB officials."

On November 25, 2018, here's what happened, according to Russia's Federal Security Service (FSB):

"They did not respond to legitimate demands by the ships and boats of Russia's FSB Border Guard Service escorting them to stop immediately and performed dangerous maneuvers."

"(W)eapons were used to force the Ukrainian warships to stop." The ships and their crew members were seized and detained. "Three wounded military servicemen of the Ukrainian armed forces received medical assistance."

"Before making such dangerous and irresponsible decisions, the Kiev (regime) should have thought about possible consequences of its actions."

The Kremlin initiated a criminal investigation into the incident. It revealed "irrefutable evidence of the staged provocation."

The US installed Poroshenko regime followed innocent passage procedure before, not last November, committing an unacceptable provocation — either OK'd by the White House or following its orders.

Kiev's action violated Articles 19 and 21 of the UN Convention on the Law of the Sea (UNCLOS) by entering Russian territorial waters without permission, along with failure to respond as required to legal Russian demands, and conducting dangerous maneuvers.

Under a 2003 treaty, Russia and Ukraine have freedom of navigation rights in the Kerch Strait – providing defined rules are followed through the narrow waterway.

Requesting and receiving permission to sail through the Strait is required. Kiev acted extrajudicially, according to Moscow.

The Kerch Strait separates the Crimean Republic from the Russian mainland. Russian Federal Security Service forces are responsible for maintaining order along the country's land and maritime borders.

No evidence suggests Moscow obstructs or otherwise interferes with foreign vessels sailing through the Kerch Strait into or from the Sea of Azov  – provided UNCLOS provisions and bilateral Russia/Ukraine navigation requirements are observed.

Two dozen Ukrainian seamen were taken into custody where they remain for provocatively breaching maritime law.

Kiev illegally seized the Russian vessel. On Thursday, Tass reported that detained crew member "are returning home but the vessel will remain in Ukraine," citing a Russian embassy in Ukraine spokesperson.

Tass also explained that Ukraine's SBU "detained Russia's Nika Spirit tanker at the port of Izmail, claiming that it was the Neyma tanker that had blocked the movement of Ukrainian ships during the Kerch Strait incident of last November."

RT said Ukraine's SBU "searched the (Russian) vessel, seized her logs and communications records, as well as interviewed the crew."

Russia's Foreign Ministry slammed Kiev's action, saying "(i)f Russians have been taken hostage, this will be qualified as a gross violation of international law, and consequences will follow immediately," adding:

"We are establishing the circumstances of the incident in order to implement adequate measures."

"This certainly does not promote launching the Russian-Ukrainian negotiations. If Kiev wants to make our relations even a little bit better, it should immediately release the tanker."

So far, Zelensky is as hostile to Russia as his predecessor Poroshenko. He continues aggression on Donbass, including use of banned terror weapons.

According to Fort Russ, a "white phosphorous shell" landed in the garden of a Donbass resident, explaining "(h)e survived only by (a) miracle and managed to put the fire out."

"Fragments of phosphorus which he took away to the garden were still burning for days." The terror weapon burns skin to the bone on contact, water unable to extinguish it.

Zelensky's party will have control of parliament by allying with Voice and independent candidates, according to Opposition Bloc deputy Evgeny Balitsky.

Candidate Zelensky prioritized ending war in Donbass. As president, he continues what's been ongoing since spring 2014.

There's no end of it in prospect because Trump regime hardliners want it continued.

Zelensky's actions so far show he salutes and obeys US higher authority orders, not a good sign looking ahead.