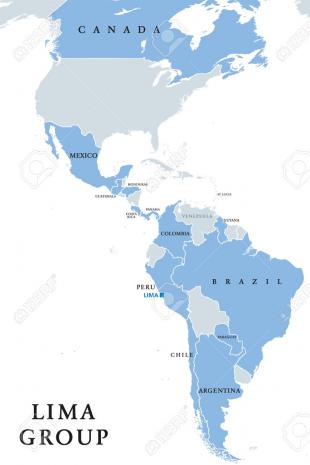 Lima Group countries abandoned their sovereignty to US interests.

It's a Trump regime cobbled together "coalition" of 12 Latin American anti-Bolivarian social democracy countries plus Canada.

They're allied with the US plot to replace Venezuela's legitimate government with pro-Western fascist tyranny, along the US gaining control over the country's vast oil reserves, the world's largest.

The group was formed in August 2017 in Lima, Peru. Its Latin American member states include  Argentina, Brazil, Chile, Colombia, Costa Rica, Guatemala, Honduras, Mexico, Panama, Paraguay and Peru — plus longtime US colony Canada, joined at the hip with its predatory agenda. The same goes for all Lima Group countries.

The so-called Lima Declaration states that "foreign ministers and representatives (of its member states aim) "to address the critical situation in Venezuela and explore ways to contribute to the restoration of democracy in that country through a peaceful and negotiated solution (sic)."

Their actions flagrantly breached binding international law, unjustifiably justifying them based on Big Lies.They're hostile to the rule of law and democratic rule everywhere. They oppose sovereign Venezuelan rights.

Ordinary Americans have no say over how they're governed, voting an exercise in futility. The best "democracy" money can buy defines the US system.

It's "democracy for the few," Michael Parenti explained in his classic book on US governance, saying:

"(P)roponents of the existing social order have tried to transform practically every deficiency in the US political system into a strength."

They perpetuate the myth that "millions of nonvoters (half or more of the electorate) are content with present social conditions, (and) the growing concentration of executive power is a good thing because the president is democratically responsive to broad national interests (ones affecting the public)."

They falsely claim that shutting out independent voices is a virtue, not a vice. The nation's founders ruled out democracy the way it should be, a notion they abhorred so they created a fantasy version.

Governance from inception was and continues to be for privileged interests exclusively, intolerant of democratic rule at home and abroad — why Venezuela is targeted for regime change, notably because of its oil riches the US wants control over.

Parenti described the American way as a system designed to "resist the pressure of popular tides" and protect "a rising bourgeoisie('s)" freedom to "invest, speculate, trade, and accumulate wealth" the way things work for its monied interests today.

A nation's greatness is measured by its freedom from "poverty, racism, sexism, exploitation, imperialism, (and) environmental devastation" — polar opposite how dark forces run the US, wanting all other nations subjugated to its interests.

On August 6, Lima Group foreign ministers and representatives met in Lima, Peru, their 15th session, activities and pronouncements of participants controlled by the Trump regime, including a statement issued following Tuesday's meeting — filled with disinformation and Big Lies.

They falsely claimed to be seeking "a peaceful and democratic way (sic) out of the rapidly deteriorating crisis" — manufactured in the USA, a reality they ignored.

They lied about the state of human rights in the country. They support the forceful toppling of legitimate President Maduro.

Their notion of "free and credible presidential elections" is polar opposite democracy the way it should be, a process they abhor, notably in their own countries.

They're controlled by Trump regime hardliners, serving their interests at the expense of regional peace, equity and justice.

Days earlier, President Maduro denounced the Trump regime's hostile agenda against Venezuela. The country "is the victim of a brutal, criminal multidimensional aggression," he said, adding:

"The people of the United States should know that this is a war. Experts call it an unconventional war. It is an economic, financial, trade war" — what I call war by other means.

Maduro believes the Venezuelan people "will defeat all of these (US) criminal policies."

It's vital for Russia, China, and other nations to stand in solidarity with the county's legitimate leadership and people — defeating the Trump regime's hostile agenda by unifying against it.

The Covid "Crisis" Was A Hoax From The Beginning