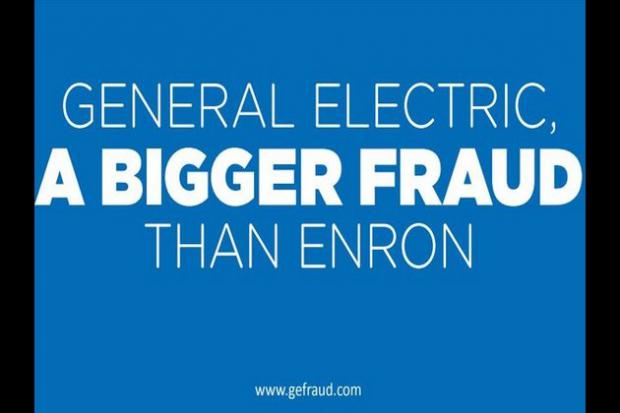 It rescinded regulations in place since 1922. Derivative scams went wild.

Enron fleeced investors and energy purchasers with impunity until its house of cards collapsed.

They turned the 2008-early 2009 economic downturn into a Great Depression for most households, exacerbated by neoliberal harshness.

Economic hard times continue for most US households. Maybe another sharp leg down is coming — turning America more into a nation of paupers than already, while privileged interests get richer at their expense.

He was later convicted of securities fraud, investment advisor fraud, mail fraud, wire fraud, money laundering, false statements, perjury, making false filings with the SEC, and theft from an employee benefit plan — sentenced to 150 years imprisonment for all of the above grand theft, swindling thousands of investors.

Markopolos is at it again, along with John McPherson, this time targeting once-bellwether Dow stock General Electric (GE).

Their website gefraud.com said after nearly a year of analyzing the company's financials and accounting practices, they discovered what they called "an Enronesque business approach that has left GE on the verge of insolvency," adding:

"GE has been running a decades long accounting fraud by only providing top line revenue and bottom line profits for its business units, and getting away with leaving out cost of goods sold, SG&A, R&D and corporate overhead allocations."

"To make it impossible to compare GE's numbers across multi-year time periods, GE changes its Financial Statement reporting formats every few years. This is only detectable by reading at least 10 years of 10-K's back to back. We read 17 years from 2002-2018."

Last Thursday, GE stock plunged 10% on the news, recovering much of the loss the next day. What's ahead remains to unfold.

Markopolos called the analysis of GE's financials his Fraud Investigators Team's "ninth insurance fraud case in the past nine years and it's the biggest, bigger than Enron and WorldCom combined," adding:

"GE's $38 Billion in accounting fraud amounts to over 40% of (the company's) market capitalization, making it far more serious than either the Enron or WorldCom accounting frauds."

The team alleges that GE committed accounting fraud by concealing $29 billion in longterm care insurance losses, another $9.1 billion in loses from a 2017 investment in oilfield services company Baker Hughes.

It claims GE buys businesses at high prices, selling them later at huge losses, "baking its ledgers and cooking its books" to conceal them.

Accusations "by Mr. Markopolos are meritless. The company has never met, spoken to or had contact with Mr. Markopolos, and we are extremely disappointed that an individual with no direct knowledge of GE would choose to make such serious and unsubstantiated claims," adding:

"Mr. Markopolos openly acknowledges that he is compensated by unnamed hedge funds. Such funds are financially motivated to attempt to generate short selling in a company's stock to create unnecessary volatility."

True or false, the Securities and Exchange Commission (SEC) and US Justice Department are investigating the company's accounting practices.

"(T)hey revealed (that) GE was hiding massive loss ratios, the highest ever seen in the LTC (Long-Term Care) insurance industry, along with exponentially increasing dollar losses being absorbed by GE, said Markopolos in his team's report, adding:

"(A)pproximately 86% of GE's LTC claims are ahead of them and the accompanying losses are growing at an exponential and un-survivable rate."

"My team has spent the past 7 months analyzing GE's accounting and we believe the $38 Billion in fraud we've come across is merely the tip of the iceberg."

If SEC and/or Justice Department probes into GE's accounting practices uncover anything similar to what Markopolos' team claimed and don't conceal it, the corporate giant could fall like Enron and WorldCom years earlier.

"Chief investment officers, portfolio managers, analysts, and directors of research would all comment on how they believed GE's earnings numbers couldn't be true because they always met or beat consensus earnings estimates every quarter, year after year, no matter what the economy was doing," the team's report said — an obvious red flag.

Based on his team's findings, Markopolos believes once-bellwether GE is heading for bankruptcy, claiming accounting fraud by the firm dates at least from the mid-1990s when Jack Welch was chairman and CEO.

The company uses "many of the same accounting tricks as Enron did, so much so that we've taken to calling this the GEnron case," said Markopolos.

Is it heading for the same fate? The company was co-founded by Thomas Edison, JP Morgan and others.

Its 2018 revenue was $121.6 billion. Its debt load last year was double its market cap, its credit rating cut to BBB+.

After losing 25% of its market value in Q I and II last year, the Dow Jones Industrial Average (DJIA) removed the company from its 30-stock index.

For the year, it lost 57% of its market value, one of the worst DJIA performers. From 2000 through last year, its market value fell from around $600 billion to about $65 billion.

In mid-December 2018, the Wall Street Journal headlined "GE Powered the American Century—Then It Burned Out," adding:

"(T)he company that was once America's biggest…became a shadow of its former self."