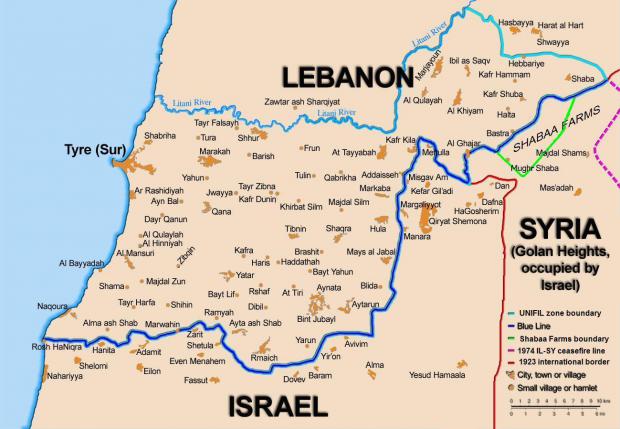 Manufacturing nonexistent threats is common US/NATO/Israeli practice. Members of the block and the Jewish state face no threats to their national security.

So they're invented to pursue their hostile agendas. It's unlikely that Netanyahu wants war — other than as junior partner to US aggression like what's ongoing endlessly in Syria.

"The international community is responsible for restraining Israel's actions, which are taken in domestic electoral interests."

In response to Israel's preemptive attack, Hezbollah "destroyed (an IDF) military vehicle on the road to the Avivim barracks (in the country's north), killing and wounding those inside," according to Lebanon's Al Mayadeen television.

Israeli drones used the terror weapon to firebomb a Lebanese grove near the border separating both countries, setting it ablaze.

Netanyahu regime-provoked incidents risk war if pushed too far. On Saturday, Sputnik News reported that the IDF is "preparing ground, air and naval troops for the possibility of a major attack by Hezbollah."

Its fighters never launched strikes preemptively, only in response when attacked, Israel a major threat to their security, Lebanon and the region.

The Trump regime reportedly demanded that Hezbollah not respond to Israeli aggression — rejected by its ruling authorities.

Its Secretary General Nasrallah said preemptive Israeli attacks were the first on Lebanon since its 2006 war of aggression on the country.

On Monday, Lebanon's Prime Minister Sa'ad Hariri said his government seeks to avoid "any slide towards a serious escalation, but this requires the international community to prove its rejection of this flagrant (Israeli) violation of our sovereignty and of resolution 1701."

Unanimously adopted following Israel's 2006 aggression on Lebanon, it mandated a full cessation of hostilities by both sides, among other provisions.

Like the US, Israel does what it pleases, breaching international law with impunity, Palestinians bearing the brunt of its viciousness, Syria aggressively attacked repeatedly by its warplanes — Lebanon now in the line of fire.

On Sunday in Moscow for meetings with his counterpart and other Kremlin officials, Iranian Foreign Minister Zarif said Israeli aggression against regional countries will be discussed — along with "talks on bilateral cooperation."

The goes as well for Iran and Hamas, threatening no one, wanting peace, not war. DF falsely claimed otherwise.

It turned truth on its head, suggesting "an Iranian backed war of attrition from Lebanon" may be planned.

The Islamic Republic never attacked another country throughout its 40 year history — what the US, NATO and Israel do repeatedly.

He called it "a clear breach of the sovereignty and integrity of an independent UN member state and against international security," adding:

"The bankrupt Israeli regime, with the international community's meaningful silence and the US' lavish supports, is trying to undermine the Lebanese people's great resistance."

Hezbollah's response to Israeli aggression showed it will retaliate against IDF strikes.

The ball is in Netanyahu's court. Does he want conflict with Lebanon, believing it may help his reelection?

Or will IDF commanders warn him against attacking an adversary able to hit back hard against Israeli targets anywhere in the country, causing numerous casualties and significant damage?

The Jewish state is vulnerable, Hezbollah with much greater firepower than in 2006 when it embarrassed IDF ground forces.

If Netanyahu foolishly wants war with Lebanon, Israel will get a belly full in response.