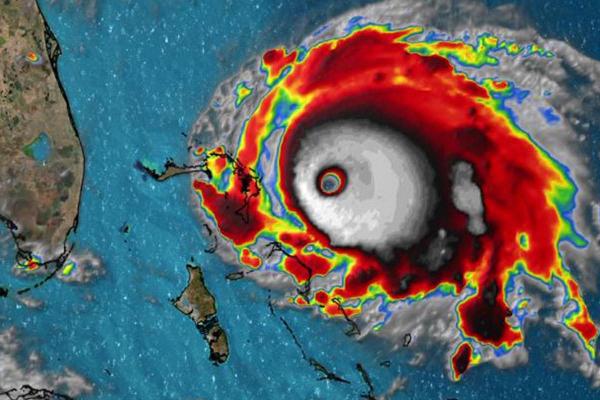 With winds reaching 185 mph, gusts much higher, Hurricane Dorian is the second most powerful Atlantic region storm on record.

On September 1 at 10:00 AM Eastern time, the National Hurricane Center said Dorian largely stalled over the Bahamas, moving at about 1 mph, winds at 165 mph, gusts to around 200 mph.

It's "SITTING OVER GRAND BAHAMA ISLAND WITH EXTREMELY DANGEROUS

"This is a life-threatening situation. Residents on Grand Bahama Island should not leave their shelter when the eye passes over, as winds will rapidly increase on the other side of the eye."

"Residents in the Abacos should continue to stay in their shelter until conditions subside later today."

Storm surge waves are up to 23 feet above normal and dangerously high winds caused "extreme destruction" in the Bahamas.

Prime Minister Hubert Minnis tweeted: "This is probably the saddest and worst day for me to address the Bahamian people."

Bahamas' Ministry of Tourism and Aviation director general Joy Jibrilu called the storm "devastating. There has been huge damage to property and infrastructure. Luckily, no loss of life reported" so far.

Large parts of the Bahamas are flooded, thousands of homes damaged or destroyed, power lines down, cars overturned.

In parts of the Abaco Islands in the northern Bahamas, "you cannot tell the difference as to the beginning of the street versus where the ocean begins," said PM Minnis.

"Only a slight deviation to the left of the official forecast would bring the core of Dorian near or over the Florida east coast," the National Hurricane Center warned, adding:

"On (its current) track, the core of extremely dangerous Hurricane Dorian will continue to pound Grand Bahama Island through much of today and tonight."

"Although the official forecast does not show Dorian making landfall along the Florida east coast, it is still possible for the hurricane to deviate from this forecast, and move very near or over the coast."

"Slow weakening is forecast, but fluctuations in (wind) intensity could occur couple of days…Dorian is expected to remain a powerful hurricane during the next few days."

NHC director Ken Graham explained that "(i)t just takes a little wiggle, a little movement, a little jog, and then all of a sudden (the storm is) a little closer to the coast."

"You can still see a situation where this moves right up the coast or maybe a little bit inland and that's going to cause a lot of damage from hurricane force winds…and storm surge."

Coastal areas from West Palm Beach, Florida through Georgia and the Carolinas are at risk of "life-threatening storm surge" conditions.

"Although it remains uncertain just how close the eye of Dorian will get to the Florida east coast, the threat of damaging winds and life-threatening storm surge remains high," adding:

"There will be considerable impacts and damage to coastal areas, with at least some effects felt inland as well!"

Eastern parts of George, South and North Carolina may be hit hard, how severely depends on the storm track.

Another Big One? New Storm Expected On Christmas Week