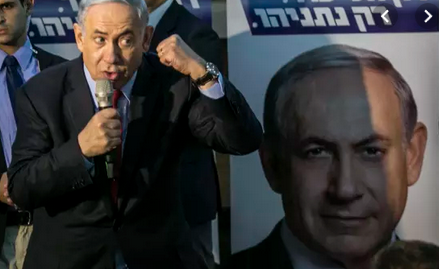 Many politicians use every dirty trick in the book to win votes, especially hard-right extremists in the US, other Western countries and Israel — fantasy democracies, not the real thing.

Hardline extremists run the Jewish state, governance of, by, and for everyone equitably prohibited.

Netanyahu exceeds the worst of Sharonian evil. When South African Archbishop Desmond Tutu visited Israel years earlier, what he saw firsthand in the Territories "reminded (him) of what happened to us black people in South Africa," adding:

He described "the humiliation of the Palestinians at checkpoints and roadblocks, suffering like us when young white police officers prevented us from moving about."

Imperial tool UN Secretary General Antonio Guterres' spokesman distanced him from ESCWA's report, saying it "does not reflect (his) views."

UN Undersecretary General Rima Khalaf said "(i)n recent years, some have labeled Israeli practices as racist, while others have warned that Israel risks becoming an apartheid state. A few have raised the question as to whether in fact it already has."

The report by Richard Falk and Virginia Tilley, titled "Israeli Practices towards the Palestinian People and the Question of Apartheid," discussed how the Jewish state terrorizes defenseless Palestinians.

Instead of praising its accuracy and urging more of the same, Guterres ordered it pulled, wanting its damning hard truths suppressed.

Falk and Tilley concluded what's obvious to honest observers. Israel is an apartheid state, ruthlessly persecuting Palestinians for not being Jewish, waging slow-motion genocide against them.

Racist viciousness is institutionalized in Israel. Netanyahu and majority hardliners enforce it.

Aiming to bolster his reelection prospects, Netanyahu turned truth on its head about Arabs, falsely saying they want "to destroy all of us."

On Wednesday, the Adalah Legal Group for Arab Minority Rights in Israel filed an incitement complaint with Israel's Central Elections Committee (CEC) and attorney general on behalf of the Joint (Arab) List party.

It called on Supreme Court Justice/CEC chairman Hanan Melcer "to issue a restraining order, banning Netanyahu from further illegal dissemination of racist election propaganda, and on Israeli Attorney General Avichai Mandelblit to open a criminal investigation into the Israeli prime minister's incitement to racism for violation of Section 144 of Israel's penal code."

Adalah attorney Sawsan Zaher stressed that Melcer is obligated to prevent use of election propaganda for racist incitement against Arab citizens or anyone else.

Adalah called for Netanyahu to be held accountable for his own. It issued a statement, saying his "most recent statement demonstrates a marked increase in his racial incitement against Arab citizens of Israel."

The Supreme Court earlier prohibited this practice. "(T)here is no disputing that this is unacceptable propaganda. Israel's Central Elections Committee must issue an immediate injunction to stop this racist incitement."

Months earlier, Haaretz accused Netanyahu of messaging tens of thousands of people through Facebook's Messenger system to bolster his campaign, seeking responses from recipients on if they support him.

According to media researcher Yuval Dror, his scheme is "an exercise in intimacy," saying "I'm accessible. I want to hear from you."

Dror calls it a "convoluted way" to collect voter data via Facebook without violating its rules.

"This despicable thug will continue to spill our blood as long as he believes it will help him escape prison."

Netanyahu is fighting for his political life. No matter what coalition emerges triumphant from next week's elections, long-suffering Palestinians will have no allies supporting their rights.