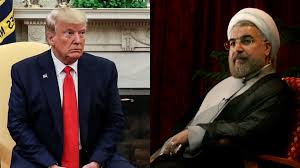 Post-Bolton Thaw in US Relations with Iran?

Its imperial project calls for transforming them into US client states, pro-Western puppet rule replacing their sovereign independence, gaining control over their resources and populations.

The US has been waging war on Iran by other means for 40 years, including by Obama straightaway after the JCPOA was consummated.

In November 1979, the US seized $12 billion in Iranian government bank deposits, securities, gold, and other properties. They included $5.6 billion held by overseas branches of US banks.

A full trade embargo followed. In January 1981, it was lifted under provisions of the Algiers Accords. Most Iranian assets were unblocked. Iranian Assets Control Regulations remained in place.

US war on Iran by other means rages more intensively since Trump took office, co-orchestrated by now departed Bolton and Pompeo, far-right hardliners representing two sides of the same coin.

In the 1980s, Tehran was falsely accused of supporting international terrorism and attacking Persian Gulf shipping.

It prohibits US and foreign oil development investments. Violators face stiff penalties. They include denial of Export-Import Bank of the United States help, rejection of export licenses, and/or sanctions.

In 2008, banks and other US depository institutions were prohibited from processing transfers between Iranian and non-Iranian banks.

In 2010, the US Comprehensive Iran Sanctions, Accountability, and Divestment Act (CISADA) became law.

Exporting goods, technology, or services to Iran are prohibited, including from offshore locations.

US individuals and companies are prohibited from engaging in purchases, sales, transportation, swaps, financing, or brokering transactions related to goods or services of Iranian private or government origin.

They target its legitimate ballistic missile program, its nonexistent WMD development, banning the sale or transfer of military or so-called dual use sales to Iran, and financial help, along with directing the president to sanction violators of CAATSA provisions.

Trump's unlawful May 2018 JCPOA pullout was followed by imposing multiple rounds of tough US sanctions on Iran, including on its energy sector, petroleum related products, other economic sectors, and central bank transactions.

Is any change in Trump regime policy toward Iran likely? Will 40 years of US hostility toward the country be softened — with arguably the most hardline executive branch and congressional policymakers in US history running things?

Will Trump and Iranian President Rouhani meet on the sidelines of the annual UN General Assembly session later this month?

On Wednesday, Rouhani said "as long as there are sanctions in place, there is no point in negotiating with the US."

"Superficial changes in the American governing body do not alter Iran's perception of the nature of US actions and policies," adding:

US war by other means rages against Iran, Venezuela, and other nations, along with its endless hot wars in multiple theaters.

On Wednesday, did Trump suggest he'd consider softening White House policies on Iran? Virtually nothing he says is credible, time and again saying one thing, then going another way.

At the same time, he said "(w)e cannot let Iran have nuclear weapons" he knows or should know they don't seek and never did.

He also claimed sanctions on the country are working. So why lift them.

In two summits with North Korean leader Kim Jong-un, Trump refused to ease sanctions on the country even modestly as a good will gesture.

He demanded full denuclearization and elimination of DPRK ballistic missile capabilities — in return for empty promises, how the US always negotiates, why it can never be trusted.

Will Iran be treated differently, a nation on the US target list for regime change for 40 years? Trump's suggestion otherwise fooled no one in Tehran.

According to the Daily Beast, Trump "is actively considering a French plan to extend a $15 billion credit line to the Iranians if Tehran comes back into compliance with the" JCPOA, "not…impede (Persian Gulf) maritime navigation, (and) commit to Middle East talks"  — citing unnamed sources.

Fact: Iran threatens no one. At peace with its neighbors, it never attacked another nation.

Fact: Its nuclear program has no military component, repeatedly affirmed by IAEA inspectors.

Fact: It wants Persian Gulf maritime traffic operating freely unimpeded. With its coastline extending hundreds of miles, Tehran considers itself the protector of navigation through its waters.

Fact: In good faith, Iran spent years engaged in nuclear talks, agreeing to the JCPOA in 2015, sacrificing more than got back when the deal was consummated — then was betrayed by the Trump regime's pullout and Europe's failure to fulfill its mandated obligations.

President Rouhani and other Iranian officials said they're willing to meet with Trump and other White House officials if he rejoins the JCPOA he illegally abandoned and lifts unlawfully imposed sanctions.

Without a US show of good faith, talks with Trump regime officials will accomplish nothing — the North Korea betrayal scenario to repeat.