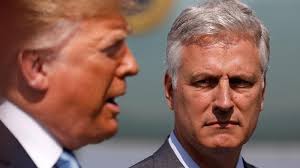 In 2007, he was State Department public-private partnership for Justice reform (sic) in US occupied Afghanistan, later serving as a cultural property advisory committee member.

He served under Condoleezza Rice, later in the Obama regime for Hillary Clinton. In the 1990s, he was a UN Security Council senior legal advisor in Geneva.

According to an official bio, "(h)e was also a member of the (far-right) International Republican Institute (IRI) delegations that observed the presidential election in the Republic of Georgia in October 2013 and the parliamentary election in Ukraine in October 2014" — following the Obama regime's coup, replacing democratic rule with fascist tyranny not mentioned.

Earlier, the (California) Orange County Register called him "the ideal candidate to ensure American global dominance continues"  as navy secretary, a post he was considered for but not chosen.

He's ideologically like his predecessor — pro-war, militantly hostile toward sovereign independent nations on the US target list for regime change, a Pompeo/Bolton clone, differing in style not substance.

Former US deputy assistant war secretary Andrew Exum said "(h)e worked for John Bolton at the United Nations and might be as hawkish."

An unnamed source close to him said he's "definitely in the same school as Bolton on Iran," describing him as a yes-man who's "not going to push back too much."

On Wednesday, "(h)e said his focus would be on keeping Americans safe and rebuilding the military, adding he would advise Mr. Trump privately on Saudi Arabia," the Wall Street Journal reported.

"It is a revolutionary regime (sic) committed to changing the contours of the entire Middle East  (sic) and destroying America's key regional ally, Israel (sic)."

"There is simply no evidence to support the idea that we can trust revolutionary Iran to give up its long-term goal of developing a nuclear weapon and delivery systems (sic)."

He falsely claimed the JCPOA would encourage Iranian adventurism, calling the nuclear deal "a 1938 moment…Iran nuclear disaster" — polar opposite reality.

He called for confronting "autocrats, tyrants and terrorists" — failing to explain they're key US allies worldwide.

In a 2015 Politico op-ed, he said Trump "has been playing up how chummy he will be with Vladimir Putin if he is elected," warning against embracing Russia, the WSJ reported.

In his book, he praised pro-Western Ukrainian fascists for "taking their country back" from the "despotism" of Vladimir Putin (sic).

He falsely called China a "red storm rising" to be countered. He urged the US to "serve notice upon North Korea that it is within reach of American naval airpower."

Bolton is gone, O'Brien his successor. Like most always before, when names and faces change in Washington, dirty business as usual doesn't miss a beat.