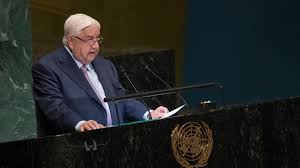 Since early 2011, Syria, its legitimate government, and people have been victimized by US-led aggression.

Initiated by Obama, Trump continues what his predecessor began, including the rape and destruction of Raqqa, massacring thousands of civilians, on the phony pretext of combatting ISIS the US created and supports.

Around 18 bases are used as platforms for endless war, along with training ISIS and other terrorists, used as US imperial foot soldiers, aided by Pentagon-led terror-bombing.

Addressing the UN General Assembly on Saturday, Syrian Foreign Minister Walid al-Moallem affirmed the commitment of his government to continue combatting US-supported terrorists until they're smashed and eliminated.

He stressed that any agreement  on Syria is null and void without consent of its ruling authorities, what international law mandates.

"We meet today at a moment when the picture might be bleak globally," he explained, adding:

"The foundations of global political, economic, legal and security relations are facing their greatest threat since the establishment of" the UN in June 1945 — today with 193 member-states.

Al-Moallem: "Conflicts and threats to international peace and security are on the rise. The prospects of war far exceed those of peace."

"The fate of a balanced global economy has become uncertain. Violations of international conventions and treaties have become the norm, while the unbridled use of illegal measures under international law, such as supporting terrorism and imposing economic embargoes, have gotten out of hand."

"All of this only creates chaos across the world, gradually replacing the rule of law with the law of the jungle, jeopardizing the future of our countries and forcing our people to pay the ultimate price, sacrificing their security, their stability, their wellbeing and their lives."

There's no ambiguity about lead offender USA globally, pursuing its hegemonic aims worldwide, at the expense of peace, equity and justice at home and abroad.

US-dominated NATO, Israel, the Saudis, and their rogue partners operate by their rules — international law discarded in pursuit of their aims, endless wars of aggression their main strategy of choice, other hostile actions accompanying it.

Al-Moallem: "Our people have suffered for more than eight years from the scourge of (US-supported) terrorists who have slaughtered innocent people, caused a humanitarian crisis, destroyed our infrastructure, and plundered the country."

"(P)utting an end to this global nightmare, which haunts everyone, requires a genuine international will" — what's sorely lacking, Europe and most regional countries supporting US aggression in multiple theaters.

"Tens of thousands of foreign terrorist fighters have been brought to Syria from more than 100 countries, with the support and cover of states that are known to all" — notably the US.

Syria is Washington's war, continuing endlessly as long as its hardliners reject restoration of peace and stability to the country.

Al-Moallem: "It is known to all that Idlib (province in northern Syria) currently hosts the largest gathering of foreign terrorist fighters in the world, according to the reports of specialized Security Council Committees themselves."

Supported by the US and its imperial partners, they continue waging terror war on Syrian forces, civilians, and Russia's Khmeimim airbase — while holding around three million Idlib residents hostage as human shields.

Erdogan's regime actively "provide(s) (Idlib) terrorists with all forms of support, including weapons that are more sophisticated."

"Al-Qaeda-affiliated al-Nusra Front has taken control of 90% of Idlib, and the Turkish observation points established inside Syria have been used to support these terrorists and block the advances of the Syrian army in its war against them."

"The Turkish regime is now rushing, with the support of (the US and other) Western countries, to protect al-Nusra Front and other terrorist groups there just as they have done before."

"The United States and Turkey maintain an illegal military presence in Northern Syria."

"They have been so arrogant to the point of holding discussions and reaching agreements on the creation of a so-called 'safe zone' inside Syria, as if they were planning to establish this zone on American or Turkish soil!"

"This is a violation of international law and the UN Charter. Any agreement about any part of Syria without the consent of the Syrian government is condemned and rejected in form and in substance."

"Any foreign forces operating in our territories without our authorization are occupying forces and must withdraw immediately."

"If they refuse, we have the right to take any and all countermeasures authorized under international law."

"Along with our fight against terrorism, we have been committed to moving the political process forward."

"We are participating in the Astana meetings, which are proving effective, and we welcomed the outcomes of the Syrian National Dialogue Congress in Sochi, including the convening of a committee to discuss the constitution."

"Simultaneously, Syria is making tremendous efforts to improve the humanitarian situation on the ground and rebuild what the terrorists destroyed."

"Significant progress has been made despite the illegal and inhumane economic blockade that some countries have imposed on our people."

"The United States has even threatened companies participating in the Damascus International Fair in order to stifle any economic activity in Syria."

"Failing to achieve their goals through armed terrorism, these countries have resorted to economic terrorism, an equally brutal form of terrorism, imposing a blockade and unilateral coercive economic measures."

Along with Pentagon, UK and French warplanes, Israel terror-bombs Syrian targets at its discretion — what naked aggression is all about.

The scheme is all about wanting an Israeli rival eliminated, isolating Iran regionally, Trump regime terror war raging against both countries — on Iran by full-scale economic terrorism, targeting its economy and people.

Instead of challenging lawless US actions, raping and destroying one country after another, responsible for millions of casualties and appalling human suffering, high crimes of war and against humanity — the world community yawns and does nothing.