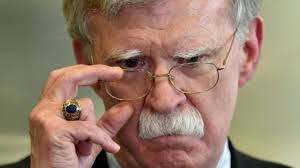 Raging hawk Bolton never met a sovereign state not controlled by the US he didn't want to smash so Washington could gain another imperial trophy.

He fits the definition of what psychologist Robert Hare calls "dissocial personality disorder," including "coldheartedness," a "callous unconcern for the feelings of others," lack of remorse, shame or guilt, and other abnormal behavior — notably seeking power over others by brute force if other methods fail.

In his first public address since sacked as national security advisor, he spoke at the militant Center for Strategic & International Studies.

His remarks were an exercise in fear-mongering mass deception, focused on nonbelligerent North Korea, threatening no one.

He falsely called its ruling authorities a "grave and growing threat…to international peace and security" — polar opposite reality, what clearly applies to the US and its imperial partners in high crimes.

Throughout its post-WW II history, the DPRK never attacked another country, what Bolton conveniently omitted from his remarks.

Its nuclear weapons and missiles are solely for self-defense, genuinely concerned about the threat of US aggression.

The US is the only nation ever to use nukes against an adversary — gratuitously after Japan offered to surrender, no longer posing a threat to Washington or the Indo/Pacific at the time.

Translation: For Bolton and likeminded extremists, it's "unacceptable" for nations on the US target list for regime change to maintain a significant deterrent against its aggression.

Bolton: "(I)t seems to me clear that the DPRK has not made a strategic decision to give up its nuclear weapons."

Fact: Pyongyang would have no need for a nuclear deterrent if a credible US threat didn't exist.

Bolton: "I think the strategic decision that Kim Jong-un is operating through is that he will do whatever he can to keep a deliverable nuclear weapons capability and to develop and enhance it further."

Fact: As long as a credible US threat exists, nations it seeks control over would be foolhardy to be defenseless against its potential aggression.

Bolton repeated what he said earlier about seeking the 2003-04 Libya model in dealings with North Korea.

Pyongyang has no intention of entrapping itself the same way. It's willing to abandon its nuclear arsenal only in return for iron-clad security guarantees, an end to decades of uneasy armistice, removal of unacceptable sanctions, and normalization of relations with the US, West, and other countries.

According to him and likeminded extremists, it OK for the US to maintain an arsenal of menacing thermonukes, banned chemical, biological, and other terror weapons.

It's OK for the Pentagon to smash countries unwilling to subordinate their sovereign rights to US interests.

It's OK to kill countless millions of defenseless civilians in multiple countries on the US target list for regime change.

It's OK for the US to be the world's leading human and civil rights abuser on a global scale — over a longer duration than any other nation in world history.

It's OK for US rage for dominance to threaten everyone everywhere, including use of nukes against any nations it seeks to smash.

Bolton is psychopathologically deranged. His departure from the Trump regime changed nothing. Others like him infest the White House, war and state departments.

He outrageously claimed "there is only one country in the world that can stop nuclear proliferation, and we're it" — a nation with menacing thermonukes deployed worldwide on land, in the air, at sea and beneath it, humanity jeopardized by the threat to unleash them.

Bolton is gone. The ominous threat of US aggression on nations it wants co-opted as client states remains.