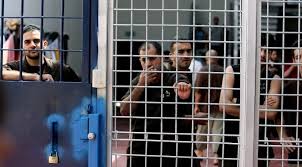 Torture and Murder of Palestinians in Israeli Prisons

B'Tselem published numerous reports on Israeli use of torture and other forms of abuse against Palestinian detainees — arrested and imprisoned for political reasons.

In November 2017, the organization said the following:

"The Israel Security Agency's (ISA) interrogation regime relies on isolating interrogatees from the outside world and uses holding conditions to weaken interrogatees in body and spirit."

"The cruel, inhuman and degrading treatment – at times amounting to torture – is a blatant violation of international law and basic moral standards."

"Many authorities facilitate the ISA's operations, including the Israel Prison Service, which creates inhuman holding conditions, the Attorney General who gives ISA agents immunity, and the Supreme Court which sanctions the interrogatees' isolation."

Young children isolated from parents are treated as viciously as adults, women as ruthlessly as men.

Former Palestinian prisoners explain they were beaten and otherwise abused during interrogations, held under inhuman conditions in windowless, foul-smelling, insect infested cells — many in solitary confinement.

They're forced to endure extreme heat and/or cold, sleep deprivation, while denied showers, a change of clothes, basic hygiene, even toilet paper.

Food is limited and inedible. During interrogations, they're forced to sit bound to a chair for hours or days, or stand for similar painful periods — intermittently threatened and screamed at, their relatives also threatened with harm.

They're commonly denied access to legal counsel — for prolonged periods or not at all.

Inflicting pain and suffering on Palestinian detainees is "dictated from above, not set by interrogators," B'Tselem explained.

In an earlier "No Minor Matter" report, B'Tselem explained how young Palestinian children are criminally abused in detention — the UN Convention on the Rights of the Child flagrantly ignored.

Israeli military law virtually ignores the Convention. Most often children are arrested and detained for stone-throwing in response to Israeli abuses, likely believing it's their only recourse.

They're usually abducted at home pre-dawn, parents not allowed to accompany them — during brutal interrogations denied food, water, sleep, and right to go to the bathroom.

Children and adults, women and men, are judged guilty by accusation most always, the vast majority of charges politicized — convictions when handed down invalid in any legitimate tribunals.

In August, the Addameer Prisoner Support and Human Rights Organization reported that "there were 4,787 Palestinian security detainees and prisoners being held in Israel Prison Service (IPS) facilities." Including others held in jails and other facilities, the number exceeds 7,000.

On October 1, Addameer condemned Israel for "torturing and brutally injuring Samer al Arbeed." He's in critical condition because of his barbaric mistreatment.

In early September, Addameer explained that Bassam al-Sayeh was the third Palestinian (political) prisoner to die in an Israeli prison this year.

"Due to torture, medical negligence, and stalling in giving him the medical care he needed, his health deteriorated and led to 80% failure in his heart and inability to move or speak. Still, he was detained waiting a trail until his death was announced," said Addameer, adding:

Since 1967, 221 Palestinian (political) prisoners died while incarcerated from torture, medical neglect, and other mistreatment.

Currently, the number of ill Palestinian prisoner is around 750, many in serious condition, yet denied treatment.

Addameer: "Medical negligence is (longstanding) systematic Israeli policy used against Palestinian prisoners which should force international bodies including the ICRC and WHO to pressure towards holding the Israeli authorities accountable to their crimes."

"The PPC said Israeli forces exercise psychological and physical torture against Palestinian detainees from the very first moment of their arrest, by beating them with rifle butts on different parts of their bodies, without any consideration to the injury of some detainees. This practice has resulted in severe injuries, which has caused amputations and diseases that accompanied the prisoners even after their release."

In detention, Palestinians endure virtually every imaginable form of abuse and degradation — intended to break their bodies and will.

Press TV said "at least 13 Palestinian lawmakers are currently imprisoned in Israeli detention facilities. Nine of them are being held without trial under administrative detention" — none guilty of any criminal offense.