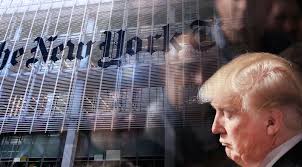 Tempest in a teapot Ukrainegate unleashed a blitzkrieg of NYT anti-Trump venom — for the wrong reasons, ignoring the most important right ones since he took office.

Daily Times editions continue the assault, including on journalism the way it should be, long ago abandoned by the self-styled newspaper of record in its own mind.

The speaker is a longtime imperial tool/corporate shill.

Paul Craig Roberts slammed Schiff, saying he "epitomizes the total collapse of Democratic Party integrity" — the crowd I call undemocratic Dems for partnering with GOP war on humanity at home and abroad.

Pelosi, Schiff, and their Dem collaborators are criminally culpable. So are the Times and other establishment media, acting as their collective press agent.

Time and again, Trump's worldview is wrongheaded, his actions deplorable, a figure I sharply criticize for clearly justifiable reasons.

"He should resign from office in disgrace, and frankly they should look at him for treason."

The Times virtually cheerled House Dems, vowing "to subpoena the White House" as part of the Ukrainegate/impeachment inquiry scam — part two of the failed/discredited Russiagate hoax.

What's going on is dirty politics at its worst. It's all about Dems seeking an advantage over Trump and the GOP in 2020 elections — unrelated to the rule of law and justice.

Pelosi, Schiff, their Dem and media collaborators are contemptuous of governance the way it should be.

It was long ago abandoned in Washington by both right wings of the one-party state, each seeking an edge over the other when farcical/undemocratic elections are held — reflecting rule of, by, and for the US privileged class exclusively, ordinary people scorned and abandoned.

In its latest edition, the Times also headlined:

"Schiff Got Early Account of Accusations as Whistle-Blower's Concerns Grew"

Roberts explained that the character assassin, calling himself or herself a whistleblower, breached the statute pertaining to this activity.

The individual clearly acted in cahoots with others. Most likely Dems and US intelligence community orchestrated what happened.

They're either trying to railroad Trump from office like Nixon was mistreated, or more likely, make him unreelectable in November 2020 — the scam likely to fail like Russiagate.

"Joe Biden Fires Back at Trump: You're Not Going to Destroy Me"

He's done plenty to self-destruct, red meat for Trump's team to finish him off as a viable candidate.

"Attention Foreign Leaders Planning to Visit the White House: A Stoic Expression Is Key to Survival"

"Fact-Checking 4 of Trump's Claims About the Impeachment Inquiry"

State Department inspector general Steven Linick disappointed Dems, the Times, and other anti-Trump media by delivering to Congress press clippings, photos, emails, memos, and other materials, not laying a Ukrainegate glove on DJT.

"Trump's Assault on the State Department Must Be Stopped"

"How the Law Protects Intelligence Whistleblowers, and Leaves Them at Risk"

All of the above, and volumes more in daily editions, show the NYT is desperate to use every unscrupulous trick it can invent to delegitimize and discredit Trump for the wrong reasons.

The most important ones are ignored, major wrongdoing committed by Washington's bipartisan criminal class.

1 Comments in Response to NYT Acting as Trump's Judge, Jury and Executioner