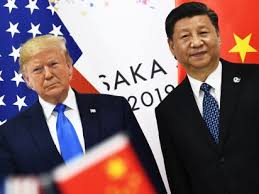 They're unrelated to the bilateral trade imbalance — caused by corporate America shifting operations to China and other low-wage countries.

They and US policymakers are to blame, not recipient countries.

Another round of US/China talks are scheduled for October 10 in Washington, impasse likely to continue — ahead of an October 15 Trump regime deadline for imposing new US tariffs on $250 billion worth of Chinese imports — from 25  to 30%.

Earlier talks were followed by US tariff increases, not progress on resolving bilateral differences — this time likely to be no different.

At the same time, the Trump regime imposed new tariffs on $7.5 billion worth of European commercial aircraft, agricultural, and industrial goods — ranging from 10 - 25%, effective October 18.

Brussels will surely retaliate in kind, imposing duties on US imports. Escalated US tariffs war on two fronts comes as global economic conditions are softening, the worst time, likely to weaken things further.

Last March, the study for the US Chamber of Commerce estimated that protracted Sino/US trade war could cut US economic growth by $1 trillion over the next decade.

An analysis by the Rhodium Group found that US tariffs up to 25% on $200 billion worth of Chinese imports would negatively impact US GDP, investments, employment and inflation — the US tech sector to be one of the hardest hit.

US tariffs up to 25% or higher on all Chinese imports would make things much worse — where things may be heading as bilateral impasse continues.

China's economy is also negatively affected, its growth slowing. In Q II, it was at the lowest year-over-year increase in at least the past 27 years.

"The darkening outlook for trade is discouraging but not unexpected. Beyond their direct effects, trade conflicts heighten uncertainty," adding:

"Job creation may also be hampered as firms employ fewer workers to produce goods and services for export."

If US trade tensions with China and Europe escalate, the above forecast could be revised much lower, Brexit uncertainty another negative factor, causing UK investment to slump.

In September, US manufacturing slumped to the lowest level since June 2009, things likely to worsen if US trade wars continue and escalate.

Weakness in the US, China and Germany negatively affect global economic conditions. At 41%, the new US export orders index was at its lowest level since March 2009, the bottom of financial crisis conditions.

In 2019, global container shipping rates are down 34% — 43% down year-over-year in September, forcing carriers to cut back sharply, according to FreightWaves.

Global economic deterioration is worse than since the onset of the 2008-09 Great Recession.

Two days of sharply down equity valuations on Wall Street do not a trend make. Yet October so far is the weakest Q IV start in the past decade, a worrisome sign if continues.

Last week, economist John Williams said risks are "sharply elevated (for) a near-term stock market crash (because of) a confluence of unusual risk factors, either developing or already in play."

Main street never recovered from the decade-earlier recession, ordinary Americans still suffering from real unemployment at over 20%, the vast majority of US workers burdened with punishing underemployment.

The wealth gap between the nation's privileged class and ordinary Americans is greatest since the late 19th/early 20th century gilded (robber barons) age.

Another severe protracted recession will likely further thirdworldize the US, more greatly exacerbating current ruler-serf conditions in the world's richest country — serving privileged interests exclusively at the expense of most others.

We don't need no stinkin' foreigners, or their governments or nations. Most of the foreign nations are simply draining our wealth and strength from us. We are big enough and capable enough to do it all. We have been proving this for decades by giving foreign aid to other nations. Get those monkey-nations off our back. Raise tariffs so high that jobs come back to the U.S., and so that the tariff money is enough to completely shut down the IRS and State taxation, including sales tax. We want our freedom from those monkey-nations. Let us take our power back and show them what REAL manufacturing - and FREEDOM - are like.

For The First Time, Wall Street Admits That "Civil Unrest" Could Crash Markets

U.S. faces shortage of up to 8 billion meals in next 12 months, leading food bank says