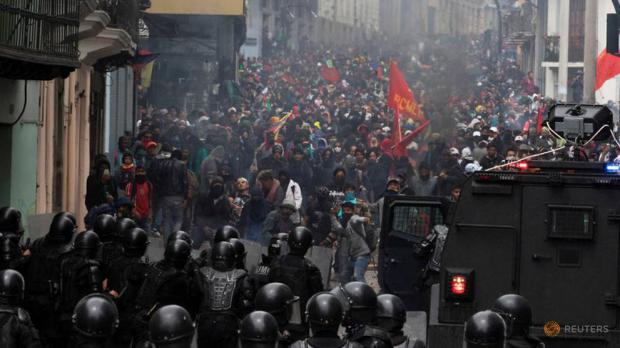 Hello everyone! Jona here. In the last few days we have been watching all over the news and social media about how people have reacted to the new policies adopted by the Ecuadorian government. I want to help you understand that the protests are not only about the raise in oil prices, but also involve many corruption issues that only a few Ecuadorians know about. A couple of months ago, the government's agreement with the IMF leaked and a group of economists from the "Foro de Economía Alternativa y Heterodoxa" (a forum of intellectuals that study the economic and social aspects of our country) made a tour of Ecuador to let people know about the possible issues that might result from this agreement. The interview below was made by "Lo del momento Loja" with one of the economists that belong to the forum: Juan Carlos Torres. Here's what Torres had to say:

Juan Carlos Torres has a Masters of Economics, and has worked on UTPL for several years in the economics department. A few days ago he was interviewed about his opinion of the new policies adopted by President Moreno. Here's an extract of what this professional thinks:

INTERVIEWER: HOW DO YOU LOOK AT THE CURRENT SITUATION IN OUR COUNTRY?
Economist: This government has a very poor level of popularity and it's very likely that there will be instability after the policies are declared. The government is being very careful. Last week the Vice President asked the people to understand these new rules. I agree, however, I think what we need to understand is that we are facing a problem that was created on purpose. This is the Foro de Economía Alternativa y Heterodoxa's position. To be honest, we think this is a fact. This "crisis" is for the purpose of creating an excuse to take over 50.000 million dollars from public infrastructure through privatization (for example, the CNT, all the hydroelectric facilities, the Pacifico Bank, the Esmeraldas refinery, and the concession of all the highways in the country). If the people behind this crisis achieve their goal they will harm the country for decades, and will make a windfall for their own families for generations to come.

I: WHAT WOULD HAPPEN TO THE ECUADORIANS IF ALL THIS INFORMATION THAT IS LEAKING IS TRUE?
E: Right now the economy is shrinking which means that the level of poverty is increasing. People have less money in their pockets to buy less food and clothing. In these circumstances, it is crazy for Moreno to institute a price increase that will, certainly, make everything more expensive. For a government it's good to add new taxes when the economy is expanding because there is money in the hands of the citizens. But this is not now the case, so the effect will be negative. What does a negative economic effect mean? It means everything will become more expensive. As a result, the higher prices will go to the end user or consumer (almuerzos, medicine, cab and bus rates, etc). What would this increase cause? It will cause poverty and social reactions (they are happening right now). I see Ecuador as a sleeping elephant. It's been quiet, hasn't said anything and this could be the last touch that will wake it up. The final straw. This is a giant that for sure will shake the government.

There are more things to talk about here as well. Companies are supposed to pay an advance in income tax. However, many companies evade taxation, specifically the big ones, because they buy assets they don't need. For instance, there are companies that buy many cars for the members of their families so when tax time comes they declare less profits. In this way they harm the government and also the workers because they will get less profits too. Moreno has decided to eliminate the advance income tax, and this conveys a message: "you are free to evade taxes." Under this logic Moreno benefits the strong companies and punishes the small ones.

I: WHAT ABOUT THE INCREASE OF VAT FROM 12% TO 15%?
E:This agreement was already signed in the document with the IMF. They will do this sooner or later and this tax will be taken from the medium and low class, not the large entreprises.

I: WHAT WILL BE THE EFFECTS ON THE POPULATION?
E:If these policies are applied the following things could happen:
There could be an increase of poverty and crime. One thing is considered a consequence of the other. The higher the poverty, the higher the crime rate. When a person is fired and doesn't have opportunities to work, because he or she has kids to feed, then they decide to work as informal vendors. There is also a significant number of unemployed who choose to rob or assault people. All of this will be a result of the agreement with the IMF which, by the way, was not necessary. I have to say it again, it was NOT necessary to get a loan from the IMF. That was a political move to have an excuse to privatize every single profitable public company in Ecuador. I'll give you another example, right now Moreno is trying to transfer the public oil companies to the private sector. This means the private sector will make more profits and only a small percentage will go to the government. In other words: they will eat the flesh and we'll have the bones. In the last government, we had a contract for participation and it was changed to a contract of production. That means Ecuador got 80% of the cost of the barrels of oil and the companies got 20%. Moreno is working to change that and reverse it. 80% for the oil companies and 20% for Ecuador.

I: WHAT ELSE CAN WE SAY ABOUT MORENO'S RULES?
E: In just one year of his government we had 700,000 new poor people (June 2018 - June 2019). The previous government took 2 million people out of poverty in about eight years. This shows us what the approach of this government is to social wellbeing. It is the zero sum approach of business, where some people are making profits while others will suffer the consequences.

I: WHAT DO THESE POLICIES MEAN TO LOJA?
E: For Loja the problem could be even worse. The second most important type of income for Loja Province is construction. This government has cut investment in social work. It's been a while since they stopped using labour in this sector, therefore, these people don't have a job, they buy fewer goods causing shops to hire less people. It's all a domino effect.

I: ABOUT THE STRIKES IN LOJA -
E: I think the people in Loja are more pacific. During the Correa government, there were no strikes or protests. For about 14 years, people haven't been part of a strike, so new generations are not familiar with these kind of happenings. However, I think it's important to make people aware of the fact that if we don't protest it's because we agree with the new policies. If we don't raise our voice these elite groups will take everything. Let's remember these groups haven't been in power for about 12 years and now they are back in power and want to take back everything they couldn't control in the past years.

I: ABOUT THE LABOR REFORM
E: At present, we have the right to rest on Saturday and Sunday but this is something we fought for and won. The same thing happened with 8 hrs of work. At first people had to work 18 hrs a day. That was a right we won after several battles. In Ecuador we have a 40 hour work week, and we work 5 days per week. The government is looking to make us work from Monday to Saturday. If you are an employee and your employer asks you to come work on Saturday you will have to. The elimination of these labor rights affect families.
Another thing that will affect the workers is the elimination of the employer's retirement pension. For instance, if someone works in a company he/she has the right to retire with a pension paid by the employer besides the one given by IESS. The new policies want to eliminate this right. Young workers don't notice this because it's a decision they are taking from the future. They will mess with you when you are older and you don't have the strength and energy to fight for your rights. In other words, they will eliminate your right to have a decent old age.

I: LAST WORDS TO ADD
E: If the government affects the labour rights they affect every single family. If they affect the families they affect the society. I see society as a big building made of many different bricks, every brick represents one family. The government is weakening the families. They don't care if the "building" falls apart, and they don't care about the families. All they want to do is make money, and this is how I sum up what's happening: GREED
Our government has been captured by powerful economic groups. How else would you explain the economy shrinking while bank profits go up? From June 2018 to June 2019 the profits of the banks increased in 40%. How could you explain this? This is happening because the government is transferring money from the middle and low class pockets to the coffers of the big banks. The banks need to be regulated. There's an entity that has the mission to regulate them but it has also been captured by the banks.

The only thing we can't do is "stay quiet and say nothing." We have to let the government know we don't agree. This is only the first part of these policies. There's a second part they haven't posted yet. We'll talk about it in the future.
Economist: Juan Carlos Torres

The people of Ecuador are NOT happy with their government.