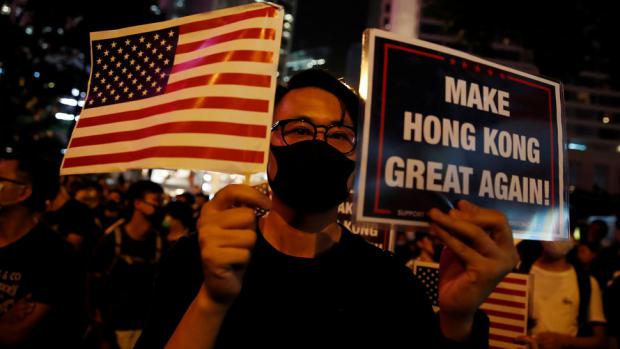 The so-called US Hong Kong Human Rights and Democracy Act of 2019 was unanimously adopted by House and Senate committees.

The measure ignored made-in-the-USA color revolution-style violence and chaos, ongoing in Hong Kong for months, US officials actively collaborating with its leaders.

The measure falsely calls demonstrations "peaceful." It turned truth on its head, claiming the bill "support(s) the democratic aspirations of the people of Hong Kong" — a notion US officials tolerate nowhere, especially not domestically.

It calls for imposing "punitive measures against government officials in Hong Kong or mainland China who are responsible for suppressing basic freedoms in Hong Kong (sic)."

A third measure recognizes US/Hong Kong relations, denouncing Beijing's "interference" in its affairs, along with supporting ongoing (violent, chaotic) protests — ignoring US dirty hands all over them.

The unacceptable measures are the latest examples of how the US illegally meddles in the internal affairs of other nations, a flagrant breach of international and constitutional law.

In response, China's Foreign Ministry spokesman Geng Shuang denounced the measures, saying they'll "not only harm the interests of China and the China-US relations, but also severely undermine the interests of the United States," adding:

"Hong Kong belongs to China and its affairs are purely China's domestic affairs that brook no foreign interference."

"We advise the US side to get a clear understanding of the situation, rein in on the brink of the precipice immediately, and cease to promote the subsequent deliberation of the act and interfere in Hong Kong affairs and China's internal affairs immediately."

Beijing intends "strong countermeasures to firmly safeguard its sovereignty, safety and developmental interests" if US anti-China bills are adopted by the Senate and signed into law by Trump.

Geng noted that US House members ignored "serious crimes such as arson, damaging shops and violent assaults" committed by protesters.

On Wednesday, China's official People's Daily broadsheet slammed passage of unacceptable House measures, accusing the US of "stir(ring) the pot and…fan(ing) the flames of (violent) protests…providing oxygen to the worst political and militant elements within the protest movement."

When Hong Kong Chief Executive Carrie Lam "tries to solve economic problems, and especially when those violent radical protesters and rioters are losing support, the US moves to provide more support to anti-government forces by passing (legislation)."

Without it and other US pot-stirring, the turmoil (might) die out" as protester energy wanes, signs appearing before House members acted on Wednesday, the Senate likely to follow in short order.

Unacceptable US legislation will likely encourage more of the same — commonplace tactics during illegal US color revolution attempts against sovereign states.