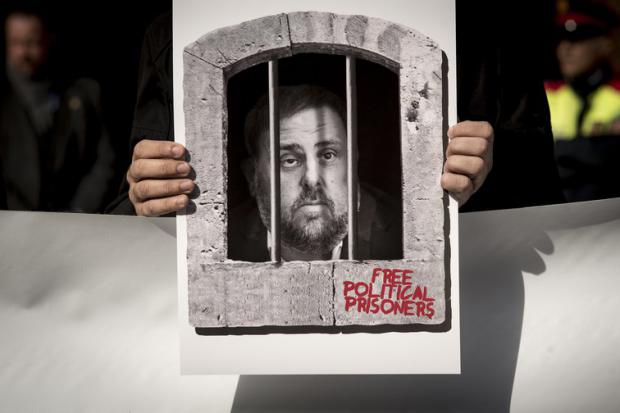 Spain is a fascist dictatorship, masquerading as democratic. Its ruling authorities and unjust high court justices are hostile to fundamental rights affirmed under international law.

Article 1 of the International Covenant on Civil and Political Rights (ICCPR) states:

"All peoples have the right of self-determination. By virtue of that right they freely determine their political status and freely pursue their economic, social and cultural development."

Catalans are entitled to the same rights as everyone else everywhere. Under international law, people everywhere have the right to choose their sovereignty and political status with no outside interference.

This fundamental principle is  regarded as jus cogens, a higher or compelling law.

Twelve activist Catalan politicians were scapegoated for supporting the rights of their people — imprisoned unjustly since 2017.

On Monday, nine pro-independence activist politicians were wrongfully railroaded to from 9 to 13 year imprisonment for sedition and misuse of funds — despite having committed no crimes.

Justice was absent in the courtroom when sentences were announced, how all fascist police states operate.

Combined they received 99.5 years imprisonment for the "crime" of supporting the universally recognized right of self-determination everyone everywhere deserves.

"Where are the limits," he asked? "Can we demonstrate. Can we not demonstrate?" It's a fundamental free expression right.

Moments after sentences were announced, protests erupted in Barcelona and elsewhere in Catalonia, thousands taking to the streets, occupying public places and blocking roads. continuing for a third day on Wednesday.

Dolors Bassa's attorney Mariano Berges said "(w)e did not expect either sedition or embezzlement, nor the crimes for which she was condemned, let alone the years of imprisonment."

Lawyers representing others wrongfully sentenced called verdict against their clients the culmination of a "political (show) trial (with) dangerous implications for freedom of expression."

The arrests, politicized show trials, and wrongful convictions are supported by Brussels and individual EU nations.

Equity and justice no longer exist in the US and other Western countries, police state injustice replacing them.

What happened in Catalonia can repeat anywhere in the West any time against activists for peace, democratic values and the rule of law.