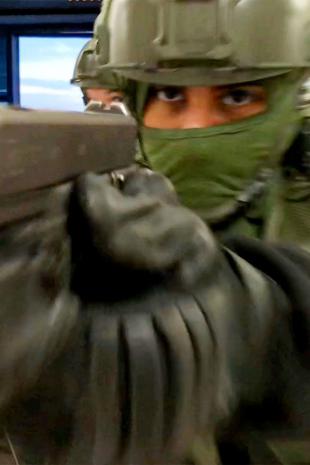 Deals agreed to by the US, NATO, Israel and their imperial partners aren't worth the paper they're written on.

According to Press TV and AFP on Friday, Turkish warplanes terror-bombed northern Syrian sites the day after Erdogan met with Pence and Pompeo — agreeing on a ceasefire.

Deals made by imperial countries relating to foreign territory they unlawfully control have no legitimacy under international law — unless agreed to by the occupied nation, clearly not the case in Syria.

On Friday, Sputnik News reported the following: "Thirteen civilians were killed, and 70 others were wounded in an air strike by the Turkish Air Force on a humanitarian convoy in northeastern Syria," citing Lebanese Al Mayadeen television, adding:

"(T)he humanitarian convoy was heading from the settlement of Tal Tamr to the city of Ras al-Ain" — no report on this terror-bombing by RT.

Erdogan called the above reports "disinformation (and) speculations." Nothing he, Trump, hardliners in his regime, and undemocratic Dems say is credible.

According to the Syrian Arab News Agency (SANA), Turkish cross-border shelling continued on Friday in the Ras al-Ain area.

Southfront was blunt, saying ceasefire in northern Syria "is collapsing," Kurdish fighters saying "(i)f attacks continue, they will use their right to legitimate defense and respond aggressively to the occupation's attacks."

"(A) total of 28 civilians were killed or injured in a series of Turkish airstrikes that targeted (areas near) Ras al-Ayn," said Southfront.

Terms agreed to by the US and Turkey with no validity or legitimacy don't apply to Pentagon-led and Israeli aggression in Syria.

In Israel after meeting with Netanyahu on the Ankara agreement, Pompeo told the Jerusalem Post the following:

The Trump regime's position is "very clear. Israel has the fundamental right to engage in activity that ensures the security of its people (sic)," adding:

"It's at the very core of what nation states not only have the right to do but an obligation to do (sic)."

"The president has committed to continuing that activity that the US has been engaged in now for a couple of years and is aimed at countering ISIS and providing us situational awareness in the region (sic)."

"We know this is a corner where Iran has attempted to move weapon systems across into Syria, into Lebanon, that threatens Israel and we are going to do everything we can to make sure we have the capacity to identify those so that we can collectively respond appropriately (sic)."

Pompeo notoriously turns truth on its head. A litany of anti-Iran Big Lies followed his unacceptable above remarks.

Fact: The only foreign threats to US and Israeli security are invented. No real ones exist — not from Iran, Syria, or any other nations. Pompeo falsely suggested otherwise.

Fact: Nations have the right of self-defense when attacked — no right to attack another state preemptively for any reasons, what aggression is all about, the highest of high crimes, a US, NATO, Israeli specialty.

Fact: Time and again, Trump, Pompeo, and other regime officials unjustifiably justify US aggression by falsely claiming Pentagon forces are combatting the scourge of ISIS both right wings of the US war party support, using jihadists as imperial foot soldiers.

Fact: No credible evidence suggests Iran moved weapons into Iraq and Syria to threaten Israel — a US specialty, notably by supplying them to ISIS, al-Nusra and other jihadists, along with selling them to the Saudis and other despotic regimes for cross-border aggression and internal repression.

According to Pompeo, what the US and Turkey agreed to in Ankara, along with withdrawal of Pentagon forces from northern Syria, should be taken as a sign that the Trump regime is abandoning the country.

Far from it or from other countries where US forces are deployed, according to Pompeo, adding:

"America is committed to countering the threat from Iran," that doesn't exist.

Claiming Tehran is a "fundamental destabilizing force inside the Middle East" is part of the Trump regime's disinformation war on the country.

The region's real threats are from Washington, other NATO capitals, Tel Aviv, Riyadh, and their imperial partners.