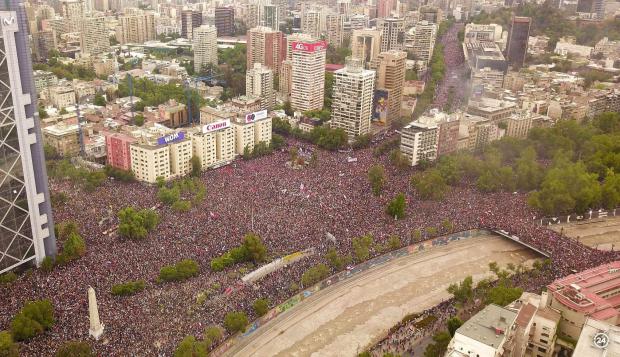 Protests in Chile Against Neoliberal Harshness

Neoliberalism is all about serving privileged interests at the expense of ordinary people, exploiting them so the wealthy and powerful can benefit.

It's about dominance over democracy, profits over populism, and private interests over the public welfare – a zero-sum game benefitting monied interests over all others, societies made unsafe and unfit to live in for ordinary people.

Adam Smith long ago said governments are "instituted for the defense of the rich against the poor."

Ruling authorities and business partner for their own self-interest at the expense of the rights and welfare of working class people — notably in the West and its client states.

For the past two weeks, millions of Chileans have been protesting against exploitive neoliberal harshness, inequality, and deep-seated corruption  — in Santiago, the nation's capital, and elsewhere in the country.

They demand billionaire/fascist president Sebastian Pinera's resignation, new ruling authorities replacing him and his cronies, better wages, education, healthcare, and pension reforms, along with a new constitution, stressing equity and justice for all Chileans.

After declaring a state of emergency on October 18, a greater Santiago area curfew a day later, Pinera deployed military forces to the streets for the first time since Pinochet's fascist rule replaced Salvador Allende's social democracy.

Blood in the streets, the presidential palace in flames, and Allende's elimination ended the most vibrant democracy in the Americas.

In Pinochet's first year in office, inflation hit 375%, thousands lost jobs, US and other Western imports forced closure of local businesses. Hunger, homelessness, poverty, and deprivation replaced equity and justice for all.

By the late 1980s, nearly half of Chilean households were impoverished. Privileged elites benefitted hugely.

Inequality remains extreme today. Chile is one of Latin America's most unequal societies. Longstanding policies shifted wealth to its privileged class at the expense of its ordinary people.

Promises made by ruling authorities to cool mass outrage are hollow, largely ignored and forgotten when calm is restored.

From the other 9/11 in 1973 to today, ordinary Chileans have been exploited to benefit its privileged class and the West.

They want governance serving everyone, not just the privileged few. Chilean inequality created a wasteland for its working class, the way its been for decades.

Notably in Chile and Lebanon, millions are involved against decades of social injustice, controlling the streets, going on strike, engaging in disruptive civil disobedience.

In response, Pinera arrogantly declared: "We are in a war against a powerful enemy…one that does not respect anything and is willing to use violence and delinquency without limits."

Dominant local and Western media echo his false narrative, supporting privileged interests over the rights and welfare of long-exploited Chileans.

Reportedly on Saturday, Pinera asked his ministers to resign. The military ended days of curfew.

According to Reuters, a document it obtained "suggested Pinera was considering replacing the heads of at least nine ministries, including the ministries of interior, defense, economy, transportation and environment."

Chileans was him and all ruling authorities gone, a clean sweep for change.

The struggle for the nation's soul continues, what's needed throughout the hemisphere, the West, and elsewhere.

Positive change never comes top down, always bottom up, popular revolution the only way to achieve it.

Chileans Vote Up or Down on Constitutional Change