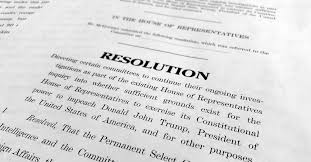 On Monday, anti-Trump Speaker Pelosi released the text of the undemocratic Dems' impeachment resolution, aiming to remove Trump from office for the wrong reasons, ignoring legitimate right ones.

For Dems and supportive media, it's the second time around against DJT after the failed Russiagate witch hunt scam, Ukrainegate with no legitimacy its spinoff.

The resolution outlines procedures for conducting the impeachment probe — to be voted on Thursday, according to Pelosi, passage virtually certain in the Dem controlled House.

House Rules Committee chairman James McGovern said the Dem-led House "continue(s) (its) investigation (into) whether sufficient grounds exist for the House…to exercise its constitutional power to impeach" the president.

According to unnamed White House official, the Rules Committee said Trump will be to participate in the probe, adding: "(E)xplicit participation for the White House…is not in the resolution."

It states the Judiciary Committee is authorized to conduct impeachment proceedings, "including such procedures as to allow for the participation of the president and his counsel."

Thursday's vote, if held as announced, will be the first one since Dems began their impeachment inquiry in late September.

According to a mid-October Gallup poll "52% of Americans now support Trump's impeachment and removal," his approval rating at 39%, adding:

"Currently, 87% of Republicans, 34% of independents and 5% of Democrats approve of the job Trump is doing."

Support for impeachment among Dems "approaches 90%," only 6% by Republicans.

House members are constitutionally authorized to impeach a sitting president. Senate members have sole power to try the executive or other US officials if impeached.

The Constitution's Article II, Section 4 states: "The President, Vice President and all civil officers of the United States, shall be removed from office on impeachment for, and conviction of, treason, bribery, or other high crimes and misdemeanors."

Impeachment is only warranted when criminal offenses of a president or other officials are too serious to ignore.

That's clearly not what Dems want Trump removed from office for, ignoring legitimate reasons the vast majority in Washington are guilty of, notably high crimes of war and against humanity, along with time and again betraying the public trust.

Removing a president or other US official requires a two-thirds Senate super-majority, a high-hurdle never gotten in US history.

The Constitution's Article I, Section 3 states: "The Senate shall have the sole Power to try all Impeachments. When sitting for that Purpose…"

"When the President of the United States is tried, the Chief Justice shall preside: And no Person shall be convicted without the Concurrence of two thirds of the Members present."

"Present" is the key word. Anti-Trump Senate Dems no doubt would show up in force to vote for removing him from office in an impeachment trial is held.

If unknown numbers of GOP senators unenthusiastic about supporting him aren't present, he could be removed from office with a two-thirds majority as long as a minimum of 51 senators participated in the vote.

House and Senate Dems want him sullied for political advantage, seeking an edge in November 2020 elections, what the impeachment scam is all about.

It's unclear how Republicans will respond to their strategy. If numbers in both houses up for reelection in close races fear possible defeat by supporting Trump's retention in office, they might jump ship to boost their own reelection chances.

At this stage, how things may or may not play out is pure speculation. Most often, politicians do what it takes to stay in office.

Ukrainegate is no more credible than Russiagate, what Trump's legal team should be able to use to his advantage.

Targeting him over dealings with Ukrainian President Zelensky is a hurdle his legal team should be able to overcome.

The wildcard is whether he's able to retain enough GOP Senate support to prevent Dems from getting a super-majority of voting members present to remove him.

What never happened before is unlikely ahead but clearly possible.

The impeachment train left the station. Will it be derailed before reaching its destination or be able to remove a sitting president for the first time in US history?

John Adams once said it would take a national convulsion to do it. No doubt, hardcore Trump supporters would be enraged.

How removing him from office, if happens, might affect 2020 presidential and congressional elections is a big unknown.

It could backfire on Dems instead of helping them. Nothing is certain. The fullness of time will tell what's impossible to know now for sure now.