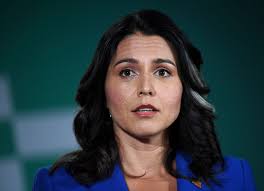 Since entering the race for the nation's highest office, establishment media shunned or demeaned her — the only anti-war progressive running, her agenda polar opposite what both right wings of the US war party stand for.

Hillary smeared her by falsely suggesting she's a Russian asset — "groom(ed) to be (a) third party candidate."

Last week, Gabbard said at a time when "our world is moving ever closer to a nuclear holocaust…when we may be sucked into another even more disastrous war in the Middle East, and tensions with other nuclear powers are escalating, and with that, a new arms race and Cold War that can only end in nuclear catastrophe, I believe I can best serve the people of Hawaii and our country as your president and commander-in-chief," adding:

"As president, I will immediately begin work to end the new Cold War and nuclear arms race, end our interventionist foreign policy of carrying out regime change wars, and redirect our precious resources towards serving the needs of the people here at home."

She passing up a congressional reelection bid to focus entirely on seeking the nation's highest office — stressing she wants to put "people ahead of profits…people ahead of politics…the wellbeing of our people and our planet above all else."

Her WSJ op-ed headlined: "I Can Defeat Trump and the Clinton Doctrine," saying:

"The US (on her watch) will stop trying to overthrow governments and police the world," adding:

"I'm running for president to undo Mrs. Clinton's failed legacy. From Iraq to Libya to Syria, her record is replete with foreign-policy catastrophes. It's a primary reason why I resigned as vice chairman of the Democratic National Committee in 2016."

Hillary notoriously was the most ruthlessly dangerous presidential aspirant in US history. She remains unaccountable for major war crimes, racketeering and perjury.

If elevated to president and commander-in-chief, endless US wars of aggression would follow, possibly nuclear war, risking destruction of planet earth and all its life forms.

She and her media press agents never forgave Gabbard for not endorsing her. As for accusations about being backed by Russia or other foreign powers, it's part of a propaganda smear campaign to demean and weaken her chances of gaining increased support she deserves.

Gabbard: "Those who are indebted to the war machine and the overreaching intelligence agencies, as well as their cheerleaders in the media, are determined to take me down because they know they can't control me. I'm directly challenging their power."

Hillary is a hugely unpopular two-time loser. Gabbard asked why would Dems think a third run by her for the nation's highest office "would result in anything different," adding:

Whether she's "on the ballot or not, her foreign policy will be, as many of the (Dem) candidates adhere to her doctrine of acting as the world's police, using the tools of war to overthrow governments we don't like, wasting taxpayer dollars, costing American lives, causing suffering and destruction abroad, and undermining America's security."

"A Gabbard presidency would mean the end of trying to police the world, no more overthrowing governments, an end to the new Cold War and nuclear arms race, and redirecting our resources to urgent needs at home."

"That doesn't mean I'm an isolationist. I will lead with a robust, positive foreign policy based on diplomacy and cooperation rather than confrontation and conflict."

"Those who follow the Bush-Clinton doctrine believe the only way to interact with other nations is by bombing them or starving them with draconian sanctions."

It's also the Obama doctrine, the same agenda of most past US presidents and vast majority of congressional members.

It's an imperial doctrine, demanding other nations bend to Washington's will or be smashed by war and/or economic terrorism.

It's a neoliberal harshness doctrine, serving privileged interests exclusively at the expense of equity and justice for all.

It's an anti-democratic, anti-human and civil rights doctrine, notions the US ruling class and its supportive media abhor.

Gabbard said if elected president, she'll work to "revers(e) the damage the Bush-Clinton doctrine has done to America and the world."

Anthropologist Margaret Mead once said: "Never doubt that a small group of thoughtful, committed citizens can change the world. Indeed, it's the only thing that ever has."

Activism for positive change requires taking to the streets, putting bodies of committed people on the line, no longer tolerating the intolerable status quo — exploiting ordinary people so privileged ones can benefit.

The only solution is nonviolent popular revolution — headed by responsible leadership for change to believe in. If achieved, it would be the real thing for the first time in US history.

Aspirants for high office on a peace, equity and justice agenda like Gabbard supports have scant chance of being elected because US dark forces won't tolerate positive change.

That's why taking to the streets with commitment to stay the course is the only way to achieve it.

What's gone on or going on in Chile, Haiti, Lebanon, Gaza, Ecuador, France, and elsewhere is needed most of all in the US, other Western societies and Israel — the heart of global darkness.