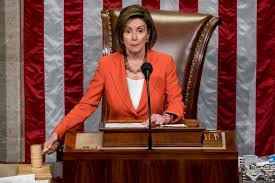 Establishment media support for what's going on is all about wanting undemocratic Dems gaining a political advantage ahead of 2020 presidential, congressional, state, and local elections.

The impeachment inquiry scam is unrelated to legitimate wrongdoing by Trump and his regime — notably high crimes of war and against humanity in multiple theaters, economic terrorism against targeted nations, and support for monied interests at the expense of exploited ordinary people at home and abroad.

Dems and establishment media aren't going near this because the vast majority of congressional members from both right wings of the nation's one-party state and the fourth estate are complicit in the above high crimes.

Targeting Trump on these issues would implicate themselves. So they'll never be raised as long as the impeachment scam continues.

On Thursday, the undemocratic Dem controlled House passed a procedural resolution on how the anti-Trump impeachment inquiry will be handled going forward.

The 232 - 196 vote was nearly entirely along party lines. All Republicans rejected it, along with two Dems in congressional districts won by Trump in 2016, facing close reelection contests.

The politicized vote by House members was one of the body's most shameful.

Even anti-war/progressive Tulsi Gabbard supported the resolution she should have rejected.

NYT anti-Trump rage is all about seeking revenge for his triumphing over media darling Hillary.

The broadsheet has been conducting a near-daily post-election jihad against him, largely for the wrong reasons, ignoring the most important right ones.

During the 2016 campaign, the Times virtually operated as Hillary's press agent, a shameful example of advocacy reporting.

The Times: "Since taking office in 2017, President Trump and his administration have sought to remove — and in some cases, destroy — many of the guardrails of precedent and tradition surrounding the conduct of the executive branch."

Fact: They follow in the footsteps of most of his predecessors, notably the Clinton co-presidency, Bush/Cheney and Obama/Biden — regimes hostile to peace, equity, and justice the Times wholeheartedly endorsed.

"What is at stake in all of this is nothing less than our democracy." What doesn't exist isn't at stake. The US is a warmongering fascist police state, masquerading as democratic, a notion the vast majority in Washington abhor — especially ruling authorities of both wings of its war party.

Trump called what's going on "the greatest witch hunt in American history." It's one of the greatest moments of shame since the republic's founding — a politicized scam against a sitting president for illegitimate reasons.

Pro-Hillary/anti-Trump media manipulated a majority of Americans to support what should be strongly denounced and opposed.

Removing him from office by a required two-thirds GOP-controlled Senate super-majority is another matter entirely, what's highly unlikely to happen.

Thursday on the House floor, one Republican after another denounced the politicized witch hunt sham — a coup attempt with no legitimacy by any standard.

Speaker Pelosi and Dem committee chairpersons involved in one of the most shameful chapters in US history should be impeached and removed from office.

"Lock 'em up," and their co-conspirators, for high crimes and misdemeanors against the rule of law.

The anti-Trump character assassin, masquerading as a whistleblower, was ID's as 33-year-old Eric Ciaramella.

According to Real Clear Investigations' Paul Sperry, he's "a CIA analyst who at one point was detailed to the White House and is now back working at the CIA."

He's "a registered (Dem) held over from the Obama White House (who) previously worked with former Vice President Joe Biden and former CIA Director John Brennan, a vocal critic of Trump who helped initiate the Russia 'collusion' (scam) during the 2016 election."

Yet the media, White House and Congress know his identity and what he's up to. He was involved generating the phony "Putin fired (former FBI director James) Comey narrative."

It was part of trying to invent an illegal or improper Trump team/Russia connection that never existed.