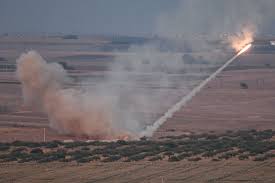 No Ceasefire/Ceasefire in Northern Syria

From one or more illegally established airbases in Syria, as well as other other regional ones, Pentagon warplanes, attack helicopters, and drones continue terror-bombing Syrian sites at the discretion of its commanders.

US troops still occupy large parts of northern and southern Syrian territory indefinitely, including oil producing areas — looting them for private and CIA profiteering, as well as wanting Damascus denied revenues from its own resources. That's what grand theft is all about.

All of the above are war crimes as defined under the UN Charter and other international law. The US and its imperial partners remain unaccountable for crimes of war and against humanity in all their war theaters.

The same goes for US economic terrorism against Iran, Venezuela, North Korea, Cuba, and other countries — high crimes gone unpunished.

An immoral, unethical nation, operating extrajudicially at home and abroad by its own rules to empower and enrich its privileged class at the expense of ordinary people everywhere is what fascist tyranny is all about.

That's the disturbing state of the US, a fantasy democracy threatening everyone everywhere, defined by its arrogance and rage to dominate.

Its war secretary Mark Esper warned that the Pentagon will use "overwhelming force" to maintain control over Syrian oil producing areas, wanting Damascus sovereignty over all its territory as mandated under international law denied.

The Trump regime and Russia OK'd Turkey's cross-border aggression in northern Syria. Begun on October 9, it continues despite an October 18-declared ceasefire.

Sporadic clashes are ongoing in Aleppo, Hasakah, and Raqqa provinces.

On October 31, AMN News reported that "Turkey has failed to abide by its obligations under the Syria ceasefire as it continues military activities in Syria's border areas…"

"Turkey has not adhered to the ceasefire agreement with the USA and is continuing its war. Turkey, with jihadists, began to occupy Christian villages, trying to break into Tall Tamir dominated by Assyrians, and threatened with annihilation."

More broadly, he aims to control oil-rich Iraqi Kurdistan. Deals he cut with the US and Russia conceal his real objectives.

"Meanwhile, the Turkish offensive and its mercenary terrorists targeted with artillery shells locals' houses in the villages of Tal Tamr northern countryside, causing the displacement of a large number of people."

"…Turkish forces occupied al-Mahmoudiya and al-Darbu villages in Ras al-Ayn countryside after targeting them with aerial and artillery bombardments."

Separately, Tass reported that Turkey handed over 18 captured Syrian soldiers to Russian forces. At least two were injured during clashes.

The battle for restoration of Syrian sovereignty and territorial integrity continues because the US hasn't ceased its aim to control the country as a vassal state — wanting Bashar al-Assad toppled, pro-Western puppet rule replacing him.

US aggression remains ongoing in its 9th year with no near-term prospect for restoring peace and stability to all parts of the country.

Millions of long-suffering Syrians are hostage to US, NATO, Turkish aggression — along with Israeli terror-bombing at its discretion, on the phony pretext of combatting an Iranian threat that doesn't exist.

In its latest edition, the Wall Street Journal perpetuated the myth of "civil war" in Syria.

There's nothing "civil" about US aggression in its 9th year — responsible for devastating the country and causing the gravest refugee crisis since WW II.

The Journal also maintained the myth of "US troop withdrawal" from the country — despite knowing Pentagon and CIA occupation of northern and southern areas continues indefinitely with no plans for leaving.

Syrian sovereignty and territorial integrity are inviolable under international law.

Occupation by foreign forces without permission from Damascus is flagrantly illegal — ignored by the Journal.