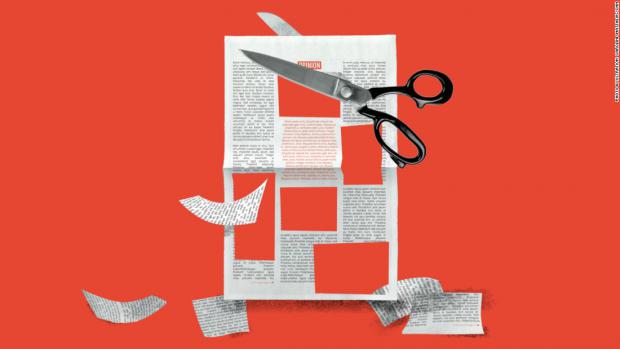 The Times operates as a mouthpiece for the imperial state, Wall Street, and other predatory corporate interests.

On all things related to US wars of aggression for conquest, control and plunder, the self-styled newspaper of record is onboard enthusiastically.

On issues related to democratic values, the rule of law, and public welfare, it's AWOL or militantly hostile.

Bipartisan US hardliners and the NYT consider him a traitor. Times editors called for Russia to extradite him. They want him tried and punished for exposing how the US spies on its own citizens and countless others abroad, including world leaders.

They support mass surveillance instead of forthrightly denouncing what's incompatible with a free society.

They're for police state persecution of anyone challenging US imperial interests and/or exploitation of ordinary people at home and abroad.

They're militantly hostile to Chelsea Manning for exposing US war crimes in Afghanistan and Iraq.

In response to Assange's unacceptable 18-count indictment for the "crime" of truth-telling journalism the Times long ago abandoned, the broadsheet slammed him with a blitzkrieg of Big Lies, saying:

"The charges are the latest twist in a career in which Mr. Assange has morphed from a crusader for radical transparency to fugitive from a Swedish sexual assault investigation (sic), to tool of Russia's election interference (sic), to criminal defendant in the United States."

The above remarks turned truth on its head. Bogus sexual assault charges against him were dropped, then reopened by Sweden following US pressure.

Not a shred of evidence suggests he or Manning operated as "a tool of Russia's election interference" that never happened — one of many Times' Big Lies that won't die.

No Dem emails were "stolen." Leaked by a party insider, WikiLeaks published them, what journalism the way it's supposed to be is all about — what's absent in Times propaganda reports.

Like Snowden, Manning and other whistleblowers, along with truth-telling journalists, Assange is a world-class hero — punished for publishing what US dark forces want concealed.

Charges against Assange "rely almost entirely on conduct that investigative journalists engage in every day. The indictment should be understood as a frontal attack on press freedom."

Attorney Barry Pollack representing Assange said he's charged with a crime "for encouraging sources to provide him truthful information and for publishing that information" — removing the "fig leaf" claim about hacking that never occurred, adding:

"These unprecedented charges demonstrate the gravity of the threat the criminal prosecution of Julian Assange poses to all journalists in their endeavor to inform the public about actions that have been taken by the US government."

Times editors further mocked him, saying: He "is no hero (sic)…There is much to be troubled by (his) methods and motives, which remain murky (sic). He released numerous documents without removing names of confidential sources, putting their lives in jeopardy (sic)."

WikiLeaks refuted the Big Lie by the Times and Justice Department, saying it's "a not-for-profit media organization. Our goal is to bring important news and information to the public," adding:

"We provide an innovative, secure and anonymous way for sources to leak information to our journalists (our electronic drop box)."

"One of our most important activities is to publish original source material alongside our news stories so readers and historians alike can see evidence of the truth."

Anonymous sources are protected, not revealed. "Like other media outlets conducting investigative journalism, we accept (but do not solicit) anonymous sources of information."

"Unlike other outlets, we provide a high security anonymous drop box fortified by cutting-edge cryptographic information technologies. This provides maximum protection to our sources."

The Times is in cahoots with US dark forces wanting Assange, Manning, Snowden, and others like them silenced.

On October 4, the broadsheet shamefully published an op-ed  headlined: "Free Speech is Killing US," attacking what it called "noxious (social media) speech," adding:

"(T)he brutality that germinates on the internet can leap into the world of flesh and blood…Noxious speech…cause(s) tangible harm…(U)nchecked speech can expose us to real risks."

Censorship in the US is the new normal, the Times on board for totalitarian rule, supporting the official narrative, wanting content conflicting with it eliminated.

When truth-telling and dissent are considered threats to national security, free and open societies no longer exist.

Instead of being on the right side of this issue, the Times supports what demands denunciation.