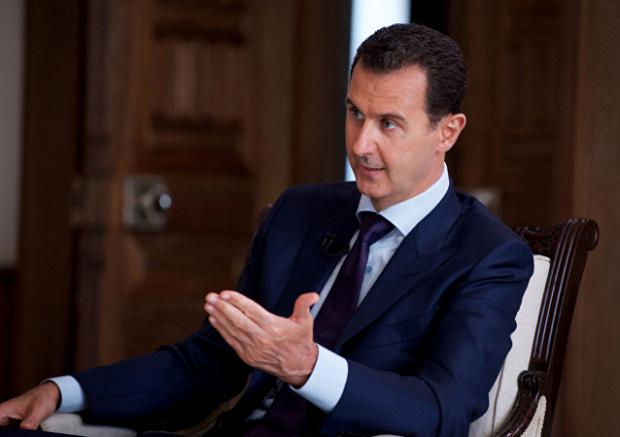 Assad says what he means and means what he says — polar opposite how US, other Western, and Israeli officials operate, time and again duplicitous, never to be believed or trusted.

He heard about Abu Bakr al-Baghdadi's alleged killing through media reports, he said, adding the following:

"We are the ones fighting terrorism" that's supported by the US, NATO, Israel, the Saudis, and their imperial allies, my comment, not Assad's, a reality he clearly understands.

"(W)e do not really know whether the operation did actually take place or not. No aircraft were detected on radar screens. Why were the remains of Baghdadi not shown," he asked?

"This is the same scenario that was followed with Bin Laden. If there are going to use different pretexts in order not to show the remains, let us recall how President Saddam Husain was captured and how the whole operation was shown from A to Z."

"They showed pictures and video clips after they captured him.  The same happened when they killed his sons several months later. They showed the bodies."

"So, why did they hide everything about the Bin Laden operation and now also the Baghdadi operation?"

"This is part of the tricks played by the Americans. That is why we should not believe everything they say unless they come up with evidence. American politicians are actually guilty until proven innocent, not the other way around."

Whether Baghdadi is dead or alive, whether ISIS exists or is eliminated "will have no effect on (the) extremist" ideology it represents that's been around for time immemorial, and exists under various names, Assad explained, adding:

Baghdadi can "replaced at any moment. Was he really killed?Was he killed but through a different method, in a very ordinary way? Was he kidnapped? Was he hidden? Or was he removed and given a facelift?"

Assad stressed that Russian involvement since September 2015 complies with international law, polar opposite how the US, NATO and its imperial allies operate.

Russian airpower and other material support for Syrian sovereignty and territorial integrity greatly aided the liberation of most of the country's territory.

Turkey's cross-border aggression "reflects (its) territorial greed but also expresses the American desire. The Russian relationship with Turkey is positive because it reigns in (its) aspirations."

"On the other hand, it outmaneuvers the American game in the north…and aborted the call for internationalization which was proposed by the Germans."

"That is why this agreement is a positive step.  It does not achieve everything, in the sense that it will not pressure the Turks to leave immediately."

"NATO is the same thing as America," Assad stressed. Erdogan can never be trusted. He breached the Astana process by continuing to support terrorists in northern Syria.

He broke his promise to establish an Idlib deescalation zone. Instead of disarming al-Nusra and likeminded terrorists, he supplied them with more weapons and other material support.

Assad: "In the end, we liberated (Idlib) areas gradually through military operations. The same will apply in the northern region after exhausting all political options."

Like the US, NATO, Israel, and the Saudis, Turkey is Syria's mortal enemy. Erdogan aims to seize and annex as much of its territory as he can get away with, an agenda Moscow opposes and is using diplomacy to prevent.

Like ISIS and likeminded terrorist groups, Turkey operates as an "American proxy in this war, and everywhere we have fought we have been fighting this proxy," Assad explained.

If Syria's liberation can't be achieved diplomatically ahead, "you go to war against" the hostile invader. "There is no other choice," said Assad.

He called Trump "the best American president,  not because his policies are good, but because he is the most transparent president," adding:

"All American presidents perpetrate all kinds of political atrocities and all crimes and yet still win the Nobel Prize and project themselves as defenders of human rights and noble and unique American values, or Western values in general."

"The reality is that they are a group of criminals who represent the interests of American lobbies, i.e. the large oil and arms companies, and others."

Regardless of statements by Trump and other US officials, "the Americans are (illegal) occupiers."

Asked how he'd feel about "shak(ing) hands" with an Erdogan regime official, he said:

"I would not be honored by such a meeting and I would feel disgusted.  But we have to put our personal feelings aside when there is a national interest at stake."

"If a meeting would achieve results, I would say that everything done in the national interest should be done."

"This is the responsibility of the state. I do not expect a meeting to produce any results unless circumstances change for the Turks."

As for possibly meeting with the Israelis, Assad is against dealing with officials wanting Syrian sovereignty eliminated, an apartheid nation hostile to peace, equity and justice, one created by dispossessing indigenous Palestinians — its ruling regime at war with Syria without declaring it.

The lengthy interview covered other issues. He ended it saying:

"(W)e pin our hopes on you in the (Arab) media to be – as you have been – part of the battle against terrorism, against corruption, and against any flaw which might take the country backward instead of moving it forward.