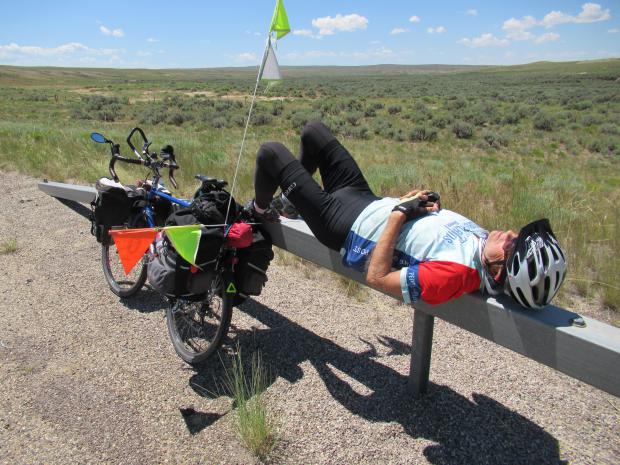 Resting on a guard rail

Marcel Proust said, "Let us be grateful to the people who make us laugh; they are the charming gardeners who make our souls blossom."

During my lifetime of touring around the world, I've met quite a few characters who brought me greater insights, greater wisdom and, a few, brought me hilarious laughter.  You might call them the "Robin Williams', Jeff Foxworthy's, and Larry the Cable Guy" cyclists sent into your life by the bicycling gods.

They tell jokes with a wild and crazy punch line.  They tell stories that spellbind you until they leave you doubled over in laughter.  My life-long friend Archie Visser told about how, on a dare from his buddies, he crawled under an outhouse in the country once with a stick of dynamite.  When he lit the fuse, he got out and started to run with his buddies when it blew, but shit rained down on them from the sky.  I laughed so hard, I almost split cracked my stomach.

"You'll learn, as you get older, that rules are made to be broken. Be bold enough to live life on your terms, and never, ever apologize for it. Go against the grain, refuse to conform, take the road less traveled instead of the well-beaten path. Laugh in the face of adversity, and leap before you look. Dance as though EVERYBODY is watching. March to the beat of your own drummer. And stubbornly refuse to fit in."
? Mandy Hale, The Single Woman: Life, Love and a Dash of Sass

My wife Sandi struts her humor daily in my life.  She causes a smile, a smirk or I double over in laughter. She carries that incredible talent of spontaneous humor.  On bicycle tours, she makes other laugh at campfires across the land.

Another couple of humorists I met while bicycling up the Continental Divide in 2013--Two old Irishmen from north of Dublin, Drogheda, crossed paths with me from Riverside, Colorado on Route 40 to Madison Junction, Yellowstone. They rode coast to coast from Virginia Beach, Virginia to Florence, Oregon.  During that week of riding, I laughed more often and harder than ever before in my life.  Dave Turner and Gerry Mulroy could spin tales, tell jokes and write the perfect memoir on humor.

I must tell you about how they rode across America with one pair of underwear between them to save on weight:  "We mounted our bikes and pedaled along the Firehole River. We saw elk and bison grazing in the rich watershed. Later in the day, we reached Firehole Falls with its bubbling pools,  steaming vents and beautiful designs coloring the runoff.  Nature's artwork captivated like few other sights on the planet at those pools.

"At one point, a road crew stopped us for 10 minutes.  The guy held up a sign. A motorcyclist waited right beside us. Two SUV's rolled up with their windows rolled down with the wives in the passenger front seats.  That's when Gerry told his story about how he and Dave had been wearing the same single pair of underwear pants across the entire United States---to save on washing and weight. The motorcyclist took note, the Stop sign-holder listened hard and the two ladies in the SUV's leaned their ears into the tale.  "Yes, I brought one pair of underwear when we started on the beach in Virginia eight weeks ago,"  said. Gerry.  "Each night, after a shower, I switched the outside in, and next night the inside out.  I did that every day for a week. Then, I threw them over to Dave and he did the same. Wear them all day, and then, turn them inside out and outside in. After two weeks, we followed the usual routine, but then, so as to save the one pair, we turned them front to back and back to front."  By that time the ladies in the cars couldn't stop laughing. The motorcyclist checked his underwear and could not contain himself.

I asked Dave, "What did one of you wear when you weren't wearing the underwear?"

The ladies in the SUV's could hardly contain themselves, they laughed so hard. I about fell off my bike with a cracked face from laughing. The motorcyclist said, "I need a drink!"

The Stop sign holder said, "I got to find a new job."

I told the women in the SUV's, "After a week of this humor, I need special counseling."  They roared with laughter. Finally, the Stop sign-holder let us pass and we pedaled forward.  As usual, Gerry and Dave carried smirks on their faces.  I love those guys!"

"In the sweetness of friendship let there be laughter and sharing of pleasures. For in the dew of little things the heart finds its morning and is refreshed." Khalil Gibran

A huge "thank you" to Dave Turner and Gerry Mulroy for our 10 days together on the Continental Divide in 2013.  You two remain in my heart forever!

FB page: How to Live A Life of Adventure: The Art of Exploring the World

Dancing With the Dolphins in Australia