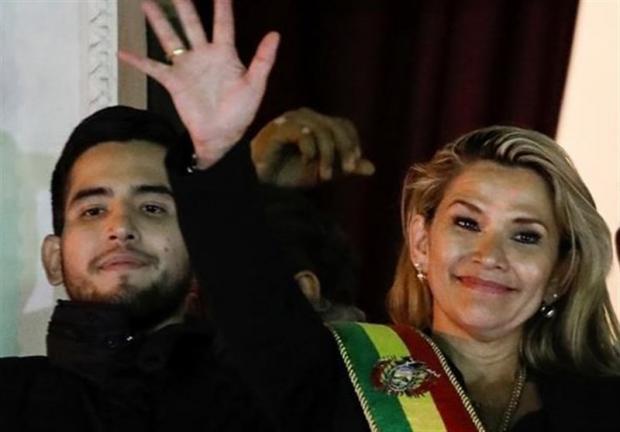 "I assume the presidency immediately and will do everything necessary to pacify the country" — by brute force, she failed to explain.

He stepped down to avoid blood in the streets and possible assassination after the country's military and police sold their souls to US imperial interests for whatever financial and/or other benefits gotten from the CIA.

He denounced Anez's usurpation as illegitimate, saying she acted "without legislative quorum, surrounded by a group of accomplices and supported by the armed forces and the police, which repress the people."

She's Bolivia's US-designated puppet/usurper, similar to Venezuela's Guaido, figures contemptuous of democracy, the rule of law, equity and justice, pseudo-leaders with no legitimacy, traitors to their nations.

They stepped down, likely forced out by internal and external dark forces to avoid assassination, clearing the way for political nobody Anez to seize power — announced before a legislative assembly session boycotted by pro-Morales lawmakers.

She, her co-conspirators, and the OAS falsely claimed Morales' reelection was marred by vote-rigging.

Bolivia's supreme court backed her usurpation as the highest ranking politician in the line of succession left standing.

No one supporting the coup resulting in his resignation has legitimacy, the popular will sabotaged by what happened.

Anez is unlikely to calm Morales' supporters. After her usurpation, members of Morales' Movement for Socialism (MAS) said they intend convening legislatively on Wednesday to nullify her illegitimate self-designation as president.

Following his forced resignation and departure for Mexico, thousands of his supporters took to the streets of the political capital La Paz and other Bolivian cities.

On Tuesday, he urged supporters to challenge Anez's illegitimate usurpation of power.

Bolivia remains in turmoil. The struggle against the CIA-orchestrated fascist power grab continues.

Every Coup Is Followed by a Purge and That Purge Is Arriving This Fall!