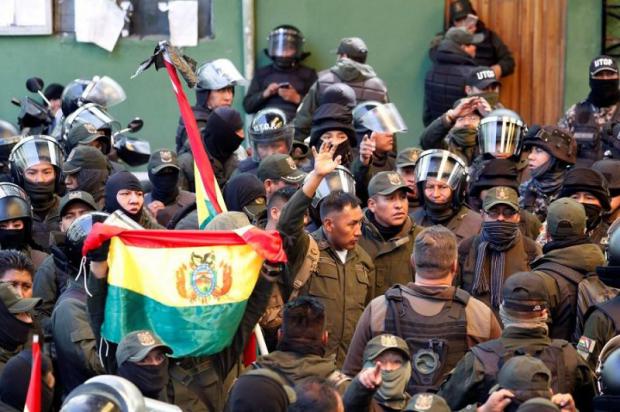 Bolivian Democracy Under Morales v. the Scourge of US Installed Fascist Tyranny

Events leading up to and following Bolivia's October 20 elections were all about a diabolical CIA plot to replace democratic governance under Morales with US installed puppet rule — subservient to its interests and the country's privileged class at the expense of its ordinary people.

A CIA-orchestrated fascist coup, aided by Bolivia's military and police, ended nearly 14 years of stability in the country that didn't exist for most of the previous two centuries, Morales explained on RT Spanish.

"There had never been political calm in Bolivia, with the exception of the time when Andres de Santa Cruz was in power, between 1829 and 1838."

"It was the period of the greatest prosperity for the country. It used to be one of the leaders in the region."

Most of Bolivian history since the 1500s has been defined by colonization, exploitation, repression, turbulence, instability, and dictatorial rule, the country liberated by Simon Bolivar in 1825 — along with Venezuela, Colombia, Ecuador, Peru and Panama.

He defeated the Spanish, liberated much of Latin America, and advocated equity and justice for all.

He triumphed over the scourge of imperialism that "plague(d) Latin America with misery in the name of liberty."

It wasn't to last, US imperial control replaced the Spanish conquistadors after the 1823 Monroe Doctrine warned European countries not to interfere in the Western Hemisphere, saying:

"The American continents…are henceforth not to be considered as subjects for future colonization by any European powers."

"I spent 33 years and four months in active military service, and during that period I spent most of my time as a high-class muscle man for Big Business, for Wall Street and the bankers" – a "gangster" for monied interests.

"…I might have given Al Capone a few hints. The best he could do was to operate his racket in three districts. I operated on three continents."

His book titled "War is a Racket" is a powerful anti-war classic, far more relevant now than when he wrote it in 1935 during the Great Depression and FDR's New Deal era – polar opposite the scourge of neoliberal harshness and endless hot wars and by other means, supported by both right wings of US duopoly governance.

"I remember when I was a soldier in the armed forces in 1978, three presidents changed in one year. All were generals…During the five years before I took office there were five presidents."

"But now a coup has taken place," ending nearly 14 years of democratic rule and stability.

The US-installed fascist regime "burn(ed) the homes of officials down. The police d(id) nothing and then join(ed)" them.

The regime "threaten(ed) the wives of public servants, saying: 'If your husband doesn't leave, we'll burn you alive.' The wives call their husbands in tears and eventually they quit."

Bolivia's military, police, and the Washington-based Organization of American States (OAS) were complicit with the US in toppling Morales.

The CIA-orchestrated coup was all about gaining another imperial trophy, along with control over Bolivia's resources and population.

"We recognize the importance of Bolivia's political transition to democracy in our hemisphere (sic), and we admire the Bolivian people for standing up for their constitution, their democracy, and for free, fair, and transparent elections (sic)."

He denounced nonexistent "egregious irregularities and manipulation of the vote in the flawed October 20 election (sic)," adding:

"We support robust press freedoms and peaceful assembly and protest (sic). Violence, repression, and political intimidation have no place in a democracy (sic)."

"We lied. We cheated. We stole" — Langley's mandate throughout its odious history since 1947, an agency incompatible with peace, stability, democratic values and the rule of law, notions US dark forces reject.

Ukraine a Strategic US Partner Against Russia