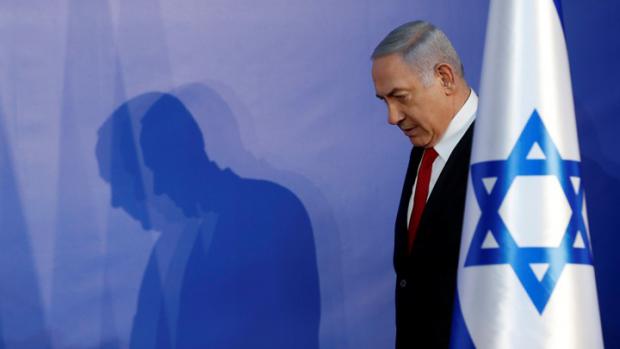 Is Netanyahu's Scourge in Israel Coming to an End?

He faces prosecution for fraud, bribery and breach of trust — hard evidence against him damning.

Not going quietly, he falsely said the following on national television Thursday night:

"You would have to be blind not to see that something bad is happening with the police and the prosecution, because tonight we are witnessing an attempted government coup against the prime minister through blood libels and a biased investigation process (sic)," adding:

The timing of announced charges against him "highlights how much this decision is tainted by extraneous considerations, aiming to bring down a right-wing prime minister (sic)."

He should have been brought down long ago on charges of corruption, high crimes of war and against humanity, along with daily state terror against millions of defenseless Palestinians – far more serious offenses than civil wrongdoing.

Have years of criminality caught up to him? Will he be held accountable on multiple charges? Is his downfall coming? In the new year, will Israelis finally be free from the scourge he represents?

He lied calling charges against him fabricated. He lied saying the investigation process was "tainted."

He lied claiming "(t)his process, which culminated today is appalling." He lied saying I'm not the only one appalled."

He lied claiming "(m)any of Israel's citizens are also appalled, and not only who those who are right-wing."

In April and September Knesset elections, his Likud party won 29% and 27% of the body's seats respectively. Over 70% of Israeli voters supported other parties.

Throughout his political career, Netanyahu time and again blamed Israeli victims for ruling regime high crimes against them.

His public remarks include a litany of bald-faced Big Lies. On Thursday night, he lied accusing attorney general Mendelblit of "extortion."

"He called for "an independent committee to investigate this tactic and put an end to this (sic)," adding:

"It's time to investigate the investigators, and the prosecution that authorizes these tainted investigations (sic)."

"I won't let lies prevail. I will continue leading this country, in accordance with the law, with devotion and seeing to the future and security of all of us (sic)."

"I, as opposed to my rivals on the left, want to see a free market, a range of opinions in the media (sic).

"I am a prime minister who believes in a strong Israel, and not in a weak and small country that bows down to others (sic)."

He's the first prime minister in Israeli history to be charged with bribery, fraud and breach of the public trust.

AG Mendelbit's remarks about him were strong and unequivocal, saying:

He "took advantage of the bribe (offered him with the) understanding that he would…significantly influence legislation" favoring the briber and himself.

He "fundamentally harm(ed) the integrity of the public service and public trust."

He "conveyed the message (that) bribery is an acceptable tool to use in promoting the mutual interests of elected officials and businessmen…This conduct deeply and profoundly harms the rule of law, moral integrity and public trust."

He "and his wife received (lavish) favors" amounting to bribes. He "committed a breach of trust while fundamentally harming public trust, integrity, and the proper administrative procedures while acting subject to a serious and ongoing conflict of interests" in relations with complicit business interests.

His earlier public remark claiming no wrongdoing "because there is nothing" was one of his many Big Lies, things catching up to him after all these years.

When former prime minister Ehud Olmert was being investigated for wrongdoing (later convicted and imprisoned), Netanyahu said the following:

"A prime minister who is up to his neck in investigations does not have a moral and public mandate to decide such fateful things for the State of Israel."

He's now faced with his own moment of truth. Throughout his pockmarked public life, he sought personal gain complicit with Israel's privileged class at the expense of its ordinary people, Arab citizens, and Occupied Palestinians.

"In the choice between the good of the country and his personal good, Netanyahu always chose what was good for him," adding:

"Ever since the beginning of the investigation he has behaved acted like a common criminal, denying wrongdoing, and lashing out at the police and the justice system."

"For the past two years, the entire apparatus of government has been under unprecedented assault."

"This (was a) campaign of destruction conducted by the prime minister of Israel against the state of Israel.

"In the choice between the good of the country and his personal good, Netanyahu always chose what was good for him."

"Ever since the beginning of the investigation he has behaved acted like a common criminal, denying wrongdoing and lashing out at the police and the justice system."

"For the past two years, the entire apparatus of government has been under unprecedented assault."

"This campaign of destruction conducted by the prime minister of Israel against the state of Israel has to stop."

"Netanyahu must" step down, face the music, and be held accountable for years of criminal wrongdoing.

"Our Warplanes Can Reach Iran":