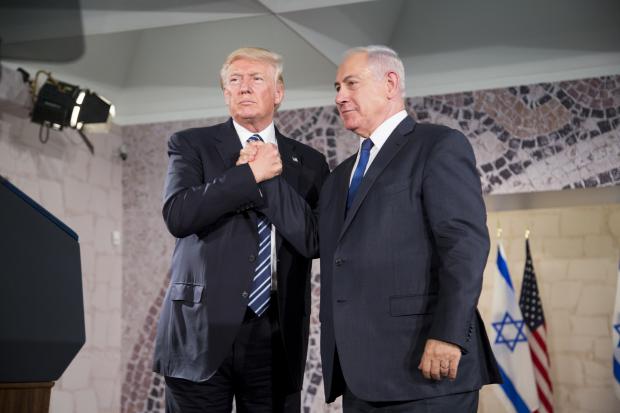 SD: "The United States was the first country to recognize Israel as a state in 1948, and the first to recognize Jerusalem as the capital of Israel in 2017."

Fact: On May 15, 1945, minutes after midnight, Harry Truman became the first world leader to recognize the new Israeli state – created by mass slaughtering and forcibly displacing hundreds of thousands of Palestinians from their homeland.

Secretly he wrote at the time by internal memo: "If the president were to follow (this wrongheaded) advice and if in the elections I were to vote, I would vote against the president."

None of the above information is in the State Department "fact sheet."

Fact: The US Government Accountability Office (GAO) once accused Israel of "conduct(ing) the most aggressive espionage operation against the United States of any US ally."

Fact: The Pentagon earlier accused Israel of "actively engag(ing) in military and industrial espionage in the United States."

Fact: Despite knowledge of extensive Israeli spying in the US, the Justice Department, US intelligence community, Congress, and the executive branch maintain normal relations with the Jewish state — considered both ally and counterintelligence threat.

SD: "Israel has long been, and remains, America's most reliable partner in the Middle East."

Fact: The US and Israel partner in each other's wars of aggression against nations threatening no one.

Fact: Illegal occupation, colonialism, institutionalized racism, and apartheid ruthlessness define Israeli policies — all of the above in flagrant breach of international laws.

SD: "Israel's (1948) founding was preceded by more than 50 years of efforts (sic) to establish a sovereign state as a homeland for the Jewish people."

Fact: Arthur Balfour's 1917 call for establishing a Jewish state on stolen Palestinian land was a high crime against humanity.

Fact: Endless conflict, occupation, dispossession, and repression, along with social and cultural fragmentation define conditions for beleaguered Palestinians – over 100 years of suffering, no end of it in prospect, the world community dismissive of their fundamental rights.

SD: "The United States is committed to supporting the parties in efforts to reach a lasting, comprehensive peace agreement that offers a brighter future to both Israel and the Palestinians."

Fact: The US and Israel are committed to endless conflicts and instability — ruling regimes of both countries hostile to Palestinian rights.

Fact: Along with the US global war OF terror, not on it, the no-peace/peace process is the greatest hoax in modern times — rejected by ruling authorities in Washington and Tel Aviv.

SD: "The US-Israel bilateral relationship is strong, anchored by over $3 billion in Foreign Military Financing annually."

Fact: The US gives Israel around $4 billion or more annually in largely military aid — for persecuting Palestinians and cross-border aggression.

Fact: The US 1961 Foreign Assistance Act prohibits aiding governments engaged "in a consistent pattern of gross violations of internationally recognized human rights, including torture or cruel, inhuman, or degrading treatment or punishment, prolonged detention without charges, causing the disappearance of persons by the abduction and clandestine detention of those persons, or other flagrant denial of the right to life, liberty, and the security of person, unless such assistance will directly benefit the needy people in such country."

Fact: Israel's only enemies are invented. No real ones exist. So how do Republicans and undemocratic Dems justify what's unjustifiable? Why is Israel given $11 million dollars or more of US taxpayer money DAILY.

Fact: US relations with Israel, the Saudis, Egypt, Colombia, and other flagrant human rights abusers override observance of international, constitutional, and US statute laws.

Fact: Both countries operate by their own rules exclusively. They long ago abandoned the rule of law. They're fantasy democracies, never the real thing from inception.

SD: Trump "recognized Jerusalem as the capital of Israel on December 6, 2017, and the U.S. Embassy to Israel moved from Tel Aviv to an interim facility in Jerusalem on May 14, 2018."

Fact: Jerusalem is a UN designated international city, the legal capital of none.

Fact: Security Council Res. 476 (June 1980) states: "(A)ll  legislative and administrative measures and actions taken by Israel, the occupying Power, which purport to alter the character and status of the Holy City of Jerusalem have no legal validity and constitute a flagrant (Fourth Geneva) violation."

Israel claiming the city, "complete and united, as (its) capital" has no legal standing. East Jerusalem is illegally occupied territory.

Fact: The US and Israel ignore Security Council resolutions and other international laws unaccountably.