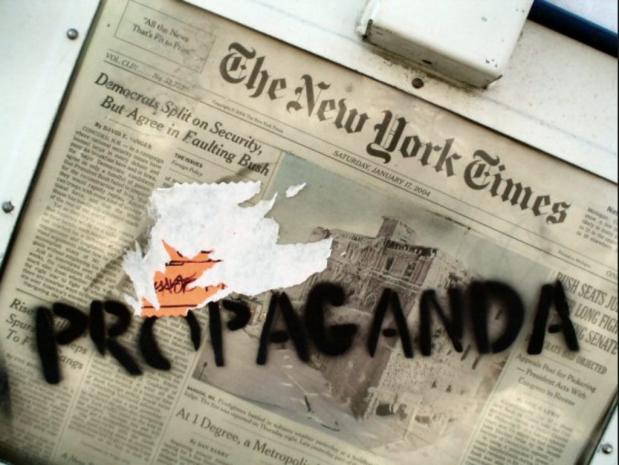 Its disreporting on years of US aggression in Syria is some of the worst in memory, a new report continuing its disinformation campaign to keep readers in the dark about what's going on.

Readers of my work know ISIS was a US creation, its fighters recruited, armed, funded, and directed by their Pentagon and CIA handlers. The same goes for other jihadists in Syria and elsewhere.

They're deployed to areas in nations where the US war machine wants them used as imperial foot soldiers — supported by Pentagon terror-bombing and special forces on the ground directing them.

US forces illegally occupy large parts of northern and southern Syria, including most of the country's oil producing areas.

Pentagon troops in northern Syria weren't withdrawn. They were redeployed to new areas, unknown numbers there, likely thousands, along with hundreds of UK and French special forces.

Times disinformation reports reinvented war in Syria, airbrushing out US-led NATO/Israeli aggression against a sovereign state threatening no one.

In the same edition, Times editors falsely claimed months of CIA-orchestrated violence, vandalism and chaos in Hong Kong "are not a foreign plot" — a bald-faced Big Lie.

The Times and other establishment media have been complicit with the color revolution attempt by supporting what's been all about destabilizing China through its soft underbelly on the pretext of supporting democracy — a notion the vast major in Washington, the Times, and other major media abhor.

Complicity also applies to media support for US aggression in multiple theaters that's all about wanting sovereign independent nations transformed into US vassal states, their resources looted, their people exploited as serfs.

Virtually everything readers need to know about Ukrainegate, a Russiagate spinoff by undemocratic Dems, is omitted in reports by the Times and other major media.

The diabolical plot is all about wanting Trump delegitimized and weakened for the wrong reasons, ignoring the right ones — to give Dems a political advantage in November 2020 elections.

According to Times disinformation, "Trump orchestrated a scheme with "veiled threats (in dealings with Ukrainian President Zelensky to withhold) "a White House meeting and hundreds of millions of dollars in military aid…"

Discussions by Trump and his team with Zelensky were like how all US presidents deal with foreign officials. They're all about serving imperial state interests.

Reports by the Times and other establishment media ignore what US military aid to Ukraine goes for — a client state established by the Obama regime's coup, replacing democratic governance with Nazi-infested putschist rule.

The US FY 2019 National Defense Authorization Act (NDAA) includes $250 million in military aid for Ukraine to wage war on its own people in Donbass, homeland repression, and targeting Russia.

US and UK special forces are involved in training Ukraine's military for endless aggression.

The so-called Ukraine Freedom Support Act (UFSA) of 2014 authorized US lethal and non-lethal aid to Kiev.

A state of US orchestrated war has existed in Ukraine since spring 2014 between Pentagon/CIA armed, trained, and directed Ukrainian forces and Donbass freedom fighters — breaking from Kiev over wanting democratic governance over illegitimate (US controlled) fascist rule.

What the Times and other major media suppress is most important to report.

Complicit with corrupt Ukrainian officials, there were "almost a billion hryvnia losses to the (country's) budget" — around $42 million.

"(F)ormer US Vice President Joe Biden and his son Robert Hunter Biden were involved in this scandal," adding:

"Joe Biden received more than $900,000, while his son (and) partners (got) over $16.5 million for" involvement with Ukrainian gas company Burisma.

Ukrainian MP Alexander Dubinsky reported the scheme, a criminal investigation initiated in Ukraine into dubious dealings of the Bidens with Burisma, saying:

"The son of Vice-President Joe Biden was receiving payment for his 'services' with money raised through criminal means and money laundering," adding:

"Biden received money that did not come from (Bursima's) operations but rather from money stolen from citizens."

Last week, the Washington Examiner reported that a "Hunter Biden-linked company received $130 million in special federal bailout loans while Joe Biden was vice president…rout(ing) profits through a subsidiary in the Cayman Islands, according to federal banking and corporate records reviewed by the" broadsheet, adding:

"Rosemont Capital, an investment firm at the center of Hunter Biden's much-scrutinized financial network, was one of the companies approved to participate in the 2009 federal loan program known as the Term Asset-Backed Securities Loan Facility, or TALF."

According to former Troubled Asset Relief Program (TARP) administrator Neil Barofsky, as much as $23.7 trillion went for bailouts — the greatest of grand theft.

All of the above shenanigans by Joe and Hunter Biden have been ignored by the Times and other establishment media.

The former vice president's political record is all about dirty politics as usual — pockmarked with war crimes, double-dealings, racism, deep-seated corruption, and support for monied interests at the expense of the public welfare.

There's virtually nothing redeeming about Trump's near-three years in office.

His disturbing record pales in comparison to Biden's near-half century of shilling for dark forces and other powerful interests as a US senator and vice president.

Along the way, he self-enriched himself and family members for "services" rendered at the expense of world peace, equity, justice, and the rule of law.

On issues mattering most, the Times supports and reports nothing about US dirty business as usual that just societies abhor.

Has The Mainstream Media Finally Turned Against Bill Gates?