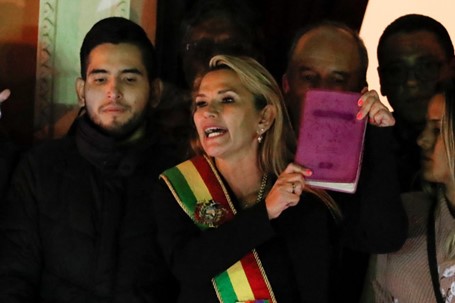 The US-installed coup d'etat regime is going all out to solidify dictatorial power.

Top priorities are eliminating challenges to its tyrannical rule and silencing dissent.

An Interpol notice surfaced against Evo Morales. The coup d'etat regime and US want him prevented from returning to Bolivia. They want him eliminated.

Bogus charges against him include sedition, terrorism, criminal association, and supporting popular opposition to the coup d'etat regime.

On Wednesday, he tweeted: "The coup wasn't against Evo but to the entire country. They want to dismantle the Plurinational State, a reference of unity for the peoples of the world. Fascism does not accept the diversity of cultures and thought. But together we will know how to get up."

On Tuesday, he said "the struggle does not end" with a coup against democratic rule, adding that fascist usurpers want to dismantle "what we have built for economic liberation."

A medical worker involved in treating wounded victims of military gunfire was arrested on charges of terrorism.

Bolivian journalists were threatened to report the official narrative or risk arrest and imprisonment.

Independent media are being shut down, including RT Spanish. From Moscow, RT International said its broadcasts in Bolivia "will be terminated starting next week, the country's leading private TV operator has announced without a prior notice or clear explanation, citing only orders from its administration," adding:

Effective December 2, RT is banned in Bolivia — clearly on orders by the US installed regime. Anyone considered disloyal risks its wrath.

"What constitutional freedom can be there if journalists are not allowed to do their job, to inform and tell the truth?"

On November 25, Trump regime executive order 13851 declared a nonexistent "unusual and extraordinary threat to the national security and foreign policy of the United States constituted by the situation in Nicaragua."

Will the regime try toppling democratically elected Daniel Ortega after installing fascist tyranny in Bolivia — despite failure of a CIA-orchestrated violent attempt to remove him last year?

The White House falsely accused him of "dismantling and undermining democratic institutions and the rule of law… us(ing) indiscriminate violence and repressive tactics against civilians, as well as corruption leading to the destabilization of Nicaragua's economy…pos(ing) an unusual and extraordinary threat to the national security and foreign policy of the United States."

Have Nicaraguan military and police officials been bribed by the CIA like their Bolivian counterparts?

Are more CIA-orchestrated violence, vandalism and chaos coming? Are further eruptions of these actions planned for Venezuela?

Is Mexico's President Andres Manuel Lopez Obrador's government on the CIA hit list? He warned of a right-wing coup against his rule after announcing the end to "the long night of neoliberalism."

Is calling Obrador's government a threat to US national security coming next as a pretext for military intervention?

All sovereign independent governments unwilling to sell their souls to Washington for the right price are on its hit list for regime change.

The US Voice of America propaganda operation said the White House "prioriti(zes) put(ting) (greater) diplomatic and economic pressure on" Venezuela, Cuba and Nicaragua for "regime change."

Are escalated US actions against their ruling authorities coming, an attempt to replace them with pro-Western puppet rule?

Are Venezuela, Cuba, Nicaragua and Mexico next?

Every Coup Is Followed by a Purge and That Purge Is Arriving This Fall!