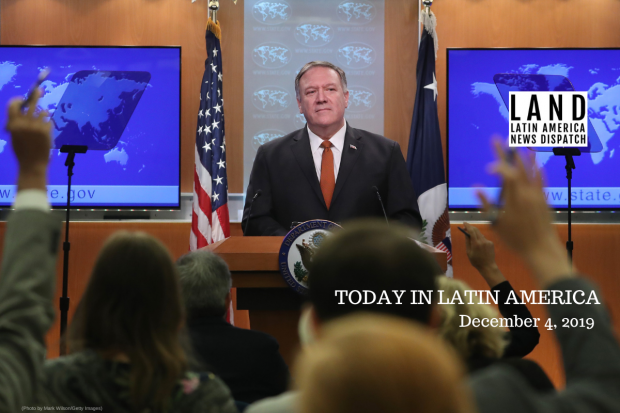 Reportedly he has 2024 presidential ambitions in mind. The possibility of him as US president should terrify everyone.

Last spring, Vanity Fair said he has "ambition beyond being such a pathetic secretary of state. As the world burns and Trump unravels, (he's) acting a lot like a guy running for president," adding:

"With trips to Iowa, Kansas, and Texas, (he's) raising questions about his next act. Is he sketching out a plan for 2024—or positioning himself, should Trump get indicted, for 2020?"

According to the Washington Examiner in late July, he's "open to running for president after his boss leaves office, (he) confirmed."

Claiming at the time that a Kansas Senate run is "off the table," he added: "I always leave open the possibility that something will change and my path in life will change too…"

At the same time, Politico reported that he's open to a Kansas Senate run, saying he and his wife are "thinking about it."

Politico: "Confidants of the secretary (said he's) wrestling with whether to stay in the White House…or run for the Senate."

He's Majority Leader Mitch McConnell's "first choice" for the seat. With the filing deadline next June, he's got lots of time to decide.

"If he leaves as secretary of state to run for Senate, he is effectively abandoning ship."

Others disagree. Appointed officials come and go in Washington. Pompeo has been part of the Trump regime as CIA director and secretary of state from inception.

McClatchy: "Pompeo's consideration of the Senate candidacy has been a long-running, open secret."

"The secretary has repeatedly traveled to Kansas this past year, and multiple sources have confirmed that he met with likely supporters, including Charles Koch and donors affiliated with" AIPAC.

With polls showing the country evenly divided on the sham Trump impeachment inquiry going nowhere, Pompeo's involvement won't likely hurt him if he runs for a Kansas Senate seat.

At the University of Louisville on Monday, he recited a litany of bald-faced Big Lies about US ties to hard-right Latin American regimes and legitimate governments the US is going all-out to topple.

He falsely claimed "restraint" and "respect" are central to US foreign policy, ignoring its rage for dominion over planet earth, its resources and populations — naked aggression, economic terrorism, and other hostile actions its favored strategies.

He praised OAS and Lima Group US vassal state members for "helping the Venezuelan people move towards achieving their desire for freedom, liberty, and to simply take care of their own families (sic)" — ignoring Trump regime economic terrorism on the region's model democracy, wanting it crushed and its resources pillaged by Big Oil and other US corporate predators.

He called democrats Maduro and Morales "dictators." He lied claiming "Cuba…tried to hijack legitimate democratic protests in its country and in the region (sic)."

He lied saying "they traffic to generate income for the Cuban leadership" and receive a percentage of the amount.

They "saved more lives in the Third World than all the wealthy G-8 nations combined, plus the World Health Organization and the Nobel Peace Prize recipient Doctors Without Borders."

According to Cuba expert John Lee Anderson: "At any given time, there are an estimated 50,000 Cuban doctors working in slums and rural areas in as many as 30 other developing nations around the world."

Unlike the US and other Western countries, Cuba considers healthcare a fundamental human right.

"Cuba has shown its solidarity to us by sending 'troops' (meaning doctors) who save lives — not like other countries which send troops (soldiers) to end lives."

A Cuban doctor in Venezuela said: "We Cuban doctors devote everything to love and solidarity because that's what we've been taught since we were little in school" — a founding principle of Fidel Castro's-led 1959 revolution.

Pompeo's notion of democracy building is all about eliminating it wherever it exists.

A profile in arrogance, extremism and thuggishness, he's hellbent for fascist tyranny (he loves) replacing governance of, by and for everyone equitably (he deplores) everywhere.