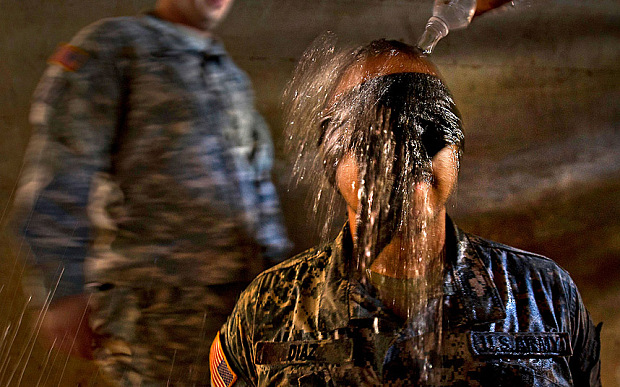 Report on How the US Tortures

Torture is longstanding US policy, notably by the CIA and its henchmen.

In his book titled "A Question of Torture: CIA Interrogation from the Cold War to the War on Terror," Alfred McCoy discussed a half-century of Langley efforts to develop torture techniques – no matter how heinous, immoral, illegal, or ineffective.

It's well known that victims in severe pain say whatever interrogators want to hear to stop it.

The UN Convention against Torture is clear and unequivocal — banning the practice at all times, under all conditions, with no allowed exceptions.

The US Constitution's 8th Amendment bans "cruel and unusual punishments" — clearly what torture is all about.

Seton Hall University School of Law's Center for Policy and Research's report on "How America Tortures" documents the lawless practice by the US — prepared under the direction of Law Professor Mark Denbeaux.

He's "one of Seton Hall's most senior faculty members…the Director of the Seton Hall Law School Center for Policy and Research…best known for its dissemination of the internationally recognized series of reports on (US torture and abuse at) the Guantanamo Bay" torture prison, still operating with no intention of closing it.

Information was provided by US victims, including Abu Zubaydah, a falsely accused al-Qaeda member, an individual with no involvement in or pre-knowledge of 9/11 events — the mother of all US false flags, wrongfully blamed on bin Laden and "crazed Arabs."

Abducted in March 2002, unlawfully held at Guantanamo to this day uncharged and untried, Zubaydah and others endured sleep deprivation, waterboarding, painful stress positions, prolonged isolation, sensory deprivation and/or overload, severe beatings, electric shocks, induced hypothermia, and other measures that can cause irreversible physical and psychological harm, including psychoses.

He was confined in a box "so small (that) he had to double up his limbs in the fetal position" and stay that way, according to the ICRC.

He was also shackled naked by his wrists over his head so his toes barely touched the floor. Hooded and painfully handcuffed, his head was smashed against a wall — torture methods used against him depicted in drawings.

According to Seton Hall's report, "virtually no attention has been paid to the specific details of the techniques that were used in America's name and too little investigation has gone into the specific uses that the CIA made of these techniques," adding:

"This report presents the specific details of what the torture memos permitted and most importantly, how the techniques were implemented and applied."

In an accompanying press release, Denbaugh said the following:

"In many ways…illustrations of Abu Zubaydah are a testament to the triumph of the human will."

"He was subjected to treatment so egregious that the CIA sought and received official governmental assurances that their prisoner would 'remain in isolation and incommunicado for the remainder of his life.' "

"The CIA even arranged for his cremation in the event he died, assuring what they hoped would be his silence even beyond the grave. But with this report, he is silent no more."

According to Seton Hall Law Center for Policy & Research Fellow Niki Waters, one of the report's co-authors:

"What was officially approved was bad enough, but what we found was worse," adding:

"The lack of clarity and seemingly purposeful ambiguity in defining what was allowed and what was not allowed during interrogations led to gross abuse."

"The government failed to account for persistent and unapproved techniques alongside those that were approved. But willful blindness isn't really much of a defense, is it?"

A week after 9/11, congressional Authorization for Use of Military Force (AUMF) declared open-ended war on invented enemies – on the phony pretext of combating forces "responsible for the recent attacks launched against the United States" — legitimizing illegal naked aggression, smashing one nonbelligerent nation after another.

Bush/Cheney's Military Order Number 1 let the regime usurp authority to capture, kidnap or otherwise arrest and indefinitely hold non-citizens (later citizens as well) at home or abroad, uncharged and untried, if accused of involvement in international terrorism – denying them due process and judicial fairness.

Trump continues what his predecessors began, waging endless wars of aggression and by other means, along with other hostile actions at home and abroad.

State-sponsored 9/11 and its aftermath made the US and other Western societies unsafe and unfit to live in. Full-blown tyranny may be another major false flag away.

US rage for unchallenged dominance makes nuclear war against manufactured enemies by accident of design an ominous possibility.

Both right wings of the US war party threaten everyone everywhere.

Trashing the Laws of War - Again