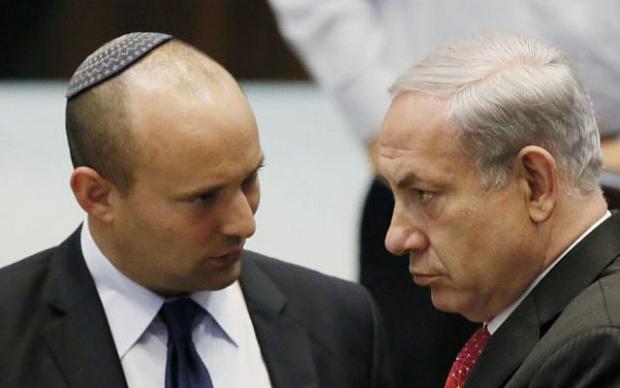 Israeli ruling authorities are the most extremist in Jewish state history.

In early November, Netanyahu appointed him war minister, giving up the portfolio he held, a way for the embattled prime minister to buy Bennett's loyalty, the move unrelated to security issues at a time Israel's only foreign threats are invented. No real ones exist.

At the time, Haaretz said Netanyahu and Bennett struck "a cynical bargain" even for Israel's extreme politics, a move the PM hoped would aid his political survival.

Bennett represents settler interests. The son of US immigrants, he's one of Israel's super-rich class.

Bennett earlier encouraged settlers to shoot Palestinians, saying "(a)gainst the cowardly Arab terrorism, a wave of Jewish courage is rising to defeat it."

He bragged about "kill(ing) lots of Arabs in my life (during military service). There's no problem with that," he stressed.

Earlier he said "(t)he time has come to say Israel is ours to go from strategic defense to a process of initiating the implementation of Israeli sovereignty over the territories under Israeli control in Judea and Samaria," adding:

"We need to mark this as a strategic objective and stop the misunderstood message sent from Israel abroad."

"The approach that I'm promoting is reasonable, sane. In the Middle East, we don't have the luxury to indulge in fantasy."

Seeing no prospect of Israeli/Palestinian peace, he called for "realism" on what's achievable – regardless of world opinion, international law and fundamental Palestinian rights.

In an earlier NYT op-ed, he said the following:

"(A) Palestinian state, if established, would be taken over by ISIS, Hamas and Islamic Jihad (as) a launching pad for attacks against our citizens…It is a risk Israel cannot take (sic)."

Over the weekend he threatened Iran, saying:

"We are telling the Iranians: Syria will become your Vietnam. If you don't leave, you will become entrenched and you will bleed because we will work without hesitation to remove aggressive forces from Syria (sic)," adding:

"We need to move from containment to attack."

His remark followed Israel's latest preemptive airstrike on Syrian targets near the Iraqi border on Saturday, an area struck many times before.

"We will not allow Iran to acquire or stockpile nuclear weapons" it doesn't have or seek in stark contrast to nuclear armed and dangerous Israel.

"If that is the last option, we will act militarily. The threat of sanctions is not enough. The only deterrent is a military threat directed against" Tehran, said Katz.

The myth of an Iranian nuclear or other threat is a longstanding canard. Left unexplained is that Iran hasn't attacked another country in centuries.

It threatens none now except in self-defense if attacked, it legal right under binding international law the US, NATO, Israel, and their imperial allies breach time and again with impunity.

Netanyahu and Gantz Meeting with Trump Separately at White House

Putin in Israel: No Place for a World Leader or Anyone Else