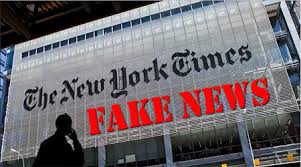 It lied about nonexistent "Russian aggression" and annexation of Crimea while ignoring the Obama regime's coup against a sovereign state, praising the lawless action.

No cross-border Russian military force was authorized or used, no "seiz(ure)" of Crimea.

When the US coup occurred, winter olympic games were ongoing in Sochi, Russia. Its military forces were mobilized for security reasons — to protect against possible terrorist attacks, for defense of the nation, not cross-border aggression as the Times falsely claimed.

No "Russian occupation forces" existed then or now. No 2014 revolution occurred.

In the run-up to and aftermath of the US coup, Times disinformation, Big Lies, and fake news sank to a new low — matched and exceeded in reinventing US aggression in Syria, along with demonizing Trump for the wrong reasons, ignoring legitimate ones.

The Times wholeheartedly supports virtually all despotic regimes that are subservient to US interests.

It's hostile to sovereign independent states unwilling to sell their souls to a higher power in Washington for the right price.

Time and again, it blames victims for US high crimes against them. On all things Russia, it's militantly hostile.

It "continues to keep the Ukrainian territory it seized in 2014 (sic), and Ukraine's…President Zelensky showed he can't easily be pressured into surrender (sic)."

"(T)he intransigence of…Putin…left a just and lasting peace in Ukraine not an inch closer."

Fact: Among world leaders, Putin is the leading supporter of peace and stability — his agenda polar opposite rage for endless wars by US-dominated NATO, Israel, and their rogue allies.

Fact: The Obama regime orchestrated Ukraine's war without mercy in Donbass, supplying weapons, training and related aid, continued by Trump hardliners, ongoing for five and a half years.

Fact: Resolution isn't in sight because both right wings of the US war party reject restoration of peace and stability in all its war theaters and others they support.

Fact: Zelensky is a weak political neophyte leader. Ukraine is a US vassal state, the country infested with fascist hardliners.

Fact: Restoration of peace in Ukraine and normalizing relations with Moscow are off the table because Republicans and undemocratic Dems demand endless conflicts. Peace and stability defeat their hegemonic aims.

The Times: "Since 2014, Ukraine has had to endure the occupation of its southeastern Luhansk and Donetsk regions (sic) by ragtag paramilitary bands (sic) armed, equipped and controlled by the Kremlin (sic)."

Fact: The Donbass People's Republics of Donetsk and Lugansk reject Ukraine's tyrannical rule. They broke away to establish democratic governance they won't relinquish to the illegitimate US-installed Kiev regime.

Zelensky is more figurehead than strong leader. Saying he's uncertain about how to enforce ceasefire in Donbass shows his limited power.

He won't meet with Donetsk and Lugansk leaders. As long as he yields to US and internal pressure not to engage in responsible conflict resolution talks, and pushes other unacceptable demands, endless war will continue.

If he does the right thing by pursuing diplomacy over confrontation and conflict, hardliners in Washington and Kiev may replace him with more subservient figurehead rule.

It repeated the long ago debunked Big Lie about MH17's downing — what Russia and Donbass had nothing to do with.

It lied accusing Putin of "reinvent(ing) himself as a wartime president," adding

"(W)artime presidents never quit. They need wars, victories and conquests, along with an easily manipulated population."

The above describes Washington's permanent war agenda since falsely blaming North Korea for US aggression, begun in June 1950, an uneasy armistice persisting to this day — nonbelligerent Pyongyang considered a mortal enemy.

The Times is a mouthpiece for wealth, power and privileged interests, a lying machine hostile to peace, equity and justice for all.