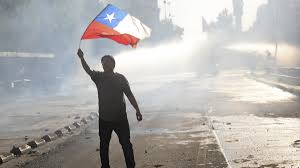 They demand and deserve better wages, education, healthcare, and pension reforms, along with a new constitution, stressing equity and justice for all Chileans.

Since mid-October, they've been protesting for social justice long denied them. Pinera deployed military forces against them for the first time since Pinochet replaced Salvador Allende's social democracy by a US-supported coup d'etat.

It accused the Pinera regime of "torture, ill-treatment, rape and other forms of sexual violence by the police against people held in detention, many of whom appear to have been detained arbitrarily" — more than 28,000 over the past two months, more arrests daily.

In November for weeks, UN Human Rights Office representatives met with "over 300 members of civil society."

The team carried out 235 interviews with victims of human rights violations, including injured and detained protestors and their family members.

They conducted dozens of interviews with police officers, including some injured during protests.

It called a number of fatalities the "arbitrary deprivation of life and other unlawful deaths involving State agents" against unarmed civilians because of indiscriminate use of "lethal force," including "live fire in the absence of any risk to the lives of civilian or military personnel and against people who were not participating in acts of violence."

There has been "unnecessary and disproportionate use of less-lethal weapons, in particular anti-riot shotguns, during peaceful demonstrations and/or outside the context of violent confrontations between demonstrators and security forces."

"This has resulted in a high number of people being injured, including passers-by and people who were not committing violent acts but just protesting peacefully."

"The alarmingly high number of persons with injuries to their eyes or faces (approximately 350) provides a strong basis to believe that 'less-lethal weapons' have been used improperly and indiscriminately, against international principles on minimizing the risk of injury."

Serious injuries causing partial or total blindness in one or both eyes was because of indiscriminate use of shotgun pellets, tear gas and tear gas canisters fired at point blank range, along with other chemical irritants used.

Chilean authorities ordered violence instead of prohibiting it.

The UN human rights team called for an "immediately end (to) the indiscriminate use of anti-riot shotguns to control demonstrations."

It said "the majority of those who have exercised the right to assembly during this period have done so in a peaceful manner" — violence largely state-sponsored.

"There are reasonable grounds to believe that, from 18 October onwards, a high number of serious human rights violations have been committed," it stressed, adding:

"The management of assemblies by the police has been carried out in a fundamentally repressive manner" — notably against unarmed peaceful protesters threatening no one.

In response to the UN report, the Pinera regime, a fascist police state, falsely claimed "the term 'extrajudicial executions' does not apply in a country where the rule of law operates fully (sic)," adding: "95% of all detentions made since October 18 have been declared legal by the (rubber-stamp) courts of justice."

Ongoing protests ongoing in Chile, France, Lebanon, Haiti, Iraq, Algeria, Occupied Palestine and elsewhere are all about demands for equity and justice against repressive regimes.