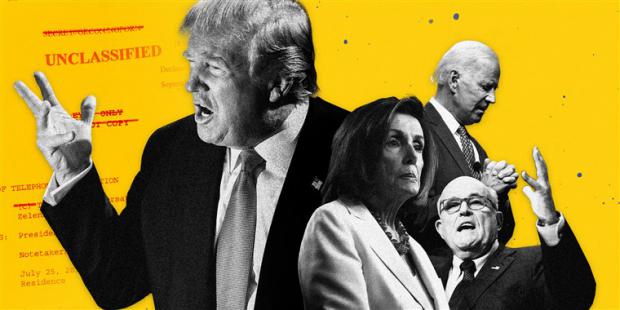 Most US establishment media call for impeaching Trump — for the wrong reasons, ignoring real impeachable offenses.

Like most of his predecessors and vast majority of congressional members, past and present, along with a legion of current and former high-level and other apparatchiks, Trump is guilty of crimes of war and against humanity, of serving monied interests exclusively, and flagrantly betraying the public trust.

He breached virtually every positive pledge made. In his inaugural address, he falsely said the following:

Up to now, there's been "little to celebrate for struggling families all across our land."

"That all changes – starting right here, and right now, because this moment is your moment. It belongs to you."

"January 20th 2017, will be remembered as the day the people became the rulers of this nation again."

"The forgotten men and women of our country will be forgotten no longer…The oath of office I take today is an oath of allegiance to all Americans."

"I will fight for you (ordinary Americans) with every breath in my body – and I will never, ever let you down."

All of the above was and remains BS rubbish. In nearly three years in office, he handed trillions of dollars to Wall Street, the military, industrial, security complex, Big Oil, Big Pharma, and other corporate predators — at the expense of ordinary Americans he betrayed.

His colossal tax cut heist was and remains all about a massive wealth transfer to corporate America and high-net worth households — wanting Medicare, Medicaid, Social Security, and other social programs slashed to pay for it.

Social justice is on the chopping block for slow-motion elimination, a longtime GOP goal supported by hardline/neoliberal undemocratic Dems.

Throughout his campaign and post-election, the NYT waged editorial war on Trump. Its latest edition screamed: "Impeach."

Its editors never forgave him for triumphing over media darling Hillary. On election day 2017, it said she "has an 85% chance to win," adding:

Her "chance of losing is about the same as the probability that an NFL kicker misses a 37-yard field goal."

A supposed sure thing didn't turn out that way. The Times never forgot or forgave. It's waged near-daily war to demonize Trump, largely for the wrong reasons, the most important right ones ignored because the broadsheet supports them.

The Times: Trump "abused the power of his office by strong-arming Ukraine, a vulnerable ally, holding up hundreds of millions of dollars in military aid until it agreed to help him influence the 2020 election…"

The Times: Trump "show(ed) 'unprecedented, categorical and indiscriminate defiance' in the face of multiple subpoenas (sic)."

"He made it impossible for Congress to carry out fully its constitutionally mandated oversight role, and, in doing so, he violated the separation of powers, a safeguard of the American republic (sic)."

The impeachment process by undemocratic Dems is a colossal scam, one of the most disturbing political spectacles in US history, modern-day McCarthyism no one should support.

No credible evidence presented backs it, no legitimate constitutional grounds, no quid pro quo as falsely claimed, no bribery or other criminal act, no obstruction of justice.

No US president was ever impeached for non-criminal actions or phony abuse of power claims.

Time and again, US presidents push foreign leaders to serve US interests. By that standard, virtually all Trump's predecessors should have been impeached and removed from office.

What's going on to continue in the new year is all about an attempt by Dems to gain a political advantage in 2020 elections — a scam that may backfire and hand Trump a second term, perhaps giving the GOP a chance to control both houses.

On all things Trump and most other major domestic and geopolitical issues, the Times abandoned journalism for advocacy, operating as a mouthpiece for powerful interests.

The same goes for other establishment media, featuring managed news misinformation and disinformation exclusively over journalism the way it's supposed to be.

Its latest edition discussed what it called "a growing roster of national and regional newspapers that" support impeachment, naming the following ones:

"(G)rounds (by Dems) for ousting Trump are weak—and damaging to constitutional norms," adding:

"After all the talk of obstruction of justice, collusion with Russia, bribery, extortion, profiting from the presidency, and more, House (Dems settled for) abuse of power and obstruction of Congress. Honey, we shrunk the impeachment" — to illegitimacy.

New polls show most Americans oppose impeachment. Give credit less to their understanding of the facts, more to failure by Dems to present a credible case.

Months of anti-Trump huffing and puffing by Dems and supportive media laid an egg.

According to the Arizona Republic's editorial director Phil Boaz, Dems "will impeach."

"The Republican Senate will acquit. And then we'll have an election. The rest is all posturing."

US voters will have the last word next November.

In office, he escalated wars he inherited, handed trillions of dollars to monied interests, supporting dirty business as usual throughout his tenure.

Why would beneficiaries of his agenda want him removed? They don't.

Dems and supportive media want him ousted for winning an election he was supposed to lose.

Pre-election, power brokers were likely divided. Hillary may have lost because a majority of their numbers decided she was damaged goods, too contentious to lead.

Polls showed most voters disliked both candidates. Most likely a deal was struck with Trump to continue dirty business as usual. He didn't disappoint.

Dems and supportive media want revenge because their candidate lost — Hillary snatching defeat from the jaws of victory.

That's what the impeachment scam is all about, its outcome to unfold in the new year.