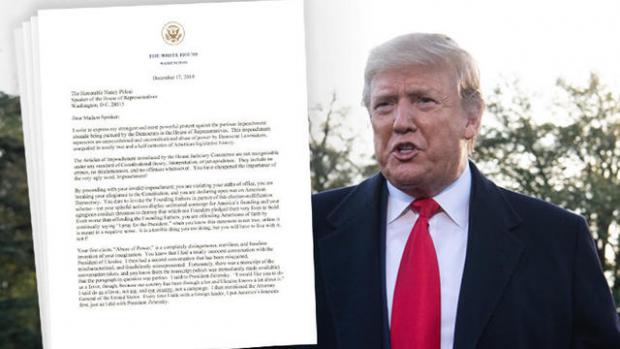 Despite disinformation in the White House letter written for him he signed, it correctly slams the ongoing politicized "crusade," calling it "an unprecedented and unconstitutional abuse of power by" Dems.

The letter was published on the eve of the expected House impeachment vote, largely along party lines.

Instead of wanting Trump held accountable for legitimate reasons, targeting him is all about winning an election he was supposed to lose, wanting improved relations with Russia, perhaps as well for being the first sitting US president to meet with a North Korean leader — even though summit talks accomplished nothing.

His high crimes of war and against humanity are ignored. The same goes for betraying the public trust by serving monied interests exclusively at the expense of ordinary people — the vast majority of congressional members supporting these policies.

There's no just cause for charging Trump with abuse of power over his dealings with Ukraine, its president refuting false claims made by Dems.

Nor did DJT's actions obstruct Congress for refusing to participate in the sham impeachment process that's one of the most shameful political spectacles in US history.

Trump's letter correctly said that articles of impeachment against him include "no (real) crimes, no misdemeanors, and no offenses whatsoever."

The Executive "shall have Power, by and with the Advice and Consent of the Senate, to make Treaties (and) appoint ambassadors…"

The Constitution includes nothing about conducting foreign affairs, though traditionally presidents conduct the nation's foreign policy, including relations with their counterparts abroad.

Supreme Court Justice Robert Jackson (1941 - 1954) once said "presidential powers are not fixed but fluctuate depending upon their disjunction or conjunction with those of Congress," adding:

In the absence of congressional involvement, the executive "can only rely upon his own independent powers," calling these times a "zone of twilight" — neither authorized or prohibited by the Constitution.

Ideally, the president and Congress should work cooperatively in conducting the nation's domestic and foreign affairs — clearly not what's going on now with Dems hellbent to weaken and delegitimize Trump for the wrong reasons, ignoring the right ones.

In the letter written for him that he clearly approved, Trump said Dems "turn(ed) a policy disagreement between two branches of government into an impeachable offense."

"(I)t is no more legitimate than the Executive Branch charging members of Congress with crimes for the lawful exercise of legislative power."

He highlighted the fact that Biden as vice president "used his office and $1 billion dollars of US aid money to coerce Ukraine into firing the prosecutor who was digging into the company paying his son millions of dollars."

At the Council on Foreign Relations, he bragged about it, saying:

In congressional testimony, Law Professor Jonathan Turley accused Dems of "doing precisely what (they're) criticizing (Trump) for doing" — their articles of impeachment an "abuse of power."

Straightaway after Trump was sworn in as president, the Washington Post headlined: "The Campaign to Impeach President Has Begun."

Last week, Pelosi said the impeachment process has been ongoing for "two and a half years" — beginning long before Trump and Zelensky spoke by phone.

Trump's letter stressed the above, adding:

Rep. Adam Schiff "cheated and lied all the way up to the present day, even going so far as to fraudulently make up, out of thin air, my conversation with President Zelensky of Ukraine and read this fantasy language to Congress…"

Robert Mueller's Russiagate witch-hunt laid an egg, discovering nothing connected to the mandate of what was probed, the Ukrainegate spinoff faring no better.

There's plenty to hold Trump accountable for, major wrongdoing left unaddressed in the articles of impeachment against him.

No US president was ever impeached for foreign policies congressional members disapproved of.

Targeting Trump for the wrong reasons persists — the cross he'll likely bare for the rest of his time in office, including if reelected next year.